A banner was unfurled at the Trump Tower Hotel in Las Vegas saying "Trump betrayed and murdered the Kurdish people." 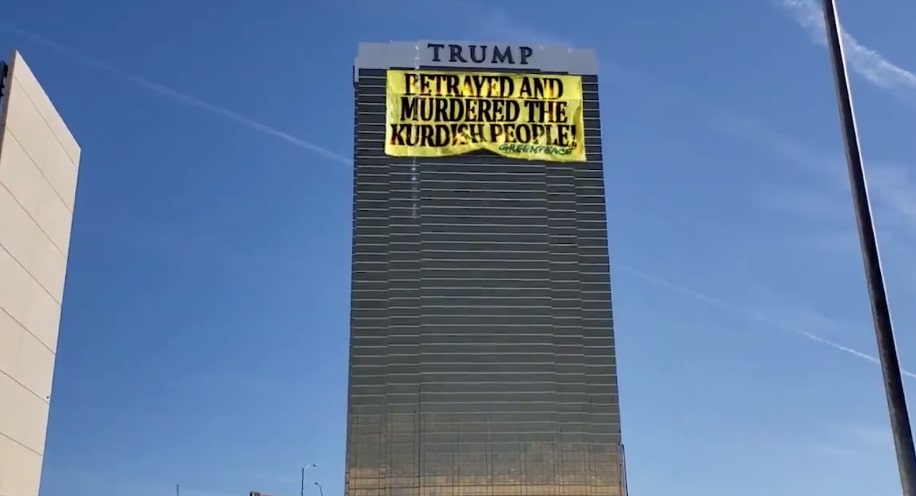 A video shows the “banner” seemingly being unfurled at the Trump Towers Hotel in Las Vegas bearing the message, “Trump betrayed and murdered the Kurdish people” — a reference to the president’s decision to allow Turkish forces to attack the Syrian Democratic Forces, a Kurdish group that had been a valuable ally to the United States in fighting the Islamic State terrorist group.

Within a day, the video had been spread more than 15,000 times on Twitter:

The activist group Greenpeace — which has raised a banner at a Trump property in the past — noted that it was not behind this latest digital protest. The original poster also appeared to acknowledge that the video was not real:

Whether that banner was physically or digitally put there is irrelevant – the statement is MADE, the public outrage is REAL and the message is spread.

If you're following me, I'd think you'd already understand that.

The same day that the video was published, Trump doubled down on his decision to abandon the Kurdish forces, saying that the SDF “didn’t help us in the Second World War, they didn’t help us with Normandy.”

The remark was apparently drawn from the right-wing blog TownHall.com, though the president only said it came from “a very very powerful article today.”