Summary of eRumor:
eRumor claiming to be written by To The Point News about a brand new Airbus A340-600 that crashed into a retaining wall on a pre-delivery test.  The aircraft crew were all Arabs from

Abu Dhabi Aircraft Technologies and when one of them shut off a warning alarm it caused the computer to shut off the brakes while the plane was at full throttle.

The Truth:
There was an aircraft accident but it did not happen in the manner described in the email.  According to a safety article written on November 16, 2007 for Aviation.com the Aircraft did loose control and hit a blast wall and the French air accident investigation authority opened an investigation to rule out pilot error.  At the time of our investigation there was no report posted. 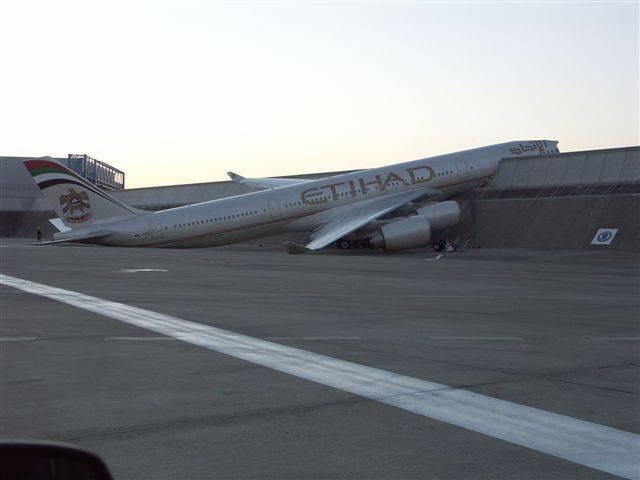 A brand new Airbus A340-600 just painted in Etihad Airways’ colors was being readied for delivery in November 2007.   The jet was at the manufacturing facility in Toulouse, France and undergoing some pre-delivery tests. It was to be delivered to the Abu Dhabi-based airline the following week.   Nine crew members were on board, one of whom was an employee of Abu Dhabi Aircraft Technologies, a service provider to Etihad Airways.  The nationalities and affiliations of the other crew members have not been revealed. .

According to the article, “During the engine run-up test, the aircraft’s landing gear jumped over the chocks wedged against its tires to hold the A340-600 in place — along with its brakes — against the propulsive force developed by its four Rolls-Royce Trent 500 engines. At maximum takeoff power, the A340-600’s four engines develop a total 224,000 pounds of thrust.”   The aircraft ran over a blast fence, causing causing extensive damage.   Five of the nine people onboard were injured, including the employee from Abu Dhabi Aircraft Technologies.

Attribution of this particular eRumor claiming to be from To The Point News is fiction!  The story did appear on the To the Point News web site, but the writer of this eRumor slanted it to be insulting to Arabs..
Click for Aviation.com story
Click for tothepointnews story
posted 09/09/98