Albert Einstein spoke at Lincoln University in 1946, and said "The separation of races is not a disease of colored people but a disease of white people. I do not intend to be quiet about it."

In February and May 2021, Facebook users shared a photograph of Albert Einstein along with a quote — “The separation of races is not a disease of colored people but a disease of white people. I do not intend to be quiet about it”:

Nothing to see here, just Einstein teaching at a black college.

Turns out one of the smartest dudes in history was woke as fuck. Used to say shit like “The separation of races is not a disease of colored people but a disease of white people. I do not intend to be quiet about it.”

He even refused to speak at white universities and pretty much exclusively went to black colleges at the end of his career.

These are the parts of history they don’t tell you. They try to erase the fact that we are still fighting the same fight. ✊🏿

Both posts featured the same image of Einstein at a chalkboard, surrounded by Black students: 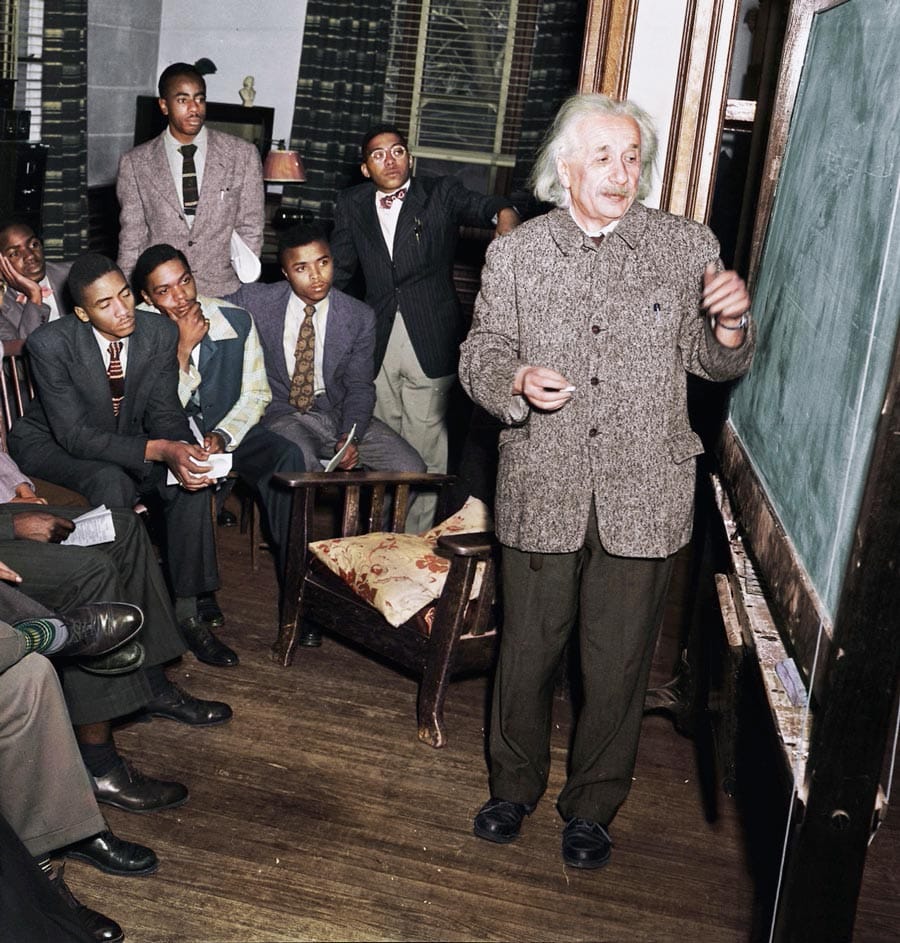 A reverse image search turned up a version in black and white, shared to Reddit’s r/pics in 2017:

Albert Einstein giving a lecture at Lincoln University in 1946. from pics

That iteration did not involve Einstein’s purported quote about the “separation of races” not being a “disease of colored people but a disease of white people,” nor his attestation he would not “be quiet about it.” A September 2017 iteration of the photograph appeared to have been unpublished, for no specified reason.

However, Lincoln University published a press release in June 2017 not only about the image, but its obscure nature and later emergence:

Lincoln University was featured on a national television broadcast on May 29 [2017]. On the long-running PBS show Antiques Roadshow, a guest, identified only by her first name Cecily, brought rare photos of Albert Einstein to a filming in Orlando, Florida. The photos were taken by Cecily’s husband in May 1946 who was a freelance photographer at the time of Einstein’s visit to Lincoln University’s campus when Einstein received an honorary doctorate and took questions from students during a classroom visit.

Seventy years after Einstein’s visit, during the June 2016 television taping, PBS host Martin Gammon appraised Cecily’s collection of Albert Einstein-related memorabilia for between $7,000 and $9,000 at auction.

In April 2007, Harvard University corroborated the remarks made by Einstein about racism in the United States:

Here’s something you probably don’t know about Albert Einstein.

In 1946, the Nobel Prize-winning physicist traveled to Lincoln University in Pennsylvania, the alma mater of Langston Hughes and Thurgood Marshall and the first school in America to grant college degrees to blacks. At Lincoln, Einstein gave a speech in which he called racism “a disease of white people,” and added, “I do not intend to be quiet about it.” He also received an honorary degree and gave a lecture on relativity to Lincoln students.

The reason Einstein’s visit to Lincoln is not better known is that it was virtually ignored by the mainstream press, which regularly covered Einstein’s speeches and activities. (Only the black press gave extensive coverage to the event.) Nor is there mention of the Lincoln visit in any of the major Einstein biographies or archives.

In fact, many significant details are missing from the numerous studies of Einstein’s life and work, most of them having to do with Einstein’s opposition to racism and his relationships with African Americans.

That these omissions need to be recognized and corrected is the contention of Fred Jerome and Rodger Taylor, authors of “Einstein on Race and Racism” (Rutgers University Press, 2006). Jerome and Taylor spoke April 3 at an event sponsored by the W.E.B. Du Bois Institute for African and African American Research. The event also featured remarks by Sylvester James Gates Jr., the John S. Toll Professor of Physics, University of Maryland.

In 2018, the Washington Post addressed Einstein’s appearance at Lincoln University in an editorial contrasting his public expressions and his private diaries:

In 1946, Albert Einstein stood in front of students at one of the oldest historically black colleges in the United States and decried the oppression of African Americans.

But there’s another side to Einstein that perhaps people did not know then.

Travel diaries he wrote during a months-long voyage in the 1920s reveal that in his private moments, the Nobel-winning physicist portrayed people of other races, such as Chinese and Indians, in a stereotypical, dehumanizing way. Einstein’s unfiltered musings about the people he saw and interacted with during his journey show that even the civil rights icon and “paragon” of humanitarianism harbored racist thoughts about those who did not look like him, said Ze’ev Rosenkranz, senior editor and assistant director of the Einstein Papers Project at the California Institute of Technology.

As such, the of Einstein at Lincoln University in 1946 was real (although perhaps it was colorized), but it didn’t appear to surface until 2017. Einstein’s “separation of the races” quote was widely corroborated, and included in a Harvard University press release in 2017. The post’s claims were accurate, but like many historical figures, Einstein’s legacy in that regard was complicated, at best.