Rep. Alexandria Ocasio-Cortez achieved a number of things in science and economics before she was elected, and a small asteroid is named after her. 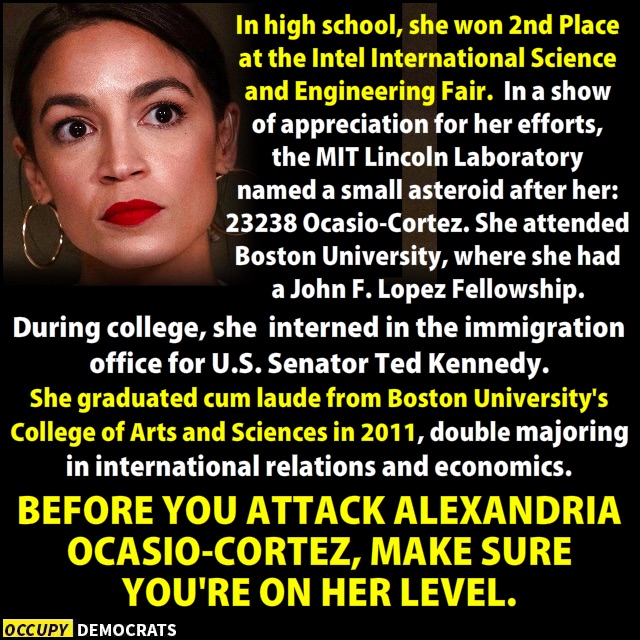 Next to a photograph of Ocasio-Cortez, the meme’s text read:

In high school she won 2nd place at the Intel International Science and Engineering Fair. In a show of appreciation for her efforts, the MIT Lincoln Library named a small asteroid after her: 23238 Ocasio-Cortez. She attended Boston University, where she had a John F. Lopez Fellowship.

BEFORE YOU ATTACK ALEXANDRIA OCASIO-CORTEZ, MAKE SURE YOU’RE ON HER LEVEL.

Although the meme made numerous biographical claims, it did not include any citations. However, an attached status update read “Public Service Announcement!”

It first claimed she won second place at the Intel International Science and Engineering Fair (ISEF) while she was in high school. That claim is true, per a November 2018 article, “Intel ISEF alumna headed to Capitol Hill”:

Congratulations to Alexandria Ocasio-Cortez (ISEF 2007) on winning her election to represent New York’s 14th Congressional District! In 2007, Alexandria placed second in the International Science and Engineering Fair in the Microbiology category with her project on the effect of antioxidants on roundworms.

As a science student at Yorktown High School, Alexandria tested the effect of various antioxidants on the lifespan of roundworms, known as Caenorhabditis elegans.

Claim two is that 23238 Ocasio-Cortez is a small asteroid named after the congresswoman, which is also true, according to NASA’s Jet Propulsion Laboratory and described in a tweet she published in June 2018:

Claim three: Ocasio-Cortez attended Boston University and had a John F. Lopez fellowship. This is true. The National Hispanic Institute has a page (“JFL Fellow/John F. Lopez Summer Internship”) and the organization’s magazine reported in 2017:

Ocasio-Cortez is accustomed to beating the odds and forging forward with determination. She was tutored well by her father throughout her early years, and kept close company with her mother, grandmother, and younger brother. At just 17, her father suddenly became ill and died, but bearing the burden of that heavy and personal loss, she enrolled at Boston University, completed her program in four years, and graduated fourth in her class.

As a high school student, she participated in the NHI Lorenzo de Zavala Youth Legislative Session and became intensely involved in the organization’s work, going on to serve as an LDZ Secretary of State and a John F. Lopez Intern while in college.

The fourth claim is that Ocasio-Cortez interned for Sen. Ted Kennedy’s immigration office while in college. Ocasio-Cortez referenced that internship on Twitter, it appears in a Biography.com page about her, and in a 2018 interview with Jeremy Scahill, she explained:

And 10 years ago I had worked in Ted Kennedy’s immigration office and he, to his credit, he had one of the best immigration constituent service offices in the country. And I would be handling some of these cases, and women and families would call me in a total panic because their husbands were scooped off the street in the middle of the day or they came home and there are literally stories of people coming home to their front doors open, and you know their stove flames are still on and their families are missing. And our incumbents created that system.