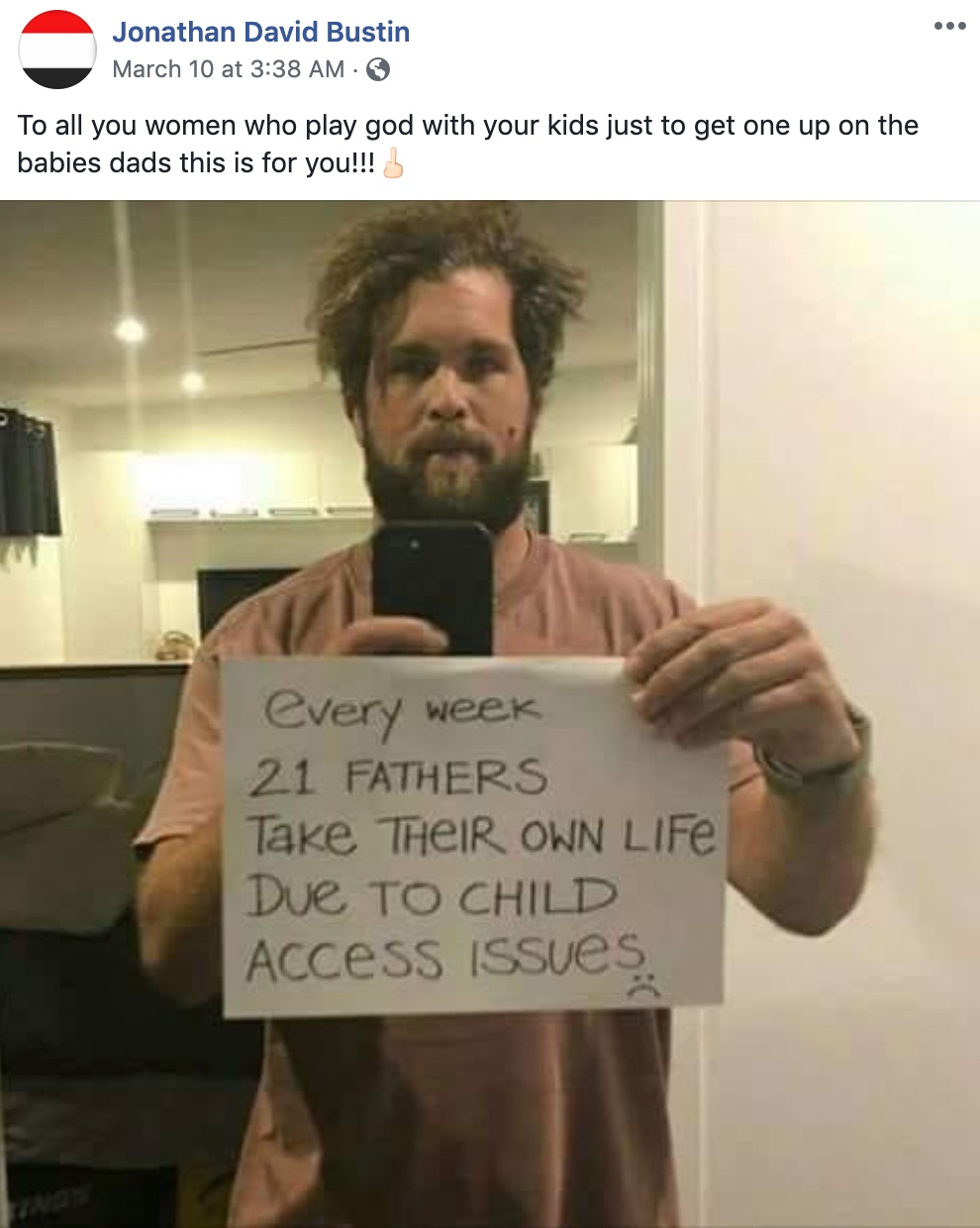 To all you women who play god with your kids just to get one up on the babies dads this is for you!!!🖕🏻

Neither citations nor a source were included alongside the image and commentary. One initial unclear aspect of the claim was its scope — was it intended as a global figure, or did it represent suicide deaths in a specific country? And by what means was this purported statistic reached? Commenters largely accepted the claim as fact, and did not offer up any clues about possible sources for the figure. The image was shared to Reddit’s r/pics in February 2019 (“There is a socially accepted gender bias in the family court system, and I just wanted to remind everyone that its not ok”), and received significant traction.

The specific claim that 21 fathers died by suicide each week due to custody issues was fact-checked by TheConversation.com in November 2017, which provided some details about the original version of the claim. According to that piece, the claim originated in Australia (not the United States or United Kingdom) in 2017.

Specifically, it originated from a member of Australia’s far-right political party One Nation:

But the truth of the matter is, we’ve got to see what is going on in that family unit, because there are up to 21 fathers killing themselves every week in this country and people need to be aware of that.

Discussing One Nation’s domestic violence policy at a campaign event on the Sunshine Coast, One Nation Queensland leader Steve Dickson said “up to 21 fathers” were taking their lives in Australia every week.

The same number was cited in a media statement quoting Tracey Bell-Henselin, the party’s candidate for the Sunshine Coast seat of Glass House.

Bell-Henselin said there had been “an increase in male suicide, with estimates as high as 21 suicides per week because of the family breakdown nationally.”

This earlier iteration (emphasis ours) included immediate caveats that did not appear in subsequent versions — for example, that the quoted number of suicides was the purported high end of an estimate (“up to” is not “the same as”) and that originally the claim was about “family breakdown,” an exceptionally nebulous term that was exceptionally vague and may have covered custody disputes, but also divorce and myriad other issues relating to familial dysfunction.

Observing that there were “no data available to support Steve Dickson’s assertion” and that “national statistics do not provide detail to show whether men who have died by suicide were fathers,” TheConversation.com added that their attempts to validate the claim were unsuccessful, and that its source was, at best, a number based on nothing but anecdotes and guesswork:

Asked for sources to support Steve Dickson’s and Tracey Bell-Henselin’s claims, a One Nation spokesperson sent The Conversation a statement which quoted Dickson as saying:

I am being told by ambulance officers that they are attending more and more cases where a man has taken his own life after being through the family court system.

The Conversation also included the additionally dubious context of the comments at their origin in November 2017. At the time Dickson made them, he was arguing to weaken domestic violence protections:

Queensland One Nation leader, Steve Dickson … claimed credit for One Nation’s domestic violence policy, which potentially could allow fathers to continue to see their children, even if an emergency protection order had been awarded.

“Many people say that domestic violence is only about the lady,” Dickson said.

“We absolutely respect women, I’ve been married for 31 years, as we all should respect women. But the truth of the matter is, we’ve got to see what is going on in that family unit, because there are up to 21 fathers killing themselves every week in this country and people need to be aware of that.

[Dickson then addressed] what he termed “the controversial safe schools program” which One Nation have vowed to ban if they win the balance of power.

“Our state is being infiltrated by mad lefty people who want to destroy the family unit. That is the question you should be asking.”

Skepchick’s Rebecca Watson reiterated the original November 2017 fact check in a February 2019 post, adding that the claim did not hold for the United States either:

But does the system keep men away from their children? The research says absolutely not, at least here in the United States. More than half the time, fathers don’t even ask for custody. When they do, the cases that end up in court are vanishingly small: only about 5% of all custody cases are decided by a court. And in those cases, the gender of the parent isn’t significant according to research like an in-depth meta-analysis from 2013, which found that the most important factors in gaining custody were mental stability, criminal history, and financial resources. They did find that in some cases fathers (but not mothers) were less likely to get sole custody if they were poor, but mothers (and not fathers) were less likely to get custody if they had ever been hospitalized for a psychiatric condition.

The population of Australia was estimated at approximately 24.6 million to the United States’ 325.7 million, which would skew the figure of 21 suicides quite a bit if it was accurate, which it was not. Adjusted, the 21 suicides weekly in Australia would average 279.3 in the United States, at which point the claim beggars belief even more.

The claim that 21 fathers died by suicide each week due to “child access issues” fell flat on a number of levels. First, no such data has ever been collected by any agency in the United States or Australia, the country in which the dubious claim was first made. Further, research indicates that absent factors such as fathers declining custody, few disparities exist in custody courts between women and men in either country.