In mid-2021, as the Delta variant rapidly spread among unvaccinated populations across the United States and public officials began publicly flirting with the prospect of still more measures to quell the spread of the next phase of the COVID-19 pandemic, local and national news organizations began to turn their attention to violent, emotionally charged spectacles played out by people claiming to be opposed to mask mandates.

In one such event on July 22 2021, anti-masking activists mocked and attacked a breast cancer patient outside a Los Angeles clinic:

Protesters then ask [cancer patient Kate Burns] if she’s familiar with the Civil Rights Act. “Get on the right side of history,” one man says. “You’ve got a lot of anger you need to release. It’s a very dangerous emotion.”

Tensions continued to rise as more far-right, anti-maskers arrived on the scene. A small group of anti-fascists also arrived, and got into altercations with the far-right. A woman holding a megaphone shoved Burns, and then punched her several times. Burns said, on social media, that the woman hit her in the chest and struck her scars.

Thursday was the second time that anti-maskers had targeted that particular breast cancer clinic over its mask policy. The ugly scenes and casual political violence that unfolded there on both occasions have become troublingly common across the U.S….

Increasingly confrontational scenes in which apparently aggrieved people make loud scenes for reasons they do not seem to be able to fully describe or explain do indeed seem to be more and more common — and not just in the United States.

But why? And how does such activity come to be? The short answer, by harnessing the power of organized phone calls, social media groups, and disinformation networks, does not reveal much about the actual anatomy of such a campaign.

The longer answer is this: Political groups have created a modular form of activism that makes everything from signs to messaging interchangeable, simple, and downloadable. That is not new, nor is it very exciting. Organizing networks for messaging and protesting purposes is a very common practice.

But that common and relatively harmless practice is easily weaponized by disinformation campaigns. When modular activism meets existing right-wing disinformation networks, it becomes inauthentic by definition; bad faith political entities are now tapping in to the resentment and rage that they have deliberately incited and provoked in entire groups of like-minded conspiracy theorists in order to get them to show up at protests to make scenes. The topics and ideas behind them do not matter. What matters is the outrage.

To put it another way, the algorithm and propaganda networks that were first established for QAnon and other white supremacist and insurrectionist disinformation campaigns have now been turned over to promoting and planning events to set up local and state power grabs.

Before the possible return of a mask mandate, many of these protests were around another issue its attendees seemed to be unable to fully articulate, critical race theory (or maybe transgender rights, or vaccines):

Two arrests made at the Loudoun County, Virginia school board meeting after it was declared an unlawful assembly and some parents here to protest against critical race theory and a transgender policy refused to leave right away #CriticalRaceTheory pic.twitter.com/dsZDrqJ0Gp

Over time, it becomes obvious that the same groups of people have been showing up to stage these scenes, as can be witnessed with that group of people in Los Angeles at Cedars-Sinai — the same group that attacked cancer patient Kate Burns — shouting invective against masks, vaccines, quarantines, “antifa,” and pedophiles, while waving “Recall Newsom” flags:

Additional note: many of the same people involved in the anti-mask have been involved in previous similar incidents, like this one where a woman told children wearing yalmulkes inside a Target on 1.10.21 that “a Holocaust is coming, you are contributing to a new Holocaust.” pic.twitter.com/9n4mqPYEyT

It is easy to spot authentic versus inauthentic protests.  Authentically organized protests, where the people showing up actually care about the topic they are demonstrating for or against as opposed to simply trying to upset people they disagree with politically, stay on message and while they can be emotional, they lack the quality of inarticulate, braying rage that is all too familiar to anyone who has covered an inauthentically organized event.

There are also visual cues and slogans that bear a more than passing resemblance to white supremacist, sovereign citizen, anti-vaxxer, or QAnon catchphrases, by design:

HAPPENING NOW: People are rallying to "Save Our Students" ahead of the @vbschools meeting. Mainly they want face coverings to be optional in the upcoming school year. Probkem is…that's ultimately up to @VDHCommissioner @WAVY_News pic.twitter.com/ZQ1INZ1nFW

A closer look at the “Save Our Students” rally (which, as mentioned, deliberately echoes the “Save Our Children” QAnon campaign) turns up some interesting conspiracy theory detritus characteristic of the career gadflies who populate inauthentically organized protests, such as the all-purpose sign behind the speaker in this image: 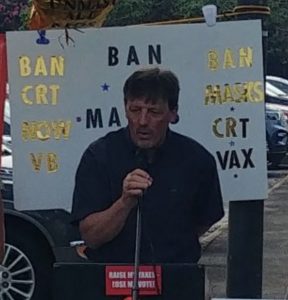 Multiple groups with their own political agendas are coordinating these campaigns for their own purposes. The far-right Heritage Foundation — which has pushed the anti-critical race theory disinformation campaign from its inauthentic beginning — has a website promoting “Heritage Action for America,” a rotating stable of campaigns that anyone can use for astroturfing, if they’re so inclined.

For example, their “issue toolkit” page on “critical race theory” (which has been engineered into a right-wing euphemism for any sort of curriculum delving into institutional racism in the United States) contains the following suggested “talking points.” As with their various signs and slogans, these may sound familiar to anyone following the inauthentic moral panics and dramas unfolding in policy discussions and school board meetings:

That page, like most of the “action toolkit” entries, also contains directions on who to call, scripts for what to say, and social media posts for Heritage’s “Sentinels” to copy and paste on social media (it is easy to find multiple examples of this in practice by searching for any of the text in any of these campaigns on social media):

This can be done for any topic, effectively offering the illusion of popularity for policies or ideas that do not exist in reality, but this construct is augmented by real-world events staged by people who in actuality have little loyalty to the ideas they pretend to espouse, leading to messaging that is, to say the least, muddled and confusing (Heritage Action and its dozens of affiliated groups also offer similar toolkits for coronavirus legislation, the Equality Act, immigration, and many others, complete with scripts for phone calls and social media posts.)

However, the stunts and scripted phone calls and tweets seem to be enough to convince newsrooms and politicians that they are legitimate, and thus these events are being used to push changes across the United States. As of July 2021, very little coverage of the many, many events that have been planned or interrupted by this type of activity over the years notes its obvious inauthenticity, or the fact that it uses established disinformation networks to do. Nor do many reporters or pundits observe that this behavior spiked during the Trump administration and continues into the Biden administration, as the far right once again convulses to regain power.

The harm in this, of course, is that it is forcing disinformation into policy that deliberately elides the actual will of the people — a profoundly anti-democratic campaign. In other words, this is not a sign of emotions running high or an increasingly polarized country. It is a relatively small group of activists who explicitly intend to push policies into reality that are deeply unpopular in at best and actively harmful at worst. They are intentionally being pushed by and for the far right in order to get white supremacists, anti-vaccine activists, and other conspiracy theorists into power at all levels — so that they can enact whatever agenda against Americans they like.