More Americans die every year from a lack of affordable healthcare than by terrorism or at the hands of undocumented immigrants.

On December 20 2018, the Facebook page “Teanderthal Party” posted the following meme about healthcare, “illegal immigration,” terror attacks, and the mortality rate in the United States: 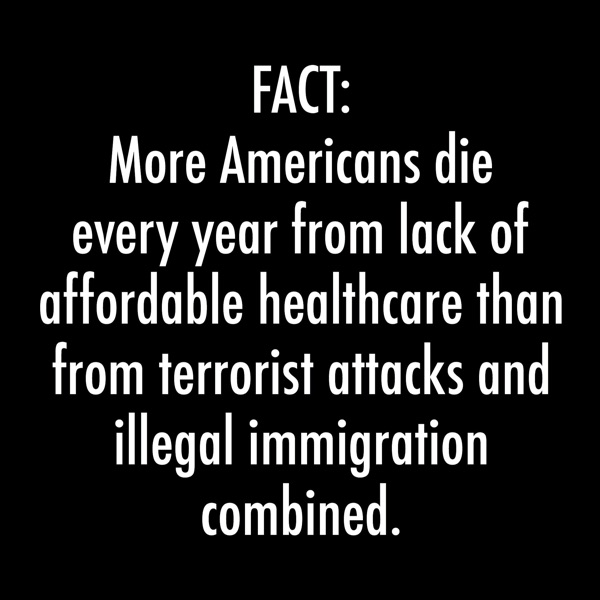 More Americans die every year from lack of affordable healthcare than from terrorist attacks and illegal immigration combined.

Teanderthal Party didn’t share any commentary alongside the meme, nor was it accompanied by any citations, sources, or even references backing the point the page was attempting to convey by sharing the meme. Presumably, its creators singled out “illegal immigration” and “terrorist attacks” as common political fears in the United States, and it aimed to suggest that those concerned about those dangers were possibly likelier to die from lack of access to healthcare services. (But without additional context, that remains a guess as good as any.)

Regardless of the page’s editorial intent in sharing the meme, its claims remained fact-checkable — to a degree. However, questions remain: If fact-based resources were consulted to compose the meme, did its creator simply reference 2018 (the year in which it was posted to the page)? Was it created and based upon an earlier year? And how far back should we go to examine the claim’s truthfulness?

Further, did the meme intend to reference terrorism-related deaths of Americans within the United States, or did it include Americans killed while visiting other countries? Were combat deaths involving the Islamic State (for example) included in the creation of the meme? And with respect to the number of “Americans [who die] … from illegal immigration,” did it mean people murdered by undocumented immigrants, or something else? With such nebulous benchmarks, answering these questions was a dicey prospect.

Finally, the precise meaning of dying “from lack of affordable healthcare” was undefined. Would such a number encompass people who succumbed to illness or injury because they were unable to pay for treatment, people whose health declined because they did not maintain any form of medical insurance, or some other category? Would any other scenario be included in the calculation of deaths due to a lack of affordable healthcare?

Although vague, the meme pinpointed three metrics of debatable description with which we will try to approximate a truth rating:

The first number might be the easiest of the bunch, due to related research appearing from time to time in the news. Fact checkers PolitiFact and FactCheck.org have both tackled variations of the claim, the latter with no rating, while the former assigned a “Pants on Fire” decision to a claim no one died from a lack of access to healthcare.

Figures from the American Journal of Public Health [PDF] published in 2009 often serve as a benchmark number for deaths linked specifically to a lack of health insurance in American adults. In their study, “Health Insurance and Mortality in U.S. Adults,” researchers provided several numbers in different years prior to 2009, estimating that 46 million Americans were uninsured. For the year 2000, researchers estimated 27,424 deaths due to a lack of health insurance among adults in the United States. For 2005, using the same methodology, they calculated between 35,327 deaths in non-elderly people and 44,789 deaths overall.

The study was conducted at Harvard Medical School and Cambridge Health Alliance, and was based on data obtained from the Centers for Disease Control and Prevention. In a September 2009 Harvard Gazette article about the findings, researchers said that the larger 44,789 figure was conservative at the time of its publication:

Steffie Woolhandler, study co-author, professor of medicine at Harvard Medical School, and a primary care physician at Cambridge Health Alliance, noted: “Historically, every other developed nation has achieved universal health care through some form of nonprofit national health insurance. Our failure to do so means that all Americans pay higher health care costs, and 45,000 pay with their lives.”

“Even this grim figure is an underestimate — now one dies every 12 minutes.”

A major change to policy in the United States took place between the publication of those figures in 2009 and the meme’s circulation in December 2018 — the passage of the Patient Protection and Affordable Care Act (known colloquially as “Obamacare”) in March 2010. At the time the paper quoted above was published, 46 million American citizens lacked health insurance.

Although figures on deaths due to a lack of health insurance in several given years were relatively easy to find, the other two metrics proved far harder to decisively pin down. Nevertheless, it seemed possible to arrive at a simple “true or false” based on disparity alone.

The Washington Post located the origin of the 63,000 murders figure in June 2018:

We traced that number back to its source. On May 5, 2006, [Rep. Steve] King posted an article on his official website in response to national pro-immigration protests held that month. The post is a catalogue of anti-immigrant scaremongering … he explained the math behind his numbers.

That figure he got from a Government Accountability Office report issued in April 2005 …King figured (admitting that [his referenced] number would go up or down a percentage point or two):

In other words, since 28 percent of the prisoners were immigrants in the country illegally, they must also therefore have committed 28 percent of each and every crime! Quod erat demonstratum. Recognizing that this sounded like a lot even at the time, King rationalized it by asserting that for every undocumented immigrant in the country we know about, two or three sneak in without our knowing it. Here’s how we know that’s not true.

There is an almost impossibly large number of problems with King’s argument.

The first is that, of course, crime is not evenly distributed among populations. If 10 percent of prisoners are named John, that doesn’t mean that people named John commit 10 percent of murders. Many of those undocumented immigrants in federal custody were probably there for a very specific type of crime: felony immigration violations. Very, very few native-born Americans were there for that. In fact, in 2014, half of criminal arrests were for immigration violations. Since the GAO data are only for federal prisoners, that’s significant. (It’s also worth noting, as a reader did, that federal prisoners make up only a small percentage of the entire prison population.)

The Post concluded that “King seems to have basically made the number up more than a decade ago,” adding that the Congressman did not even stick with the same figure himself in later reference to the subject:

In 2011, King presented a resolution that offered a different calculus.

“According to the Government Accountability Office,” it read, “there have been 25,064 homicide arrests of criminal aliens since 1955.”

We were unable to locate any trustworthy estimate for the number of Americans killed (intentionally or not) by undocumented immigrants in any given year. And even if that number had been correct instead of specious, 63,000 deaths divided by 17 years equals 3,706 deaths annually — a figure dwarfed by the lowest number of deaths from lack of health insurance by any metric in any year.

There is no basis whatsoever to assume the “63,000 since 2001” figure was based in anything at all, but if we apply King’s second formula (1.2 per day) to an annual basis, we get 438 deaths a year, which we can round up to 500 for comparison purposes.

Finally, we come to the number of Americans killed annually in terrorist attacks. The National Consortium for the Study of Terrorism and Responses to Terrorism (START) provided figures [PDF] for the number of Americans killed both on and off American soil in terrorist attacks between 1995 and 2016. In that 21-year period, START calculated 3,393 deaths in total in the United States, 3,277 American fatalities on US soil, and 3,658 total American fatalities due to terrorism abroad.

Those figures included all deaths during the attacks of September 11, 2001, which totaled 2,902. Averaging the largest number of the three (3,658) per year without adjusting for the outlying events of a single large-scale attack provided a figure of 174 deaths. Subtracting 9/11 from the larger figure and again calculating the number provided an annual average of 36 Americans killed by terrorists each year.

In summation, the lowest number of estimated deaths among Americans due to a lack of health insurance in any given year (regardless of the Affordable Care Act’s passage in 2010) totaled more than 27,000. We found no solid figures for the number of Americans killed by undocumented immigrants in any given year, but even the incorrect number of 3,706 annual deaths based on the baseless 63,000 deaths-since-9/11 figure did not approach the number of deaths from lack of access to affordable healthcare. And combining that inaccurately large number with the unadjusted number of terrorism-related deaths (174 deaths per year), the highest comparative total was 4,881 deaths due to undocumented immigrants and terrorism. But once again, the latter two numbers were far likelier under 700 deaths total combined, versus 27,000 deaths on the first count.

The meme’s statement that more people die every year from a lack of affordable healthcare than terrorist attacks or “illegal immigration” is true any way you slice it. The latter two numbers in any permutation (even when wildly inflated) come nowhere near matching the very credible figures informing the healthcare deaths estimate, and that remains true regardless of the meme’s extremely poor explanation of its own claims.