Baby boomers' Japanese counterparts lined up to endanger themselves to mitigate damage done by radiation, highlighting stark differences from generational attitudes in the United States.

On December 22, 2018, the Facebook page Ethan Berk shared an image referencing baby boomers, older people in Japan, and the attitudes of the two groups: 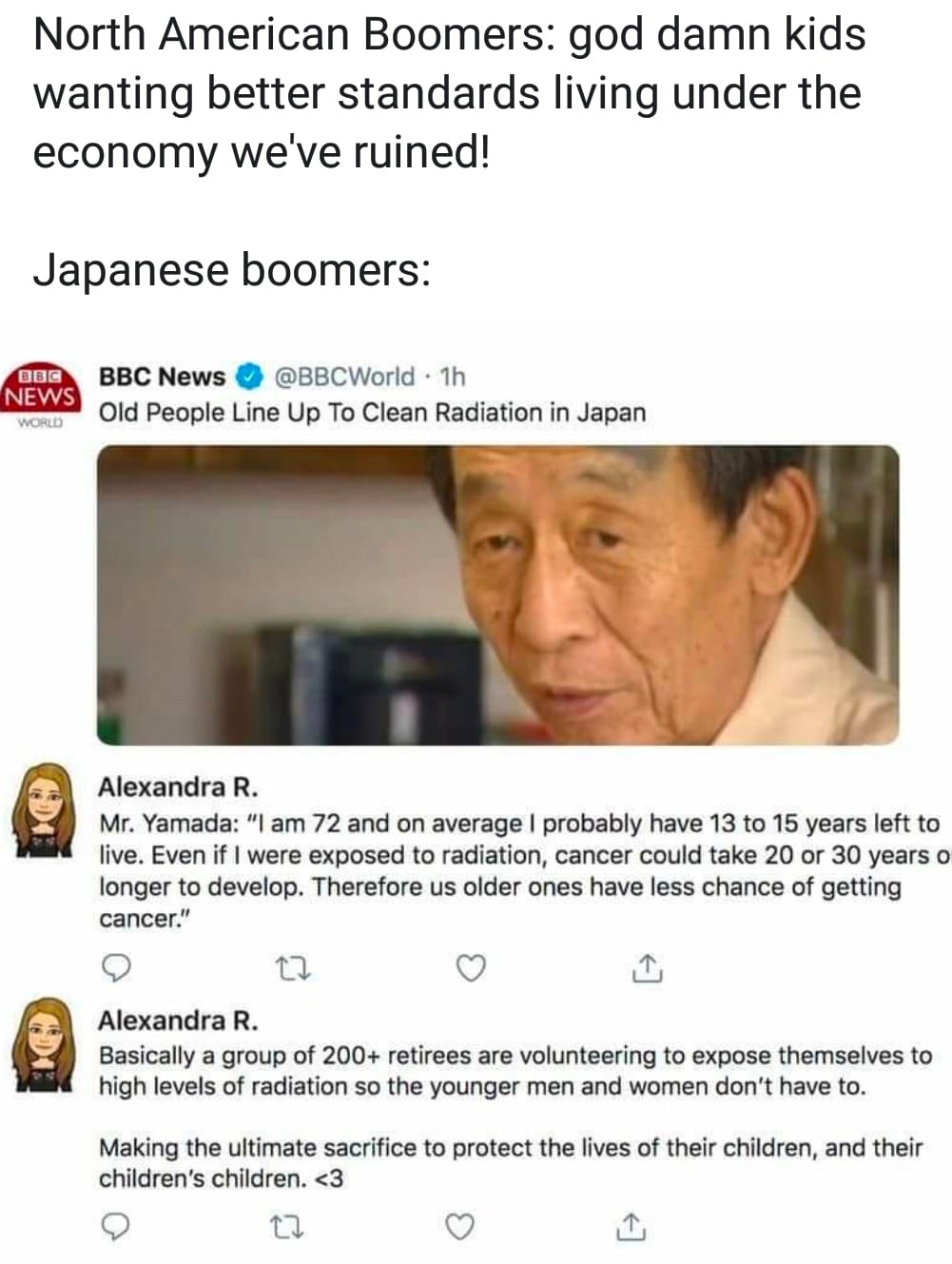 The image involved several components, including commentary at the top, a purported tweet from BBC News, and subsequent remarks made in reference to the tweet. Together, it read:

Japanese boomers: [image and link to a @BBCWorld article titled “Old People Line Up To Clean Radiation in Japan”]

Alexandra R.
Mr. Yamada: “I am 72 and on average I probably have 13 to 15 years left to live. Even if I were exposed to radiation, cancer could take 20 or 30 years [or] longer to develop. Therefore us older ones have less chance of getting cancer.”

Alexandra R.
Basically a group of 200+ retirees are volunteering to expose themselves to high levels of radiation so the younger men and women don’t have to.

There was a lot to unpack from the mishmash of information and opinions the image contained. A starting point was the usage of the term “baby boomers,” technically “a person born in the U.S. following the end of World War II (usually considered to be in the years from 1946 to 1964).” In Japan, a post-WWII “baby boom” occurred between 1947 and 1949 [PDF], a shorter period resulting in a smaller cohort known as Dankai no Sedai.

Since the emergence of the baby boomer generation, Japan’s economy and society have changed significantly to accommodate them as they grew up. The first issue they faced was a food crisis. Many struggled to survive because food was in extremely short supply. As they finally came out of their state of infancy, Japan’s economy started to recover with the special procurement boom due to the Korean War. The Japanese economy started achieving the miraculous growth that turned the country into an economic superpower.

Purported attitude characteristics shared by specific generations is frequently a topic of debate on social media, but presumably the perspective of those born after the war in Japan varied a great deal from that of those born in the United States.

Following the comment at the top of the image what appeared to be a screenshot of tweet published by @BBCWorld linking to an article titled “Old People Line Up To Clean Radiation in Japan.” Searching by title led to two results that didn’t match entirely with the presentation of the image, and we were unable to locate the referenced @BBCWorld tweet, which appears not to exist at all.

In May 2011, the BBC published an article with the headline, “Japan pensioners volunteer to tackle nuclear crisis,” reporting that more than 200 Japanese pensioners volunteered to help deal with the Fukushima power station following the Tōhoku earthquake and subsequent tsunami in March 2011.

The comments at the end of the image above (attributed to “Alexandra R.”) appeared to originate with that specific article:

It was while watching the television news that Yasuteru Yamada decided it was time for his generation to stand up.

No longer could he be just an observer of the struggle to stabilise the Fukushima nuclear plant.

The retired engineer is reporting back for duty at the age of 72, and he is organising a team of pensioners to go with him.

“Even if I were exposed to radiation, cancer could take 20 or 30 years or longer to develop. Therefore us older ones have less chance of getting cancer.”

Mr Yamada is lobbying the government hard for his volunteers to be allowed into the power station. The government has expressed gratitude for the offer but is cautious.

Interestingly, the headline featured in the purported @BBCWorld tweet (“Old People Line Up To Clean Radiation in Japan”) was real, but it was used not by BBC, but by the outlet Gizmodo in May 2011. That piece was brief and did not include the quotes attributed to Yamada:

Talk about a sacrifice that will warm your heart. A group of older Japanese folks are asking for permission to clean up the contaminated nuclear power station in Fukushima.

More than 200 retirees are volunteering to take the place of young people who are exposing themselves to high levels of radiation. The group figures they have less than 20 years to live and will be dead before any radiation induced cancer develops. It’s a different story for the young people who have battled in this war zone for three months and are at great risk for developing cancer as they grow older.

A website dedicated to the effort (archived here) further explained the pensioners’ motivations for volunteering to clean up the plant; chief among them was that they felt responsible for the use of nuclear power:

The Skilled Veterans Corps is a group of several hundred Japanese pensioners who are retired engineers and specialists. They have volunteered to undertake the dangerous and difficult task of cleaning up the nuclear power plant, in order to prevent the younger workers from developing cancers later in their lives. The members of the Skilled Veterans Corps say that they no longer want to be a bystander in this crisis as they feel responsible for having encouraged nuclear power in their generation. They argue that it is not ‘brave, but logical’ for the elderly to clean up the Fukushima plant, because they will have a lower chance of dying from cancer.

As of July 2012, Yamada’s group of altruistic pensioners in Japan were “still pushing” for permission to carry out the cleanup at Fukushima:

While officials are likely to remain sceptical, Mr Yamada holds out hope that his senior citizen comrades can still play a role on the radiation front line. He says the Corps will take part in decontamination work outside the nuclear plant.

For Mr Yamada, letting retirees take the lead on such work is common sense.

“There are many elderly people who find it hard to cope with all the free time they have,” he says. “Most people would be pleased to have a chance to do something useful.”

Given that the group organized in 2011 and Yamada was 72 at the time, he was not considered a baby boomer by standards applied in the US or Japan. As of that year, the oldest of that generation were around 64 or 65.

The overall point presented by the image was editorial in nature, positing that the baby boomer generation in Japan was more selfless and supportive than its counterparts in the United States. But generation years in both countries were measured separately, and “boomer” aged populations in each nation were born into vastly different circumstances. The headline of the referenced article existed, but it looked as if creative license was taken to splice a Gizmodo headline into a BBC tweet — perhaps to advance the argument being made. It is true that pensioners fought for permission to clean up a nuclear facility in Japan in 2011, but most of the other elements in the image were lacking context, were opinion-based, or both.