Students in Japan are not asked to take exams before the fourth grade in order to emphasize student character rather than knowledge.

Some social media users and blogs looking to criticize the American educational system have seized on citing its Japanese counterpart as an aspirational example. But at least one widely-circulated example hinges on a lack of context.

The claim has been spread on both websites and memes with some variation of this statement:

In Japanese schools, the students don’t get any exams until they reach the 4th grade. Why? Because the goal for the first 2 years of school is not to judge the child’s knowledge or learning, but to establish good manners and develop character. The Japanese scholars teach manners before knowledge. Should this be implemented worldwide? 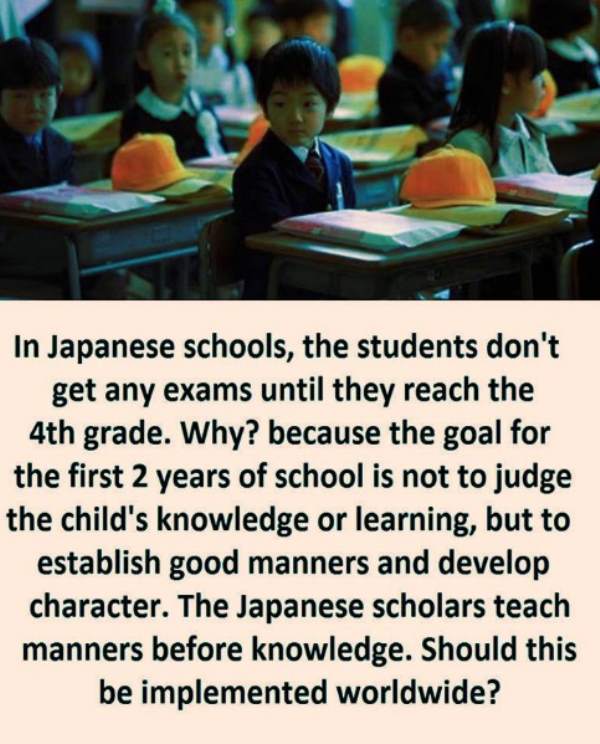 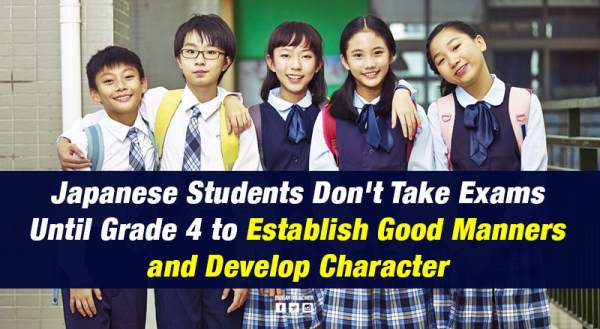 Nathan Driskell, the assistant director of policy and research for the National Center on Education and the Economy, told us that the claim is only true in regards to national standardized tests like the United States’ SAT; Japanese students do take that type of test in the sixth grade. But, he added:

Teacher-developed assessment (which could take any number of forms) is fairly continuous, and an assessment of kindergarten students’ readiness to enter school is required in statute.

Students in grades 1 and 2 do learn Japanese language, mathematics, music and art. They don’t begin social studies or sciences until grade 3, but I still think it’s a bit misleading to claim that there’s no knowledge imparted in the first two years.

In 2009, the researchers behind a landmark 1980s book and film Preschool in Three Cultures took another look at the countries — China, the United States, and Japan — that it had examined 24 years previously. The update, which was called (appropriately enough) Preschool in Three Cultures Revisited, updated the cultural changes since they had first conducted the ethnographies nearly a generation before, offering more insight into the historic and cultural pressures that motivate key differences:

Unlike the 1985 study, when China heavily emphasized control and discipline through didactic pedagogy, this time readers listen in on conversations among Chinese preschool teachers, early childhood center directors, and researchers that emphasize child-centered, progressive approaches promoting the rights of the child, independence, and creativity while sustaining Confucian and socialist values. Though China and Japan similarly share social and emotional concerns regarding their rising singletons, the authors offer different explanations for this seemingly consistent phenomenon. Despite some demographic and economic shifts, the authors find that preschools in Japan have not changed much in practice, though many Japanese preschools have become eldercare centers in an era of shrinking birthrates. Although readers might stereotypically anticipate a regimented and highly structured training of young children in Japanese preschools, they instead encounter children resolving peer conflicts among themselves under a careful observation and nonintervention approach. Conversely, the book portrays American classroom teachers directly intervening to guide social interactions in what Asian observers likened to marriage counseling sessions.

Distinct from preschools in China and the United States that prioritize cognitive stimulation and academic preparation, Japan urgently emphasizes the “education of the heart” in their growing societal concern over social isolation.