A clever "hack" for making popcorn in a muffin tin is beloved by children, and it works perfectly.

A February 12 2021 “muffin tin popcorn hack” shared to Facebook Watch by the page “Paul Vu” went viral almost instantly; it purported to demonstrate how to produce the colorful (and clearly mass-produced) varieties of flavored popcorn seen in the thumbnail below:

There were several indicators the video was fabricated, but a blurb (possibly edited in later and visible in the embedded version above) under the primary post explained that the video was not real:

Thanks so much for watching this video! I do hope you enjoy it. Please note that this page features scripted dramas, parody and satire. The events that take place in this particular short-film video are for entertainment purposes only.

Despite this, the several shares per minute it accrued were posted alongside comments like:

Viewers commenting about their interest in attempting to make the muffin tin popcorn shown in the video might not have seen the message. When we clicked on the page’s “Videos” tab, the clip was highlighted as “Most Popular.” But it looked like this: 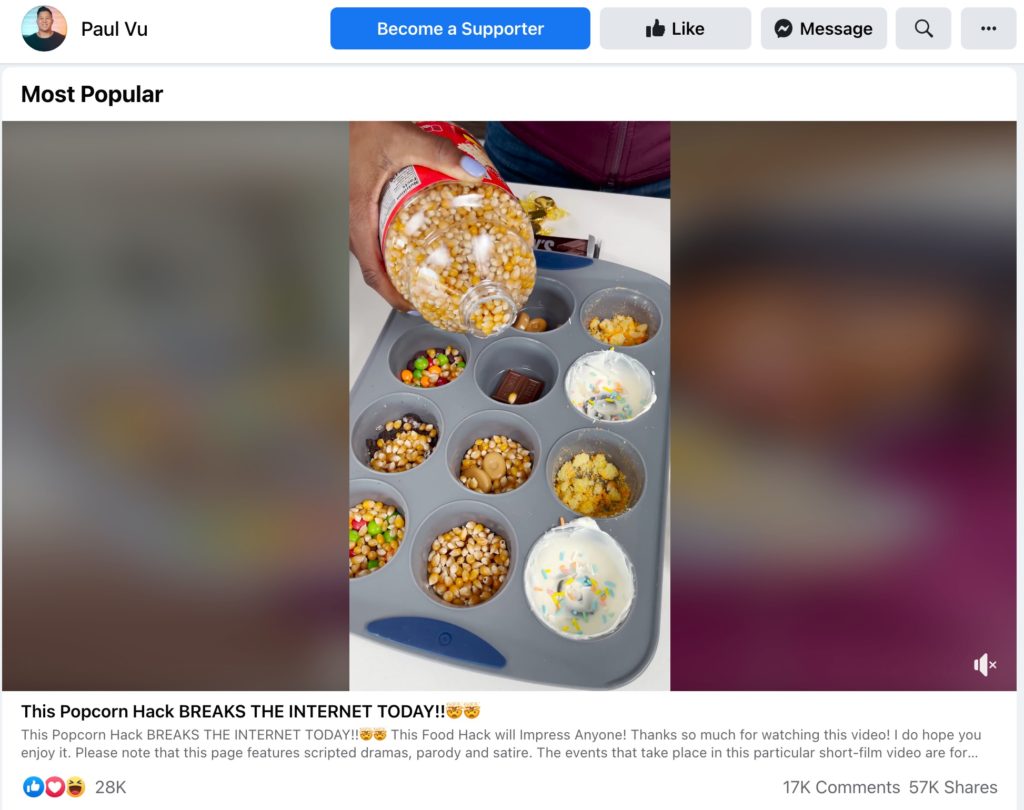 The most important part of the “warning” — the portion reading “events that take place in this particular short-film video are for entertainment purposes only” — was not fully visible. Facebook content appeared in a variety of forms across devices and platforms, with mobile phones serving as a primary platform for viewing such content.

When we opened the page on our phone, the “muffin tin popcorn hack” was even more misleading and dangerous (with more than 1,400 concurrent viewers to boot): 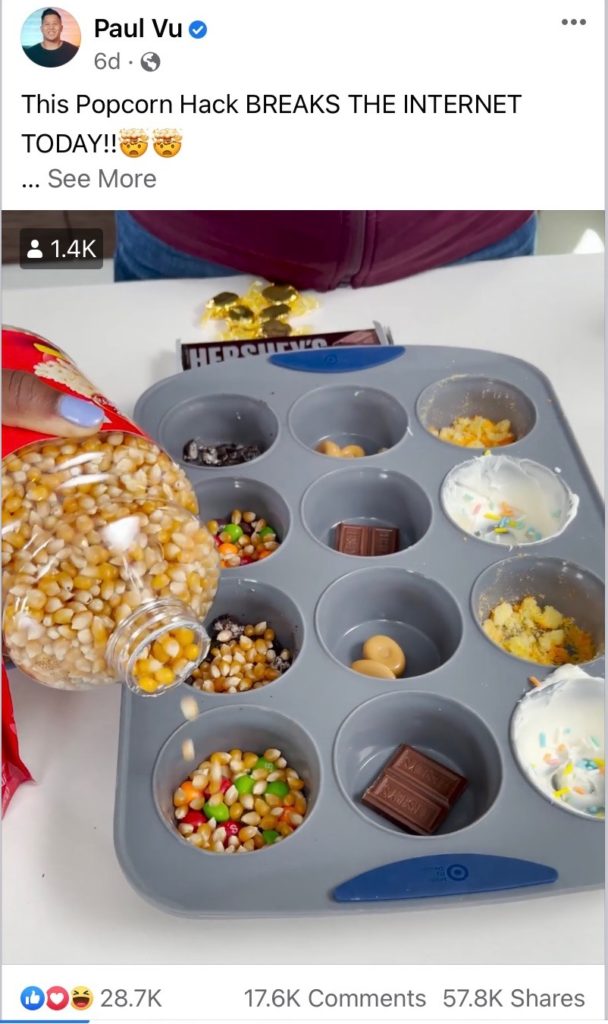 As for how it was clearly fake, the primary “tell” was that Paul Vu’s page directly stated the video was fake. Moreover:

Motivation for producing hoax cooking videos was clear, as so-called “hand in pan” videos attract billions of views. According to Google Trends for the seven day period ending February 19 2021, the search terms “muffin tin,” “popcorn in muffin tin hack,” and “popcorn hacks” were “Breakout” searches — indication Facebook users were seeking out additional information on what looked from several angles to be a sincerely-presented recipe.

A similar hoax about coloring hair with crayons was virally popular and also heavily promoted by Facebook Watch at around the same time:

‘The Crayons DYED Her Hair’

At Best the Video Will Waste Money; at Worst, It Could Cause Injuries

The woman in the video emphasized how much her children loved the “birthday cake” version of muffin tin popcorn. Unlucky people attempting the false “hack” would need to purchase:

Popcorn is fairly inexpensive at $1-2 a bag, but the entire “recipe” would likely cost $20 or so in supplies before any of the dangerous “steps” were even considered, in addition to causing disappointment, a mess, and possible injuries.

Hoax “Hacks” Cause Real-Life Harm, and Children Are at Particular Risk

Disinformation is everywhere — even in our recipes. Food scientist Ann Reardon’s popular “How to Cook That” channel is one small island of content in a sea of clickbait and engagement baiting hoaxes.

Reardon frequently debunks viral “hacks” from sources like “5 Minute Crafts” and “So Yummy” on her channel; in a description for the December 2020 video “Debunking Fake Cooking Videos 2020,” Reardon explained:

Each [hoax recipe] has an element of truth and but is simplified or missing steps to the point that it no longer works. So why do they fake it? The youtube algorithm loves these quick fast forward to music no talking videos. They seem to be creating for the algorithm only (money) with no concern for the real people watching.

In an October 2019 post (“Fake & Dangerous how-to videos who is to blame if someone gets hurt?”), Reardon addressed a very dangerous “food hack” involving spinning melted caramel and noted that at least one young teenager had died attempting to replicate a “popcorn hack.”

In September 2019, BBC reported on the death of a 14-year-old girl who tried to replicate a video’s instructions for making popcorn:

The accident took place on 22 August [2019] when the girls decided to imitate a video by Ms Yeah in which she makes popcorn in a tin can.

In the original video, which has now been taken down, Ms Yeah can be seen putting popcorn kernels in a tin can. She then ignites a small flame using an instrument resembling an alcohol burner.

The girls had reportedly been heating up alcohol directly inside the tin cans when it exploded. Both of them were severely burnt.

According to the Beijing News, Zhezhe suffered burns on 96% of her body. She died on 5 September [2019].

Xiaoyu was rushed to the hospital and pictures of her widely circulated on social media site Weibo show severe burns to her face and arms. The BBC was not able to independently verify the pictures.

In a February 2020 post, Reardon provided four reasons why she goes to lengths to disprove recipe hoaxes:

One is the absolute waste of food, people who try these doomed recipes will inevitably have to throw out the end result. The second is that many younger viewers had believed that they were the cause of the failure. They assumed that what they had seen on the videos was true, therefore they themselves must be terrible cooks as they can not even pull of something so simple. The third reason is the danger in some of the methods shown – we discussed that in a previous video. And finally it communicates that lying is totally fine if you are making money out of it.

In February 2021, despite receiving years of justified criticism for pushing weaponized disinformation and propaganda globally and subsequently vowing to change, Facebook continued promoting — and concealing the nature of — dangerous hoax videos posing as “entertainment” on the platform, including a “muffin tin popcorn hack” involving a large number of supplies and steps like putting a muffin tin in the microwave. Many of those commenting and sharing expressed excitement at attempting the expensive, doomed, and dangerous hoax recipe; a tacked-on disclaimer was barely or not visible at all in two of the three viewing methods (on the “Videos” tab and on mobile) we used. The video is an obvious hoax, but watchers were led by the people in the video to believe that the “hack” was useful, fun, and beloved by their children.