Baby carrots are created by using old and ugly carrots which are then bathed in chlorine to make them look brighter.

Baby carrots do not come out of the ground the way they appear in bags at the supermarket. Because of this, rumors abound at how they are truly made and what it entails, sometimes in meme form: 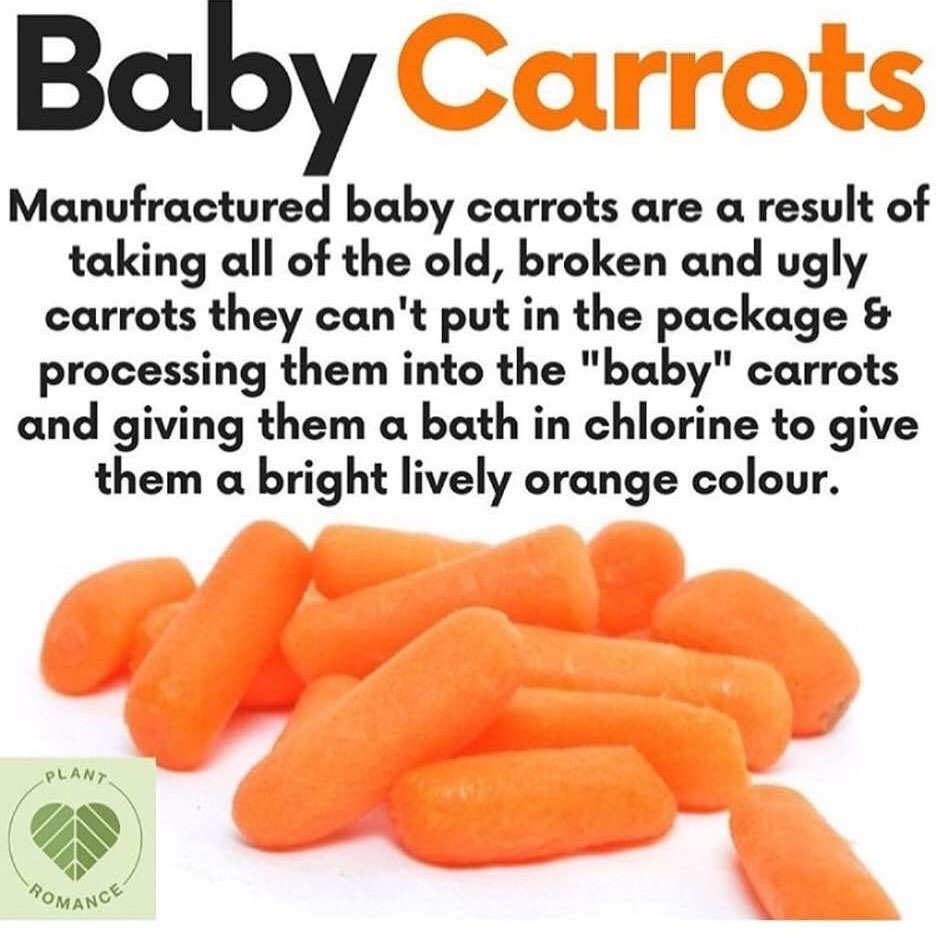 For years, California has produced the majority of carrots sold in the United States; the process of growing and harvesting them has produced many carrots that are perfectly edible, but “ugly.”

After growing tired of discarding imperfect carrots at his Bakersfield packaging plant, a Kern County farmer named Mike Yurosek came up with a solution of whittling down castoffs into what he called “baby carrots.”

Yurosek developed the baby carrot almost by accident. Among the largest carrot farmers in California – and probably the world – his packing operation produced 400 tons of daily cull, damaged and misshapen carrots that wouldn’t fit into bags.

Some of the cull was used for carrot juice concentrate and some for animal feed, but demand was limited. You can feed cows and pigs just so many carrots, Yurosek told USA Today last year. “After that, their fat turns orange.”

Experimenting with an industrial potato peeler and green bean slicer, Yurosek produced the first versions of today’s baby carrot in 1986. The first ones were a bit ragged, but he bagged them and sent them to Vons, a large West Coast supermarket chain. “I said, ‘I’m sending you some carrots to see what you think,'” Yurosek told USA Today. “Next day they called and said, ‘We only want those.'”

Yurosek died in 2005, but his brainchild lives on.

Baby-cut carrots are washed in water with a small amount of chlorine prior to packaging. According to the Food and Drug Administration, the organization that regulates the treatment of “ready to eat” cut vegetables, all products must be rinsed in potable water prior to bagging and shipping, and the amount of chlorine in the water used for cleaning food products is so minuscule that it presents no health risk.