Picture of a Surgeon Holding Hands With a 21-week Old Fetus-Truth! & Disputed!

A picture is being circulated that says it is from surgery on a 21-week-old fetus…and the fetus is holding a doctor’s hand.

The surgery cited in this story did take place, but the accounts of what actually happened are hotly disputed. 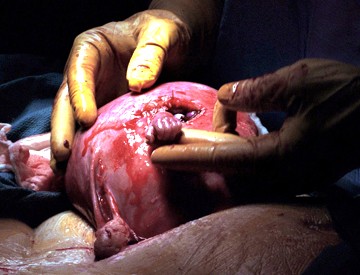 Dr. Joseph Bruner at Vanderbilt is known for his work in fetal surgery, especially on babies with spina bifida, a condition in which the spine does not close properly during development.

Vanderbilt confirms that little Samuel Armus was 21 weeks-old in the womb when this surgery took place in 1999, which made the surgery very risky because if anything went wrong, the baby wouldn’t survive on its own.  Dr. Bruner and his colleagues, however, had done numerous successful spina bifida surgeries on fetuses that are not yet viable.

In this particular surgery, photographer Michael Clancy was in the operating room to document surgery on such a young fetus.

Clancy said that “out of the corner of my eye I saw the uterus shake, but no one’s hands were near it. It was shaking from within. Suddenly, an entire arm thrust out of the opening, then pulled back until just a little hand was showing. The doctor reached over and lifted the hand, which reacted and squeezed the doctor’s finger. As if testing for strength, the doctor shook the tiny fist.”

The picture became a sensation as a forwarded email especially among opponents of abortion.  The surgeon, Dr. Bruner, told USA Today in 2000 that the picture was being treated like an urban legend and that he’d even received a report that a team of medical experts had called it a hoax.  Bruner confirmed that the surgery and the photo were real but said that it was “not true” that the baby reached out of the womb and grabbed his hand, as some of the forwarded emails alleged.  “Samuel and his mother, Julie, were under anesthesia and could not move,” he said.  “The baby did not reach out. The baby was anesthetized. The baby was not aware of what was going on.”

Michael Clancy, who owns the copyright to the photo, was stunned by Bruner’s comments and maintains that they do not fit what he saw happen during the surgery and when he took his pictures.   On his website at www.michaelclancy.com, Clancy said he knows what he saw and also quoted a nurse at Vanderbilt who told him that she’d seen babies do that “all the time.”

The surgery was successful and little Samuel Armas was born on December 2, 1999.