Ben Shapiro tweeted "notably, no one said crime" in response to a tweet asking people what they'd like to "ban."

On February 3 2022, an Imgur user shared a screenshot of a purported tweet by right-wing pundit Ben Shapiro, in which Shapiro chastised commenters on a thread about things that should be “banned” and the absence of “crime” on the list: 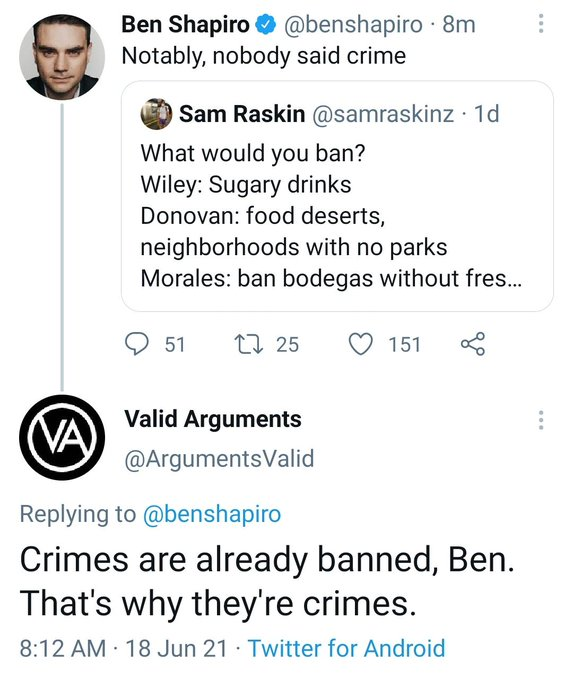 In this screenshot, Shapiro’s tweet and a response to it were visible. Shapiro himself retweeted another user, and in order, they read:

On Imgur, the top comment on the thread read:

This has strong “just one small problem, sell their houses to who, Ben? Fucking Aquaman??” vibes. That dude is a publicly-owned capitalist.

That comment referenced a widely circulated snippet of a May 2019 video essay by YouTube user hbomberguy, which appeared at around 3:30.

When I think of Ben Shapiro, I think of @Hbomberguy’s perfect, succinct vid. pic.twitter.com/vk5ZHMOGI3

In this case, the tweet was real and live as of February 3 2022. Shapiro retweeted the “what would you ban?” tweet on June 18 2021, along with the “Notably, no one said crime” commentary:

At the time Shapiro tweeted about banning crime, the volume of replies led news outlets to report on the tweet and ensuing discourse:

Historian Kevin Kruse tweeted: “I was pretty positive this ridiculous tweet had to be a photoshopped spoof, but no, it’s there on his timeline. Thank you, Ben Shapiro, for being brave enough to demand we finally start banning crimes.”

Professor of media studies and urban education at Temple University, Marc Lamont Hill, asked: “Because crime, by definition, is already banned. You know this, right?”

Another reply to Shapiro’s tweet sought it out because it looked too preposterous to be real:

“I came here because I saw a screenshot of this tweet and thought it was fake but holy s**t you actually tweeted this,” another account holder responded.

A February 3 2022 Imgur screenshot with no link contained a screengrab of a Ben Shapiro tweet in which he scolded users in a discussion on what they would “ban,” observing that “Notably, no one said crime.” At the time, Shapiro’s response generated significant engagement — with many of the replies reminding Shapiro crime was by definition banned, and others visiting the tweet to verify that it was not a fake screenshot created as a joke.