A firefighter found a Bible open to the Gospel of Matthew fused to  a piece of steel  in 2002 at ground zero of the 9/11 terrorist attacks.

Besides chronicling the devastation of the 9/11 attacks against the U.S. photographer Joel Meyerowitz became part of one of the stories that followed.

Meyerowitz was the only photographer allowed to work at the site of the World Trade Center WTC between September 23 2001 and June 2002, and reportedly took more than 8,000 photographs of the site, popularly known as “Ground Zero.” That work later became the basis of Aftermath, a visual archive of the scene and the work done to clean the area.

In March 2002, a firefighter working near the site reportedly found pages from a copy of the Bible fused to a piece of wreckage from the building, and gave it to Meyerowitz. The photographer told the New York Times in 2015:

This shredded, burned and rubble-covered Bible came to me from the loving hands of a fireman who knew that I was the record keeper of ground zero. My astonishment at seeing the page that the Bible was open to made me realize that the Bible’s message survives throughout time, and in every era we interpret its teachings freshly, as the occasion demands.

In this case, Meyerowitz himself became the subject in photos alongside the fragment: 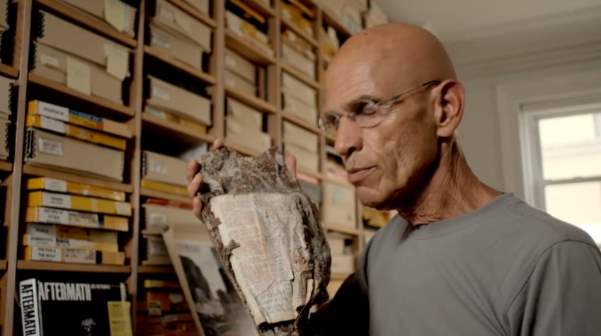 The page most visibly exposed on the wreckage was reportedly turned to part of Jesus’ Sermon on the Mount from the Gospel of Matthew, a passage Meyerowitz said gave him chills:

You have heard that it was said, “Eye for eye, and tooth for tooth.” But I tell you, do not resist an evil person. If anyone slaps you on the right cheek, turn to them the other cheek also. And if anyone wants to sue you and take your shirt, hand over your coat as well. If anyone forces you to go one mile, go with them two miles. Give to the one who asks you, and do not turn away from the one who wants to borrow from you.

Meyerowitz held onto the Bible fragment until 2010, when he turned it over to the National September 11 Memorial Museum where it was put on display with additional religious artifacts collected from “Ground Zero.”

“Since I spent nine months inside the site, I met and have become friends with an amazing range of people who I never would have met before,” he told the New Yorker for a story commemorating the 10th anniversary of the attack. “Detectives, firemen, engineers, architects, workers, and foremen on the site. And, yes, my life and my work have been changed in ways I could not have imagined before.”