A September 2021 headline, "Biden And Harris Served With Impeachment Charge," is accurate.

On September 2 2021,  a story with the shocking headline “Biden And Harris Served With Impeachment Charge – Gun-Toting Boebert Accuses Them Both Of Dereliction Of Duty” popped up as post that quickly went viral. 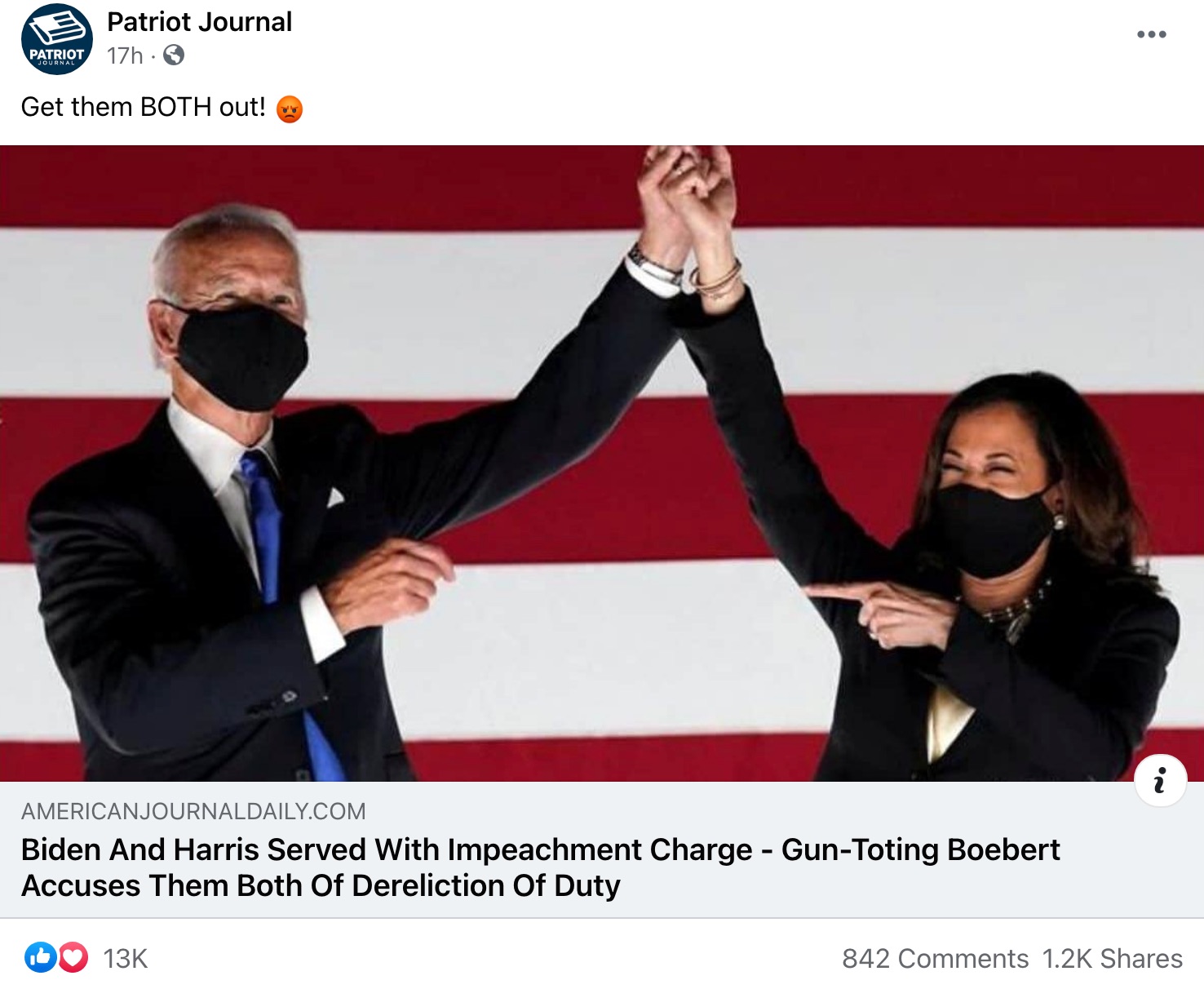 As presented in share format, Facebook users were exposed only to the claims in the headline, which suggested that United States President Joe Biden and U.S. Vice-President Kamala Harris were “served” with an “impeachment charge,” language clearly used to imply that Biden and Harris were formally or criminally “charged.”

Incidentally, the headline and content appeared in two separate places, with two different authors credited. AmericanJournalDaily.com’s version was credited to “Daniel Ottomire,” while ThePatriotJournal.com credited “Patrick Casalino” — yet another red flag that these are nothing but low-effort disinformation sites.

Of the hundreds of people who shared the post, few likely clicked through and read the actual content of the page. Text directly following the headline in no way referenced an ongoing or imminent effort to impeach Biden or Harris; presumably an event as serious as an impeachment “charge” would immediately follow, but it did not.

The item’s first three paragraphs were incredibly vague, almost as if they were designed to bore readers sufficiently and obfuscate an absence of credible detail:

In the aftermath of the fall of Afghanistan, it’s up to Congress to get answers.

Many Republicans have called out Biden for his total failure. Even a few Democrats have expressed displeasure (especially those who have constituents trapped overseas).

But how many lawmakers are actually taking a stand against this corrupt, pathetic administration?

Subsequently, the site referenced Rep. Lauren Boebert (described admiringly as “making waves” since her election, making it clear this is not a site overly concerned with credibility), continuing with what was presumably the titular content. Unsurprisingly, “charge” was used misleadingly — the piece quoted (but didn’t seem to link to) the right-wing Independent Journal Review, suggesting Boebert was “calling for” Biden and Harris’ “impeachment”:

“The blame starts at the top with Biden and his hand-picked vice president, who bragged that she was right there making the same bad decisions.”

“And if not for her own dereliction of duty, she should be impeached for not demanding we invoke the 25th Amendment,” she argued.

After that, the site added:

Rep. Boebert held a press conference this week [in late August or early September 2021], calling for the impeachment of Joe Biden over Afghanistan. But she went even further than that. She called out Kamala Harris, saying her “dereliction of duty” is grounds for her own impeachment.

Consistently, phrasing heavily implied — but did not outright conclude — that the severity of Biden and Harris’ “impeachment charge” was limited to Boebert’s verbal statements. (It was.) In the example above, Boebert called for Biden’s impeachment, but “went further” — not insofar as taking any action, but in including Harris in her “calling.”

If either iteration (the one credited to Ottomire or Casalino) linked to the IJR content they cited, we couldn’t locate the link. We found an article on IJR.com featuring the Boebert quote, from August 31 2021 (“Rep. Boebert Declares It Is Time To Impeach Biden, Harris Over Afghanistan.”)

IJR.com’s reporting was clear regarding the “impeachment charge” against Biden and Harris:

During a press conference on Tuesday [August 31 2021], Boebert said, “The blame starts at the top with Biden and his hand-picked vice president, who bragged that she was right there making the same bad decisions.”

“And if not for her own dereliction of duty, she should be impeached for not demanding we invoke the 25th Amendment,” she argued.

A Facebook post of a twice-published item titled “Biden And Harris Served With Impeachment Charge – Gun-Toting Boebert Accuses Them Both Of Dereliction Of Duty,” clearly favored by the platform’s algorithms, featured an extremely misleading article overstating the underlying content from two separate disinformation sites.

On August 31 2021, IJR accurately reported that Boebert said during a press conference that Biden and Harris ought to be impeached “over the chaotic withdrawal from Afghanistan” in August 2021. However, that was all that happened: Boebert got up and said something during a press conference. She made no plans and passed no laws. Despite this, derivative content from the two other sites intentionally misled readers by describing Boebert’s assertions as a “charge” (implying formality, whether criminal or procedural) when in actuality, the headline was about something Boebert simply stated; “served” was similarly added to lend credibility to the story which otherwise did not exist.