On September 1 2021, a Newsweek article bearing the leading headline, “Comedy Central Caves to Cancel Culture, Removes Episode from ‘The Office’ Line-up” was identified as virally popular by Trendolizer; it covered the show’s second episode, “Diversity Day.”

The piece (which was for some reason marked as “news” rather than “opinion”) was authored by Carly Mayberry, and the headline made it sound as though there was some sort of unequivocal, identifiable decision by Comedy Central precipitated by “woke” pressure to “cancel” the well-liked sitcom’s “Diversity Day” episode. For context, The Office‘s series finale aired in May 2013, and Comedy Central had no part in “canceling” the show.

Mayberry claimed The Office was one of many “casualties of cancel culture.” But the piece’s second paragraph simply described an episode absent from one single “marathon” airing:

NBC’s long-running show The Office is the latest comedy series to join the list of those to become casualties of cancel culture.

That’s as viewers familiar with one of America’s favorite mockumentaries watching a recent Sunday marathon on Comedy Central [in August 2021] noticed that the show’s “Diversity Day” episode was omitted from the rotation … The segment, which was the second in the series’ first season that originally aired on March 29, 2005, is just the latest example of content censored in an increasingly woke era with corporations and big tech companies now deciding what audiences can and cannot see.

From there, Mayberry cited unrelated episodes of shows other than The Office which (for some reason or another) had episodes omitted from streaming platforms or chronological airings of those programs. Six paragraphs later, she explained that Comedy Central did not address “Diversity Day” being absent from the August 2021 lineup, and her sources to support the “woke mobs” claim consisted solely of “angry tweets”:

While Newsweek reached out to multiple spokespeople at Comedy Central and ViacomCBS about its recent omission of The Office episode, no one responded to our query as to why it was removed. Newsweek also reached out to comedian Larry Wilmore, who was the central guest star in the segment, but he declined to comment.

Meanwhile, Twitter was aghast last week with comments from disappointed fans regarding the “Diversity Day” deletion.

One day after Newsweek‘s “Comedy Central Caves to Cancel Culture” piece, Distractify and WeGotThisCovered reiterated the claims. Neither site mentioned Newsweek, and neither site supported their claims in any other fashion than stating it was absent from the “marathon.”

Distractify ratcheted up the clickbait and outrage-bait with the following headline:

Digging back just slightly farther showed that before the Newsweek item, a site called “Outkick” reported that Comedy Central neglected to air “Diversity Day.” In order to view the article, we had to click through a prompt complaining of “mainstream bias”: 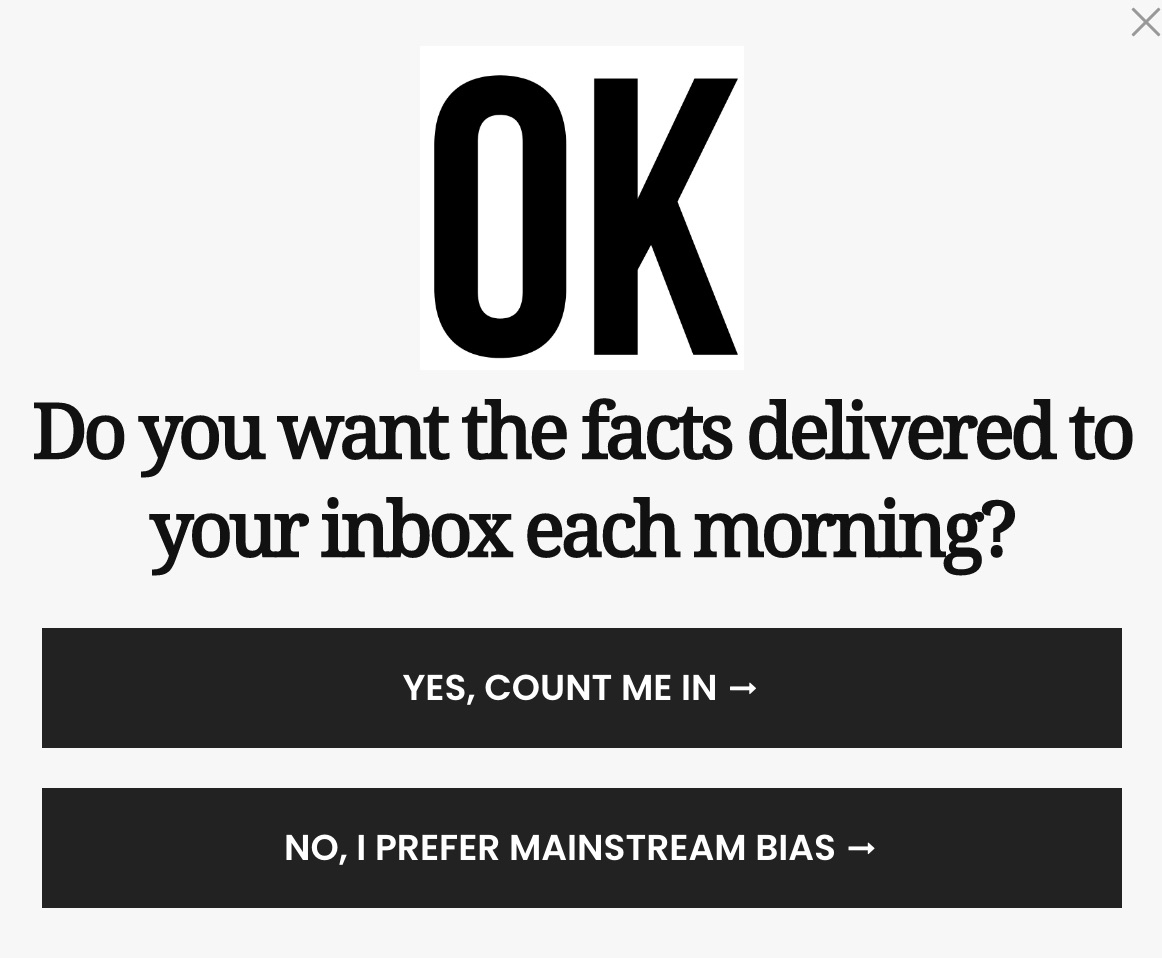 Outkick’s final paragraph was an interesting coda to the claims that the woke mobs of cancel culture had gotten rid of “Diversity Day”:

What’s more, no one had even complained about the episode. This was Comedy Central preemptively catering to a low-level blue check who could label its the brand racist. The entertainment industry is desperately seeking to satisfy a group they will ultimately never appease.

So the claim now appeared to be that no cancel culture mobs were in fact involved, but that someone suspected that Comedy Central might have been possibly “preemptively catering” to imaginary “woke mobs,” or at least unidentified people who someday might want the episode not to air. Outkick’s “source” was slightly similar to Newsweek‘s, with one extra detail — mention of the “cancel culture”-obsessed, hyperpartisan, low-credibility site Daily Wire.

The Daily Wire was also direct about the source of the claim. If Mayberry was inspired by the earlier piece, she didn’t credit it — and either she or an editor stripped away any evidence of speculation:

According to Barstool Sports, [Comedy Central] has “quietly omitted [the episode] from the rotation.”

Barstool sportswriter and host of the podcast “Spittin’ Chiclets,” Rear Admiral, noticed the second episode of season one was missing from a recent marathon of the show. He asked Comedy Central about its absence and said he received no reply, not even the “standard corporate boilerplate reply about potentially offending people.”

The Daily Wire reached out to Comedy Central to confirm Barstool’s claim but did not receive a timely response.

Per both Outkick and Daily Wire, Comedy Central’s lack of response was substituted with an imagined “corporate boilerplate reply about potentially offending people.” Even though no such response was provided, its absence was deemed proof positive Comedy Central was “caving” to completely imaginary pressure from “cancel culture” advocates.

The similarly questionable right-wing blog the Daily Caller covered the rumors about Comedy Central “canceling” the “Diversity Day” episode; unlike Newsweek, the Daily Caller (another openly partisan, low-credibility site) used the term “report” in their headline and marked the item as “opinion”:

Comedy Central reportedly dropped a famous episode of “The Office” from a recent marathon.

According to Barstool Sports, the popular channel omitted the famous “Diversity Day” episode from the marathon …

The balance of the article was, as indicated, an opinion piece about “cancel culture.” In the few days between Daily Wire and Daily Caller’s coverage and the Newsweek piece, qualifiers like “report” were dropped — possibly creating a more virally popular (but still shaky) assertion.

Predictably, the inauthentic trajectory of the claim included turning it into a report or rumor on partisan sites laundered into “news” thanks to Newsweek, followed by the usual full-throated declarations that The Office be preserved and not censored:

It’s true that “Diversity Day,” which originally aired on March 29, 2005, includes a lot of stereotypes and other cringey, insensitive material. But as anyone who has actually seen the episode can tell you, the whole point is to poke fun at those stereotypes and offensive behavior and the way corporate America clumsily tries to tackle them without taking a hard look at their own biases. In the episode, Michael Scott (Steve Carell) forces the employees at Dunder Mifflin to attend a diversity seminar. And while his intentions are good — sort of — he winds up playing into all the ugly stereotypes he’s trying to combat, reciting a snippet of a Chris Rock stand-up routine that no white person should feel comfortable reciting and doing an exaggerated Indian accent at one point that prompts Kelly Kapoor (Mindy Kaling) to slap him and walk out.

That particular excerpt mentioned a possible reason Comedy Central might have “omitted” the “Diversity Day” episode from its chronological airings of The Office. It contained excerpts of a stand-up routine by Chris Rock.

It seemed equally plausible that the rights to that routine created a conflict with which streaming subscribers were familiar in passing. Licensed content in myriad forms often was replaced or omitted, as was the case with syndication of the 90s show Beavis and Butthead.

In 2018, Beavis and Butthead creator Mike Judge tweeted to answer the common question; commenters described other syndicated shows affected by the advent of streaming and licensing conflicts:

The same thing happened with the DVD release of The Wonder Years. All of the acoustic guitar music in the background and credits had to be edited out because the musician who played it wouldn’t give permission for his music to be released.

That said, we don’t even have a “standard boilerplate response” to suggest streaming or licensing rights conflicts caused an issue with The Office and “Diversity Day.” Expanding search queries earlier than August 2021 provided an additional piece of context that was relevant to the claim that a Barstool Sports writer blew the lid off Comedy Central’s “preemptive” concessions to cancel culture that particular month.

Users in 2020 similarly inferred that “cancel culture” was the reason “Gay Witch Hunt” was “missing” from episodes airing “in order.” But another comment from July 2020 referenced “Diversity Day”:

I noticed yesterday that they skipped Diversity Day.

We called  Comedy Central’s press line seeking further information, but we were unable to find out more.