Biggest Anaconda Snake in the World Captured in Africa-Fiction!

Summary of eRumor:
The world’s biggest Anaconda snake was captured in Africa after it ate people and humans whole.
The Truth:
There have been lots of reports of the world’s biggest anaconda being captured over the years, but don’t believe them.
The biggest anaconda on record measured 28 feet long and 44 inches around. That’s not the biggest snake on record, however. That title belongs to an Asiatic Reticulated Python that grew to be 33 feet long.
The website Before it’s News (falsely) reported in 2010 that a 150-foot snake had been captured after eating a man alive. The website later reported that a new record-breaking snake that measured 195 feet had been captured, which is also false.
The website publishes user-generated content and isn’t a trustworthy source for news.
Claims about the world’s biggest anaconda have been circulating the web ever since. Some claim that the world’s biggest snake measured 100 feet; others claim that it measured 160 feet. Either way, they’re all wrong.
Most of stories about record-breaking anacondas show an areal view of a river with what appears to be a massive snake swimming against the current: 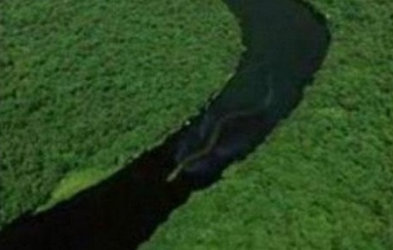 But the photo has clearly been doctored. First, the “serpent” shown swimming would measure much longer than 150 feet. Given its proportion to the trees surrounding it, the serpent would be hundreds of feet long — if it were real.