A polio vaccination campaign headed by the Bill and Melinda Gates Foundation in India led to 47,500 cases of paralysis.

A baseless blog post regurgitated in several fringe blogs relied on the common tactic of painting Bill and Melinda Gates — and vaccination campaigns — as predatory.

One post from 2012 blames the couple for thousands of death in connection to a vaccine:

Polio is a terrible disease that kills many and paralyzes others. Fifty years ago it was widespread around the world. When you talk to people who remember polio in the United States, they’ll tell you about the fear and panic during an outbreak and describe grim hospital wards full of children in iron lungs that maintained their breathing. At its peak in the United States in 1952, polio paralyzed or killed more than 24,000 people.

But in 2011 alone, the Bill and Melinda Gates’ polio vaccine campaign in India caused 47,500 cases of paralysis and death.

It is true that use of the oral polio vaccine (OPV) was discontinued in the U.S. in 2000 due to a risk of paralysis affecting one out of every 2.4 million children. However, polio vaccinations themselves are still administered and supported by the Centers for Disease Control.

But the blog’s central claim blaming the Gates is based on an editorial in the Indian Journal of Medical Ethics that has been refuted. The journal’s editorial board argued that 47,500 cases of non-polio Acute Flaccid Paralysis (AFP) had been reported in the country in 2011, which the journal said was “directly proportional” to the amount of doses of oral polio vaccine (OPV) administered at the time.

“The polio eradication programme epitomises nearly everything that is wrong with donor funded ‘disease specific’ vertical projects, at the cost of investments in community-oriented primary health care (horizontal programmes),” the journal’s editorial board argued.

But according to a study by resarchers from both the Indian Institute of Science and the World Health Organization, a number of factors contributed to the increase in AFP cases. The report cited a broader definition of AFP (which included separate disease like Guillian-Barré syndrome) and an increase in screenings for non-polio viruses that cause AFP, which in turn leads to more of those types of cases being diagnosed.

According to the study:

This large increase in non-polio AFP cases, which represent AFP cases caused by agents other than poliovirus, probably reflects the excellent implementation of the expanded definition of AFP and highly sensitive surveillance and detection methods used by NPSP in India from 2005 onwards, in contrast to the other polio-endemic countries, i.e., Pakistan, Nigeria, and Afghanistan, where the expanded AFP surveillance is not in place. The large increase in the non-polio AFP rate from 1.45 and 1.97 per 100,000 children during 1998–2003 to 16.20 in 2011 further reflects the excellent operational performance of the expanded AFP surveillance in India.

The Bill and Melinda Gates Foundation has said that it contributes technical and financial recourses to the Global Polio Eradication Initiative (GPEI) to support things like targeted vaccination campaigns, community mobilization and stronger routine immunization efforts:

A cornerstone of the GPEI polio eradication strategy is the goal of reaching all children in the first year of life in the highest-risk countries with multiple doses of OPV, through both national and local vaccination campaigns. Efforts include door-to-door immunization in areas where poliovirus is known or suspected to be circulating, as well as in areas at risk of re-importation, with limited access to healthcare, high population density and mobility, poor sanitation, and low routine immunization coverage…

OPV, the polio vaccine used in most of the developing world, is safe, effective, easy to administer, and inexpensive. But OPV consists of live, weakened viruses, which in very rare cases — 1 in every 2.7 million first doses of the vaccine — can cause paralysis. In settings with very low OPV coverage, OPV vaccine viruses can also mutate and begin to circulate in the population, just like wild polioviruses.

Regardless, the claim has lived on through scurrilous blog posts and memes on social media: 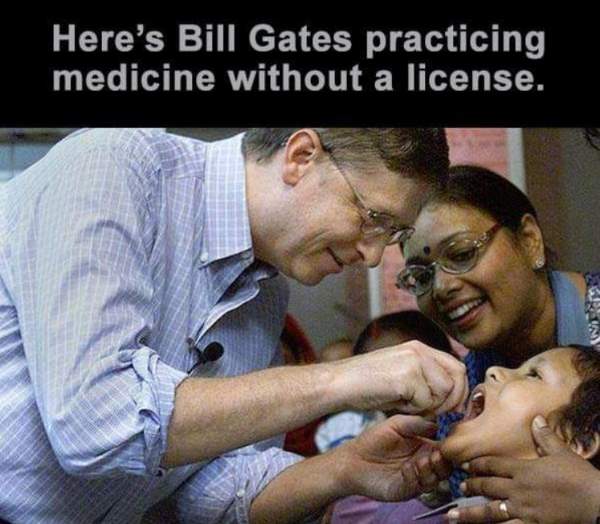