Running Herd of Bison in Yellowstone is an Indication of Volcanic Eruption-Fiction!

A video of a herd of bison running in Yellowstone National Park has gone viral on the Web along with speculation that there may be an eruption of the Yellowstone “super-volcano.”   Many are asking if animals are leaving Yellowstone.
The Truth: 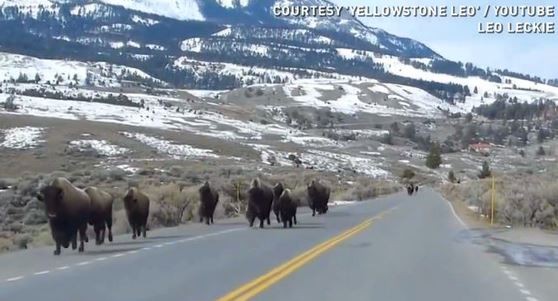 The video of bison running along a road in Yellowstone National Park is real, but according to an April 3, 2014, article by the Los Angeles Times, there is no cause to fear of an eruption of the super volcano.

The article said that the bison were not running away from Yellowstone, but to it.

The video was actually taken by educational partner of Yellowstone National Park Leo Leckie, who told reporters that the “bison were running for the sake of running.”

Leckie said that the trouble began after a series of earthquakes area. “Eruptionists” and conspiracy theorists hijacked his video and re-released it on the Web with a suggestion that it was taken after the earthquakes. Leckie added that “news agency after news agency started picking up on it, without looking at the original video to see what my actual intent was.”