On November 5 2020, social media posts urged Georgia voters to check the status of their ballots, further adding that voters with rejected ballots could “cure” their ballots if they acted quickly – often advising them to call the number (888) 730-5816 for further instructions:

⚠️ ATTENTION: GEORGIA VOTERS! If you voted absentee, please check the status of your ballot NOW!

If it was REJECTED, you have until FRIDAY, November 6 to fix it. Remember — EVERY vote counts!#CountEveryVote 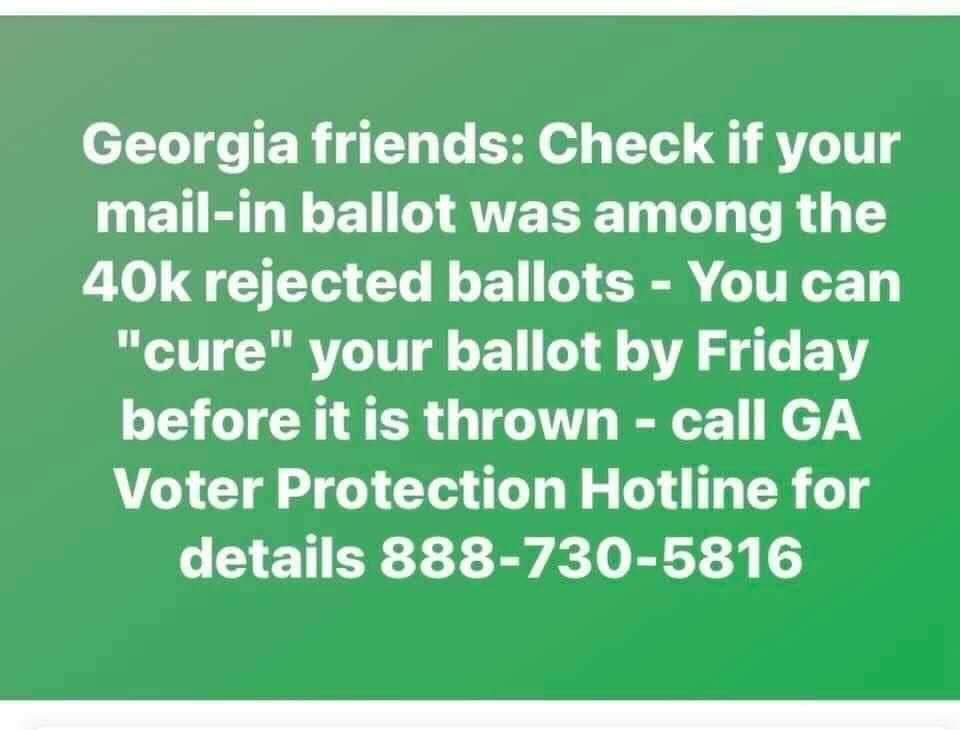 According to PolitiFact, there was a rumor that 40,000 ballots were rejected in DeKalb County, Georgia (not in the entire state); it wasn’t true for DeKalb County, but we also found no specific figure for the number of spoiled ballots in total across the state.

PolitiFact did have an estimate of 3,000 likely spoiled or rejected ballots in Georgia in 2020:

The DeKalb County Board of Registration and Elections has debunked the post. The Georgia Secretary of State’s office has told reporters that it expects 3,000 rejections statewide.

Dispute over the number of rejected ballots led some readers to believe that the ballots were neither rejected nor in need of curing:

I thought I read this morning that this was a false claim?

Georgia voters can check to see if their ballot was rejected. One way, per a Georgia Secretary of State site, was via an opt-in notification service:

The American Civil Liberties Union of Georgia provided instructions for checking ballots after votes were cast, via Georgia’s Secretary of State. The service was only available to registered voters in the state of Georgia.

Do Georgia Voters Have Until November 6 2020 to ‘Cure’ Rejected Ballots?

If your ballot was rejected, your county elections office will contact you with a document to “cure” or correct your ballot envelope. Contact your county registrar to get more information and find out what your options are. One of the most common reasons an absentee ballot is rejected is because it has not been properly signed. Be sure to carefully read and follow all instructions included in your absentee ballot.

However, that page did not specifically reference Friday November 6 2020. A ProPublica.org report on battleground ballots did:

Victoria Benedict, a stationery store owner in Atlanta who has been voting by mail for years, was surprised last month when she went to the Georgia secretary of state’s website and found her ballot had been rejected. A problem with her signature — the state said the one on her ballot did not match what it had on file — set her on a dayslong quest to make sure her vote would be counted.

County staff told her that she would either have to show up at the local election office to sign her ballot or vote in person on Election Day. Either option would risk her health during a pandemic. Instead, on the advice of a friend who volunteers with the state’s Democratic Party, she filled out a form known as a ballot cure affidavit. This time, her vote was accepted.

In Georgia, any voter whose ballot is rejected is notified by the county and then will have until Friday [November 6 2020] to submit a cure form that will allow their signature to be validated. The law requires count officials to reach out to voters by phone or by email, and they must send a letter with instructions if a voter’s contact information is unavailable. Gabriel Sterling, a state official who manages Georgia’s voting equipment, projected on Monday afternoon that the state would reject about 3,000 total ballots.

Social media posts about Georgia ballots being rejected stated that there was a deadline to “cure” or “remediate” those ballots. It is true that it is unlikely that 40,000 ballots would wind up invalid in Georgia; nevertheless, there are still rejected ballots. Georgia voters had the ability to check whether their ballot was rejected, and per ProPublica, had the chance to remediate or cure ballots —  before November 6 2020.