Summary of eRumor:
A Canadian teenager found a lost Mayan city using Google Maps and a new method that matches stars to the location of temples in Central America.
The Truth:
There’s currently no agreement among archaeologists and remote sensing experts as to whether a Canadian teenager actually found a long lost Mayan city using Google Maps, so we’re calling this one “disputed” for the time being.
The story first appeared in Le Journal de Montreal, a French language newspaper based in Quebec, on May 7th under the headline, “A Teenager Discovers a Mayan City.” The story reports:

Passionate Mayan for several years, he analyzed 22 Mayan constellations and realized that if he connected on a map the stars of the constellations, the shape of each corresponded to position 117 Mayan cities. No scientist had ever found such a correlation between the stars and the location of the Mayan cities.

The genius of William, however, was to analyze a 23rd constellation. It contained three stars and only two cities matched on the card. According to his theory, so it should be a 118th Mayan city in a remote and inaccessible location in the Yucatan Peninsula, Mexico.

Analyses from satellites in different space agencies have revealed that there was indeed a pyramid and thirty buildings at the precise location identified by the young man.

The Journal had access to satellite images which we see different structures of what may be an ancient city. “Geometric shapes, such as squares or rectangles, appeared on these images, forms that can hardly be attributed to natural phenomena,” says remote sensing specialist at the University of New Brunswick, Dr. Armand LaRocque.

The sensational story about an untrained teenager supposedly discovering a Mayan city that had eluded professional archaeologists quickly traveled around the world. By May 10th, the story appeared in the U.K.’s Telegraph under the headline, “Star Pupil Finds Lost Mayan City By Studying Ancient Charts of the Night Sky From His Bedroom.” That story reports:

William took to Google Maps and projected that there must be another city hidden deep in the thick jungles of the Yucatan Peninsula in Mexico.

The Canadian Space Agency agreed to train its satellite telescopes on the spot and returned with striking pictures: what appears to be an ancient Mayan pyramid and dozens of smaller structures around it.

If the satellite photographs are verified, the city would be among the largest Mayan population centers ever discovered.

It fell to William Gadoury to christen the new city and he chose the name K’aak Chi, meaning Fire Mouth, and the teenager said he hoped to one day see the ruins with his own eyes.

The tech site Gizmodo picked up the story from there, quoting a remote sensing specialist who said he believed that the satellite images showed man-made geometric shapes hidden beneath the jungle’s canopy:

Taking this idea further, Gadoury contacted the Canadian Space Agency, who provided him with space-based images from NASA and JAXA. These satellite images revealed a batch of undeniably geometric structures hidden under the jungle canopy. Gadoury, along with Dr. Armand LaRocque, a remote sensing specialist from the University of New Brunswick in Fredericton, believe it’s an ancient Maya pyramid surrounded by 30 smaller structures. The teen has named the city—which has yet to be explored and verified—K’aak Chi, which means “Mouth of Fire.” If confirmed, it would be among the largest Maya cities ever discovered.

LaRocque said the use of satellite images, as well as the contribution of digital image processing, helped to confirm the possible existence of this forgotten city. “Geometric shapes, such as squares or rectangles, appeared in these images, forms that can hardly be attributed to natural phenomenon,” LaRocque said.

However, experts have since come forward calling the reports “false.” David Stuart, an anthropologist from the Mesoamerica Center-University of Texas at Austin, said on Facebook that he felt the need to debunk the story after the BBC picked it up. He called it “a terrible example of junk science hitting the internet in free-fall” in the post: 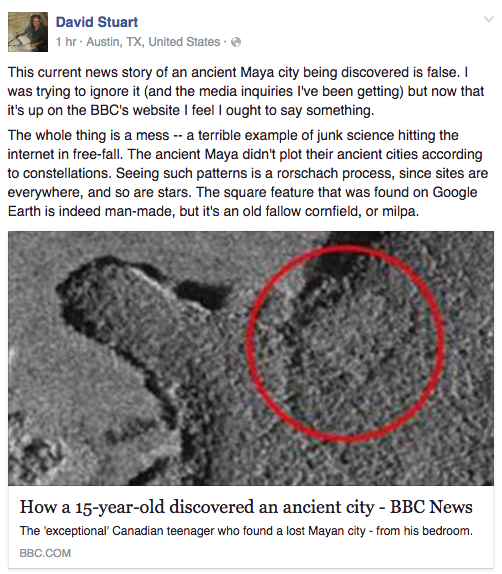 Additionally, Thomas Garrison, an anthropologist and remote sensing specialist at the University of Southern California, said the objects in the satellite images were corn fields — not ancient relics of a Mayan city, Gizmodo reports:

I applaud the young kid’s effort and it’s exciting to see such interest in the ancient Maya and remote sensing technology in such a young person. However, ground-truthing is the key to remote sensing research. You have to be able to confirm what you are identifying in a satellite image or other type of scene. In this case, the rectilinear nature of the feature and the secondary vegetation growing back within it are clear signs of a relic milpa. I’d guess its been fallow for 10-15 years. This is obvious to anyone that has spent any time at all in the Maya lowlands. I hope that this young scholar will consider his pursuits at the university level so that his next discovery (and there are plenty to be made) will be a meaningful one.

So, considering that experts have weighed in on both sides of this story, we’re calling it “disputed” for the time being. We’ll post future updates about the Canadian teen’s findings here.