Summary of eRumor:
Car headrests were designed to break a car window if an emergency escape is needed.
The Truth:
Car headrests can be used to break a car window, but they weren’t intentionally designed for that reason.
Car windows are made with tempered glass, which is very difficult to break. It’s created by rapidly heating and cooling glass in a process that makes the glass five to 10 times stronger than it originally was.
Car windows can, however, be broken by hard objects with pointed tips like the metal punches found on hammers that made specifically to shatter glass windows in the case of emergencies: 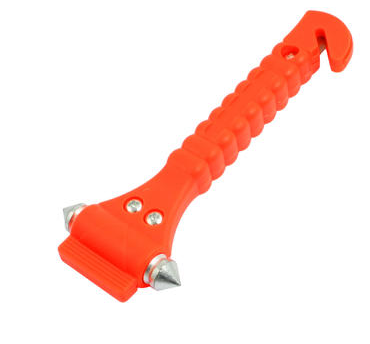 When it comes to using a headrest to break a car window, the same principle applies. But instead of swinging the headrest like a hammer, one of the metal posts is inserted between the window and the door, and when it’s pulled on, pressure placed on the end of the metal post shatters the glass. This YouTube video demonstrates how it’s done.
There’s no truth, however, to claims like this one that car headrests were specifically designed to be removable so that they’re able to smash a car window:

Car headrests are detachable because they can save your life.

So, while it’s true that car headrests can be used to break windows, there’s no indication that they were specifically designed with that purpose in mind. That’s why we’re calling this one truth and fiction.