Image juxtaposes a real headline about a Cannibal Corpse guitarist with a real Spotify screenshot displaying songs "I Have Guns in My House, For Murder" and "My Home is Full of Skulls."

On November 7 2021, a Twitter meme about a Cannibal Corpse guitarist and the band’s purported songs (“I Have Guns in My House, For Murder” and “My Home is Full of Skulls”) received significant engagement:

The top of the meme showed what appeared to be a Facebook share of an article with the headline, “More than 80 firearms and three skulls found in Cannibal Corpse guitarist’s home.” Under that, imagery of Spotify’s artist interface displayed two songs — “I Have Guns in My House, For Murder” and “My Home is Full of Skulls.”

Although the meme was popular, it wasn’t new. A meme aggregator picked it up in June 2020, and it was shared to Reddit’s r/technicallythetruth in December 2018:

I have guns in my house, for murder from technicallythetruth

As for the headline in the meme’s first part, it was a real ConsequenceOfSound.net article published on December 18 2018:

Following [the December 2018] arrest of Cannibal Corpse guitarist Pat O’Brien on assault and burglary charges, a new report reveals that more than 80 firearms were found at the home of the death-metal musician.

A search warrant obtained by the Tampa Bay Times lists the arsenal of weapons as roughly 50 shotguns, 10 semiautomatic rifles (including a couple variants of AK-47s), two Uzi-style rifles, and 20 handguns. However, only one of those firearms, a sawed-off shotgun, was illegal to possess, provided that the other guns had the proper paperwork.

We searched the Spotify app for “I Have Guns in My House, For Murder” and “My Home is Full of Skulls” respectively; both searches pulled up the artist profile for Cannibal Corpse, but no actual songs. Visiting Cannibal Corpse’s “Verified Artist” profile displayed songs with similar in tone titles, but neither of the two songs were among them despite the meme’s popularity: 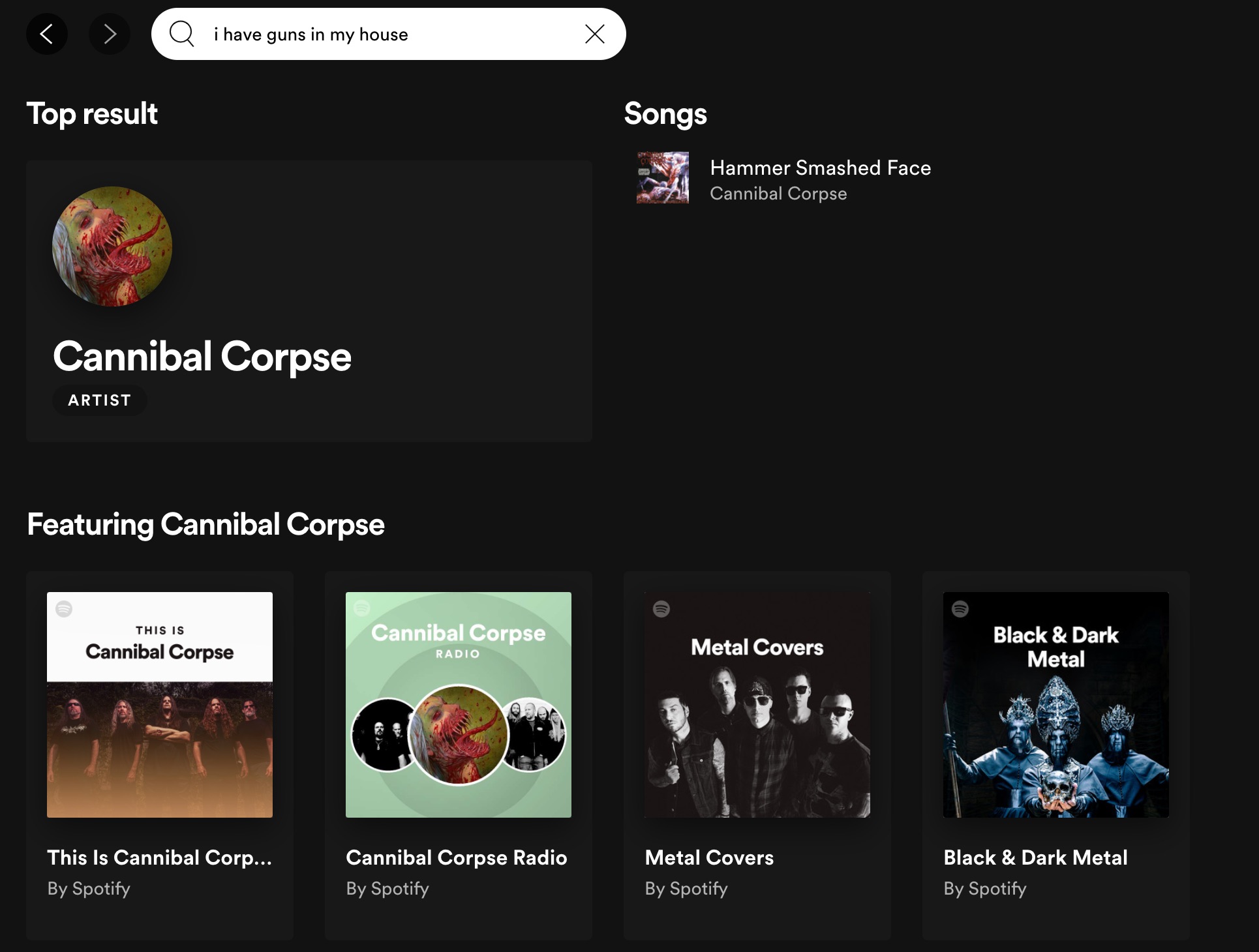 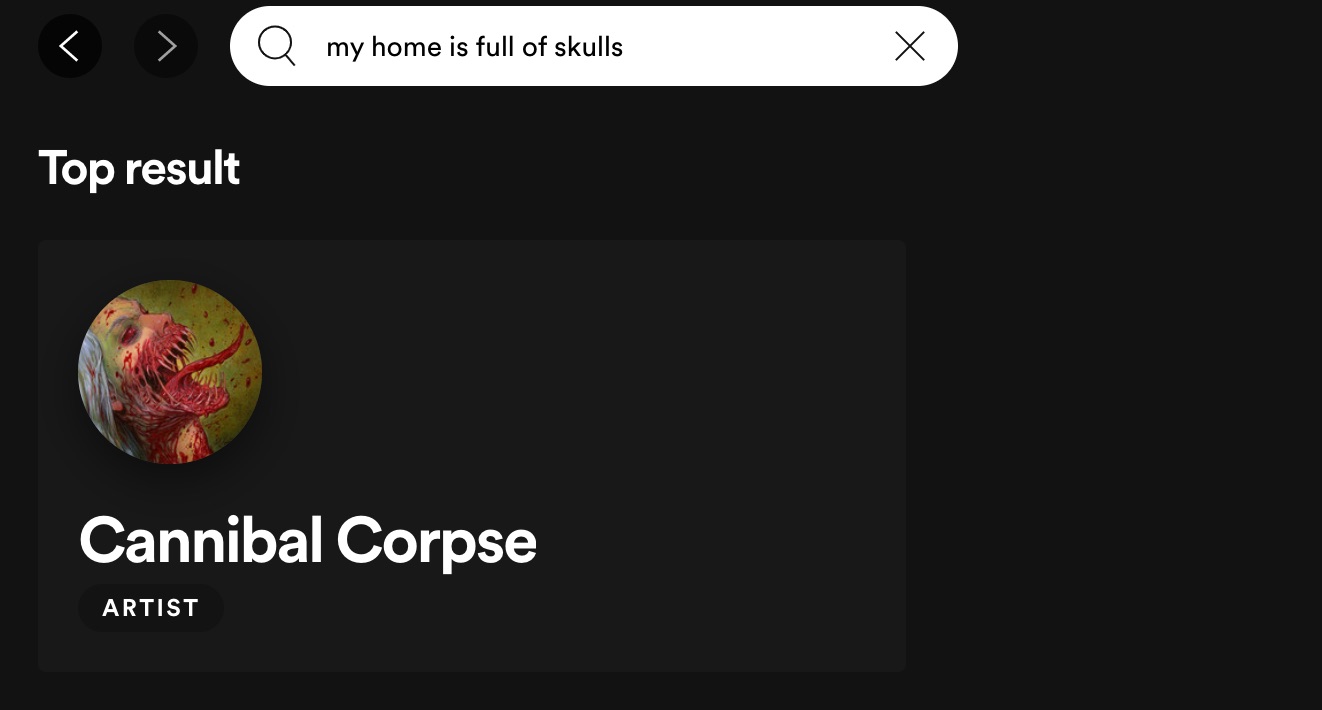 An October 2020 Newsweek.com item, “No One Is Shocked 3 Skulls Were Found in Cannibal Corpse Guitarist’s Home,” centered not on the 2018 news, but on the meme. It clarified that while Cannibal Corpse was “known for shocking song and album titles (the number one song ‘Hammer Smashed Face’ is a real song by the band), the song titles are purely jokes.”

A popular November 2021 Twitter meme juxtaposed a headline about Cannibal Corpse with a supposed Spotify screenshot. The two purported song titles displayed — “I Have Guns in My House, For Murder” and “My Home is Full of Skulls” — satirized the band’s song titles. Although neither was a real Cannibal Corpse song, the meme inspired several Spotify users to apply the joke song titles to playlist names, and Spotify “knew” to match searches for those phrases to Cannibal Corpse.

Iterations [November 9 2021. 2:44 PM]: Coincidentally on November 9 2021, an Imgur post (“When you start taking Metal songs too literally”) topped the site’s “Most Viral” section — with another Cannibal Corpse reference:

At the top of the meme was a headline, “Wife Bursts Open Husband’s Testicles By Smashing Them In Their Wedding Photo Album After She Catches Him Cheating.” Google Trends data indicated that searches for the first few words of that title spiked on November 8 2021, prior to the meme’s Imgur appearance.

Searches for “Wife Bursts Open Husband’s Testicles By Smashing Them In Their Wedding Photo Album After She Catches Him Cheating” led to an “article” (archived) on dailynewsreported.com, an “About Us” page for which noted that its content was wholly fabricated:

Daily News Reported is a fabricated satirical newspaper and comedy website. Daily News Reported uses invented names in all its stories, except in cases when public figures are being satirized. Any other use of real names is accidental and coincidental.