Summary of eRumor:
A photo of a dog sleeping on a grave has gone viral on social media. The story attached to the photo said the dog’s name is
Capitán and refused to leave the grave of its master, Michael Guzmán.
The Truth:
The story is true, but the photo of the dog that we received as an example is a hoax.  Below is a photo of the real Capitán: 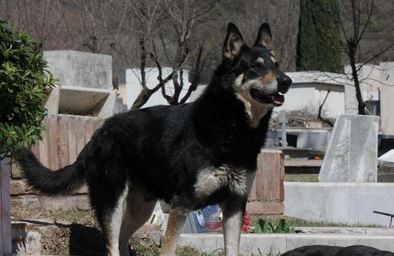 According to a September 13, 2012, article by the New York Daily News, Michael Guzmán died in 2006 and was burried in Villa Carlos Paz, Argentina. Shortly after the death of its owner, the family dog disappeared. Capitán, a German Shepherd mix, was given to the family by a friend about year earlier. A few days after the dog went missing, the family went to visit Guzmán’s grave, and to their surprise, Capitán was spotted by young Damián Guzmán next to his father’s grave. The family had no idea how the dog found the grave.
Guzmán’s wife, Verónica Moreno told reporters, “Damián started to shout that it was Capitán and the dog came toward us barking, as if he were crying.”
The article said that after a few days the dog eventually returned home with the family but for the past six years he has come to the cemetery every evening to sleep on his master’s grave.
Posted 05/16/14