In January 2019, the Facebook page “McGroarty for Freedom” shared the following meme, which contrasted purported positions held by Sen. Chuck Schumer in 2013 and 2018 on the topic of a border wall to separate the United States from Mexico: 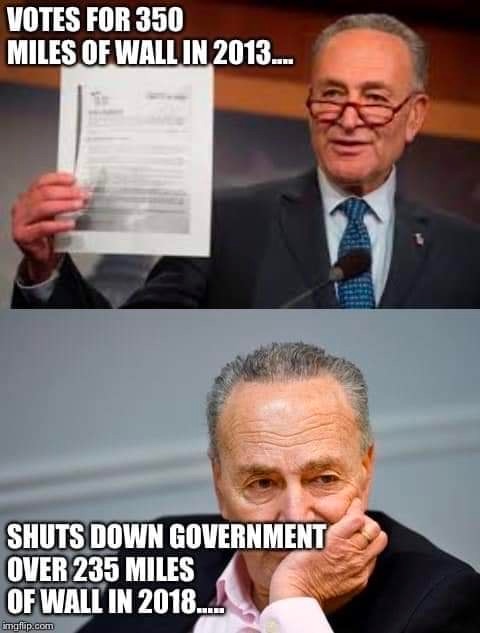 It was composed of two photographs of Schumer, and the meme’s text stated:

Its latter claim was the easiest to tackle, since we’ve addressed the issue of ownership of the government shutdown of 2018 and 2019 on other pages. On January 16 2019, we examined a meme about the “Democrat Shutdown,” which held that the party helmed by Schumer and House Speaker Nancy Pelosi bore responsibility for engineering the weeks-long halt in federal operations.

In that fact check, we linked to a January 7, 2019 fact check about a prior shutdown. On both pages, we noted that President Donald Trump was quite clear about the issue during a December 2018 meeting attended by the three in the Oval Office:

The New York Times quoted an exchange between Schumer and President Trump about a then-impending suspension of federal government operations, adding commentary from Democrat leaders following the meeting. In the exchange, President Trump stated explicitly that he was shutting the government down:

“You want to know something?” Mr. Trump finally said, exasperated. “I’ll tell you what: I am proud to shut down the government for border security, Chuck.”

…Outside the West Wing after the meeting, Mr. Schumer said Mr. Trump had thrown a “temper tantrum” over the wall, later telling reporters, “You heard the president: He wants a shutdown.”

Trump was adamant that the decision to shut down the government was his and his alone, taking the unusual matter of stating on the record that he would not blame Schumer or Pelosi for the circumstance.

The meme’s first and second claims dealt again with what it heavily implied were conflicting actions on Schumer’s part — one, that he voted for “350 miles of wall” in 2013, and two, that he “shut down the government” over “235 miles of wall.” Just as two prior fact checks on this site touched upon issues of the claim, earlier variations of the same rumor abounded on social media.

We located a January 8 2019 WhiteHouse.gov release that provided the “234 miles” number in a larger context:

The Administration has requested $5.7 billion for construction of approximately 234 miles of new steel barrier on the Southern Bor der, a $4.1 billion increase over the Senate bill.

Interestingly, myriad references to “234 miles” of border wall appeared after the White House press release — issued after the government was shut down. Its context was describing how far the requested $5.7 billion would go, not vice versa — the request was not for 234 miles of wall, but for an amount of money that could conceivably fund, apparently, 234 miles of a potential border wall (or fence or barrier, choose your description.)

Those rapidly shifting goalposts were evident in other fact checkers’ efforts. On January 17 2019, we examined related rumors about George W. Bush’s Secure Fence Act of 2006, bandied about to suggest that “the wall” had been fully funded by prior administrations but that the money had disappeared somehow. (It hadn’t.)

By the time FactCheck.org examined the same claim on January 26 2019, the “234 miles of wall” aspect had become firmly embedded in a version of the same meme:

In 2006, former President George W. Bush signed into law the Secure Fence Act of 2006, which called for about 700 miles of fencing along the border with Mexico. That’s a little more than a third of the length of the 1,933-mile border.

Currently, there are 654 miles of fence on the border, including 354 miles of pedestrian barriers and 300 miles of vehicle barriers. An amendment later loosened the terms of the law and gave the Department of Homeland Security discretion in how and where to build it. Then DHS determined that it needed fewer miles of fence than initially designated in the law.

Now, with the government shut down due to an impasse over $5.7 billion sought by President Donald Trump to fund another 234 miles of fencing, that law has been misrepresented in viral memes circulating on social media claiming that it came with a $50 billion allowance that wasn’t used.

It appeared that dueling wall-funding narratives were simply breaking apart and endlessly fusing with other wall-related rumors. A December 20 2018 PolitiFact effort hinged on a similar (but not identical) claim that Democrats had voted for wall funding in 2014. Its researchers concluded that the meme-maker actually intended to point to 2013, the year mentioned in the meme we’re currently examining:

The post says Schumer helped put together a border wall deal in 2014. That’s wrong — there was no border barrier deal that year.

It’s possible the creator of the post was thinking of a 2013 proposal that Schumer shepherded through the Senate. But characterizing the 2013 legislation as a $25 billion deal to fund a “border wall” runs into factual hurdles.

That proposal, a comprehensive immigration plan Schumer sponsored and voted for, cleared the Senate in 2013. But the Republican-controlled House did not take up that bill after that. (It’s worth noting that presidents, not lawmakers, as the meme suggests, sign bills into law.)

The package included more than $46 billion for border security. The vast majority of that money ($30 billion) was for hiring more U.S. Border Patrol agents along the southern border. Around $8 billion would have gone toward building or repairing 700 miles of fencing (including some double-layer fencing) along the U.S.-Mexico border.

That bill was the “Border Security, Economic Opportunity, and Immigration Modernization Act“:

A) INITIAL FUNDING.—Of the amounts transferred to the Trust Fund pursuant to paragraph (2)(A)—

(i) $30,000,000,000 shall remain available for the 10-year period beginning on the date specified in paragraph (2)(A) for use by the Secretary in hiring and deploying at least 19,200 additional trained full-time active duty U.S. Border Patrol agents along the Southern Border;

(ii) $4,500,000,000 shall remain available for the 5-year period beginning on the date specified in paragraph (2)(A) for use by the Secretary to carry out the Comprehensive Southern Border Security Strategy;

(iii) $2,000,000,000 shall remain available for the 10-year period beginning on the date specified in paragraph (2)(A) for use by the Secretary to carry out programs, projects, and activities recommended by the Commission pursuant to section 4(d) to achieve and maintain the border security goal specified in section 3(b), and for the administrative expenses directly associated with convening the public hearings required by section 3(c)(2)(A) and preparing and providing summaries of such hearings required by section 3(c)(2)(B);

(iv) $8,000,000,000 shall be made available to the Secretary, during the 5-year period beginning on the date of the enactment of this Act, to procure and deploy fencing, infrastructure, and technology in accordance with the Southern Border Fencing Strategy established pursuant to section 5(b), not less than $7,500,000,000 of which shall be used to deploy, repair, or replace fencing;

(v) $750,000,000 shall remain available for the 6-year period beginning on the date specified in paragraph (2)(A) for use by the Secretary to expand and implement the mandatory employment verification system, which shall be used as required by section 274A of the Immigration and Nationality Act (8 U.S.C. 1324a), as amended by section 3101;

(vi) $900,000,000 shall remain available for the 8-year period beginning on the date specified in paragraph (2)(A) for use by the Secretary of State to pay for one-time and startup costs necessary to implement this Act; and

(vii) $150,000,000 shall remain available for the 2-year period beginning on the date specified in paragraph (2)(A) for use by the Secretary for transfer to the Secretary of Labor, the Secretary of Agriculture, or the Attorney General, for initial costs of implementing this Act.

The claim that Sen. Schumer shut down the government over 234 miles of wall in 2018 but voted for 350 miles of border wall in 2013 was convoluted and mostly false, except, in true disinformation fashion, for some details in the margins. As repeatedly established, President Trump insisted that he be credited for the shutdown, not Schumer. Schumer did not shut down the government, and the impasse was not over “234 miles of fence,” but $5.7 billion dollars.

After the shutdown began December 2018, the White House released a January 2019 memo asserting that the requested money would build 234 miles of wall. Finally, the bill advanced by Schumer in 2013 focused on a number of provisions, and was not a “wall funding” bill in any direct way.