A CIA agent confessed on his deathbed that he took part in a U.S. plot to detonate World Trade Center 7 on September 11 2001

One of the most prevalent conspiracy theories about the 9-11 attacks — the roundly–debunked idea that they were an “inside job” — got a boost from a “tin foil hat”-level blog devoted to sowing that type of disinformation.

YourNewsWire.com published a post in July 2017 presented as a “deathbed confession” from Malcom Howard, an alleged Central Intelligence Agency (CIA) operative who admitted that he and the agency had executed a “controlled demolition” of World Trade Center 7. According to the post:

The 79-year-old New Jersey native says he worked on the CIA operation they dubbed “New Century” between May 1997 and September 2001, during a time he says the CIA “was still taking orders from the top.” Mr. Howard says he was part of a cell of 4 operatives tasked with ensuring the demolition was successful.

Mr. Howard says the World Trade Center 7 operation is unique among his demolitions, as it is the only demolition that “we had to pretend wasn’t a demolition job”. He claims he had no problem going through with the deception at the time, because “when you are a patriot, you don’t question the motivation of the CIA or the White House. You assume the bigger purpose is for a greater good. They pick good, loyal people like me, and it breaks my heart to hear the shit talk.”

Predictably, the post gained traction online through other fringe blogs: 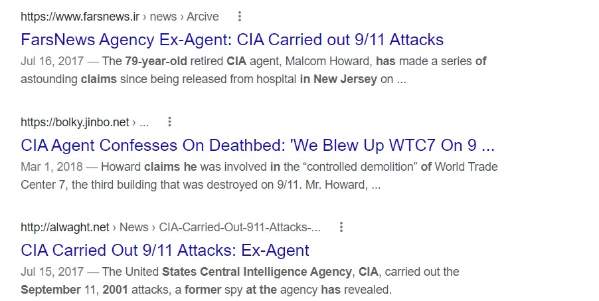 But not even YourNewsWire.com claimed that it was a reputable source for news; the blog’s disclaimer noted that it made “no representations about the suitability, reliability, availability, timeliness, and accuracy” about its content.

The analysis site Media Bias/Fact Check has rated YourNewsWire.com (which has since rechristened itself newspunch.com) “a Tin Foil Hat level conspiracy website that has zero credibility” because of its penchant for disinformation.