A CNN chyron indicated that COVID-19's global death toll was approaching "three million" people on April 26 2020, transposing the rate of reported cases with the rate of deaths worldwide. 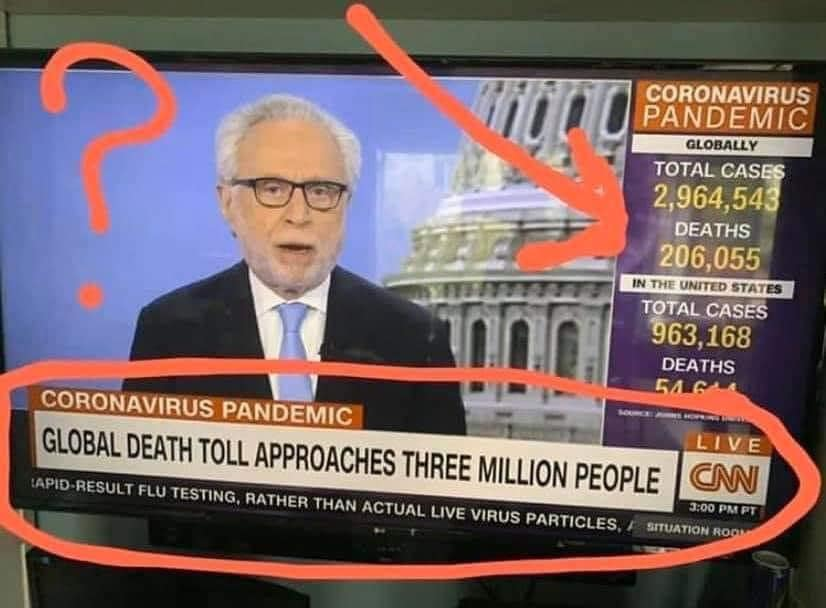 On the right side of the screen was a column titled “CORONAVIRUS PANDEMIC,” with two sections — “GLOBALLY” and “IN THE UNITED STATES.” Under the top column, “GLOBALLY,” were two figures:

Beneath that was “IN THE UNITED STATES,” and the following counts:

On April 26 2020, an unmarked version of the same image was shared to Reddit’s r/funny, with the additional commentary, “CNN is getting a bit ahead of themselves”:

CNN is getting a bit ahead of themselves. from funny

As a benchmark, we visited Google’s page tracking confirmed cases of and deaths from COVID-19 as of 4:49 PM EST on April 28 2020; those figures were updated very regularly: 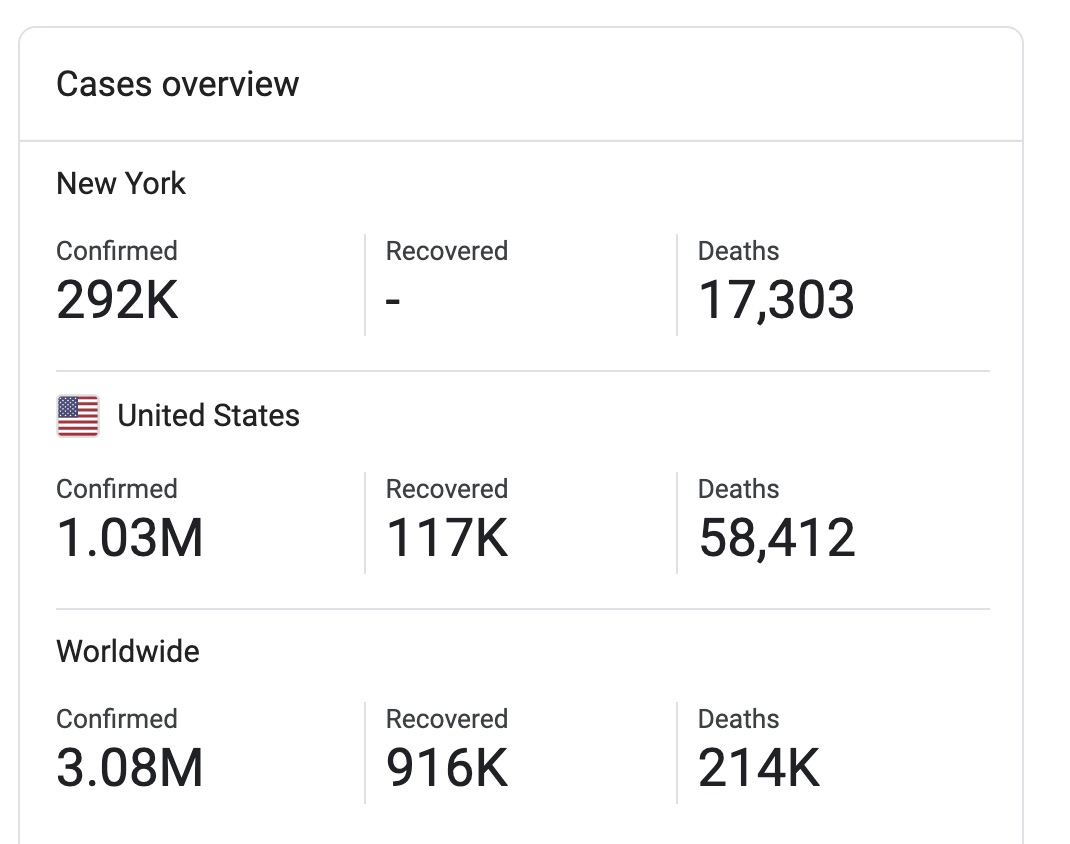 Between the air date of the segment and when we visited the page, the numbers had changed as follows:

We located a non-working link to a transcript on CNN.com, which we were able to view via Google’s temporary cached page:

According to the once-visible transcript on CNN.com, the segment aired on April 26 2020, beginning at 6:00 PM EST (3:00 PM PST, as seen in the screenshot). We archived Google’s cache of the CNN transcript here, and the cache contained the specific verbiage of the chyron:

It’s also worth noting that while the transposed figures seen in the chyron were visible on the screen, they did not match the figures as reported by Blitzer during the segment. Arrows, circles, and other markings on one iteration of the image strongly suggested CNN was, whether deliberately or carelessly, misreporting the statistics in the segment in question.

However, the transcript began:

THIS IS A RUSH TRANSCRIPT. THIS COPY MAY NOT BE IN ITS FINAL FORM AND MAY BE UPDATED.

WOLF BLITZER, CNN HOST: Welcome to our viewers here in the United States and all around the world. I’m Wolf Blitzer in Washington. This is a special edition of The Situation Room.

Around the world right now, nearly three million people — 3 million people — have been infected by the coronavirus. And more than 205,000 people have died. More than a quarter of those deaths happened right here in the United States. The number of Americans dead from this virus is now more than 54,000. By the way, it was exactly one month ago today that the death toll here in the United States was just over 1,000.

At the same time, more states are preparing to crack open the doors to their economies, doors that were slammed shut weeks ago when the pandemic hit. Stay-at-home orders expire tomorrow morning in a few states where restaurants and some stores will be allowed to open under strict safety rules. But officials at the White House tell CNN that social distancing directives are not going away any time soon.

Throughout the transcribed segment, the only other mention of millions outside the quoted portion above were unemployment numbers. The words “death” or “deaths” appeared a total of eight times, four of which occurred in the quoted portion; the remaining mentions did not involve global or in the United States’ death counts.

A screen capture of a chyron from CNN reading “Global Death Toll Approaches Three Million People” appeared to be authentic and unaltered, as indicated by a cached version of a CNN transcript for “The Situation Room with Wolf Blitzer” on April 26 2020. That transcript was accessible only through Google’s cache and an archive, but the reporting in the segment did not match the chyron, nor  did it match the statistics shown on the side of the screen. Also, if CNN had been attempting to mislead the public deliberately, it was unlikely to include the then-accurate global death count of 206,055 alongside the transposed figure nearing three million.