Quarantine is when you restrict the movement of sick people.

On April 28 2020, amid ongoing coverage of astroturfed anti-lockdown protests, a Facebook post claimed that quarantine was intended to “restrict the movement of sick people” (archived here): 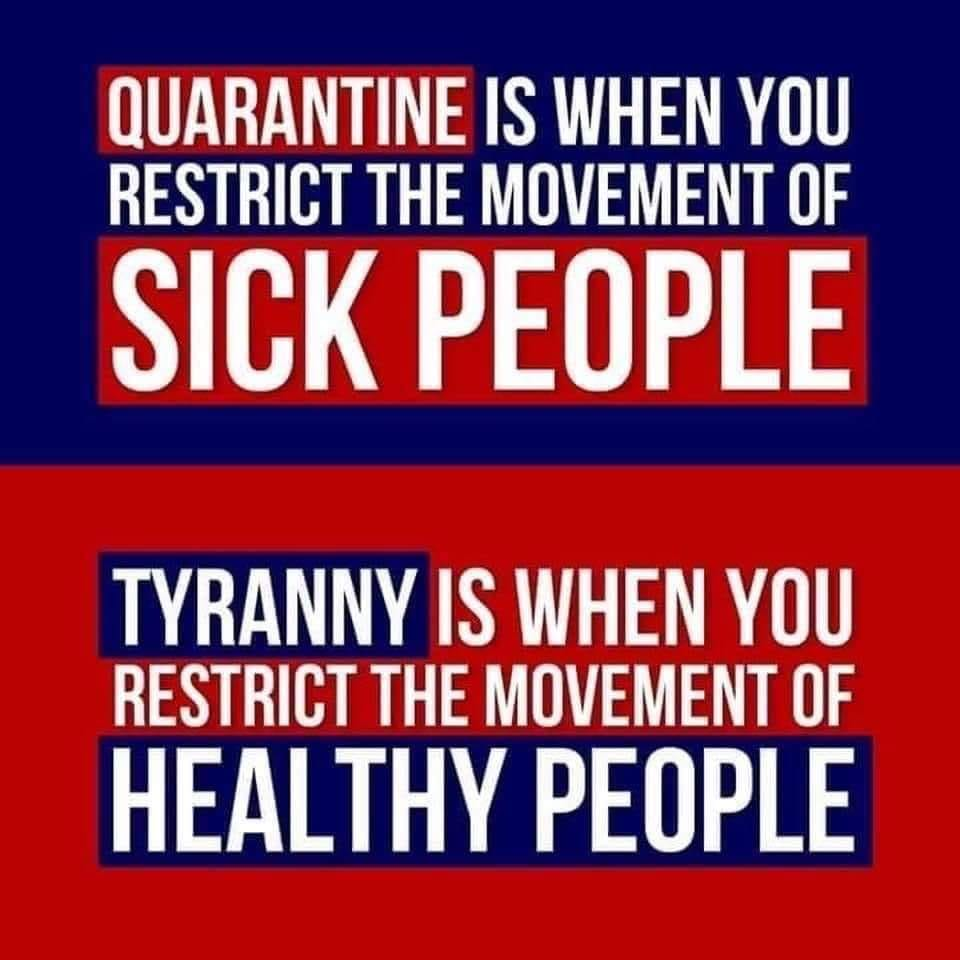 White text against a red and blue background read:

QUARANTINE IS WHEN YOU RESTRICT THE MOVEMENT OF SICK PEOPLE

TYRANNY IS WHEN YOU RESTRICT THE MOVEMENT OF HEALTHY PEOPLE

A single word was added to the post, “Hmmm,” implying that its content was something to ponder in the midst of the COVID-19 pandemic. In fact, this meme simply plays to larger public ignorance about both the meaning and purpose of a “quarantine,” as well as broad lack of understanding regarding the aim of social distancing measures.

Here are some definitions of the word “quarantine” from various sources:

a period of time during which an animal or person that might have a disease is kept away from other people or animals so that the disease cannot spread[.]

1: a period of 40 days
2a: a term during which a ship arriving in port and suspected of carrying contagious disease is held in isolation from the shore
b: a regulation placing a ship in quarantine
c: a place where a ship is detained during quarantine
3a: a restraint upon the activities or communication of persons or the transport of goods designed to prevent the spread of disease or pests

a situation in which a person or animal that might have a disease is kept separate from other people or animals so that they do not catch the disease in quarantine: Animals can be kept in quarantine for up to three months.

noun
a strict isolation imposed to prevent the spread of disease.
a period, originally 40 days, of detention or isolation imposed upon ships, persons, animals, or plants on arrival at a port or place, when suspected of carrying some infectious or contagious disease.
a system of measures maintained by governmental authority at ports, frontiers, etc., for preventing the spread of disease.
the branch of the governmental service concerned with such measures.

verb (used with object), quar·an·tined, quar·an·tin·ing.
to put in or subject to quarantine.
to exclude, detain, or isolate for political, social, or hygienic reasons.

You could also just Google it, and find this at the very top of the page:

a state, period, or place of isolation in which people or animals that have arrived from elsewhere or been exposed to infectious or contagious disease are placed.

Universally, “quarantine” is described as a condition placed upon people (or animals) who do or may have disease; a common trait in definitions for specific reasons.

Historical quarantine signs from past epidemics are available for perusal through various web outlets, such as one from the 1918-1919 Spanish Flu pandemic: 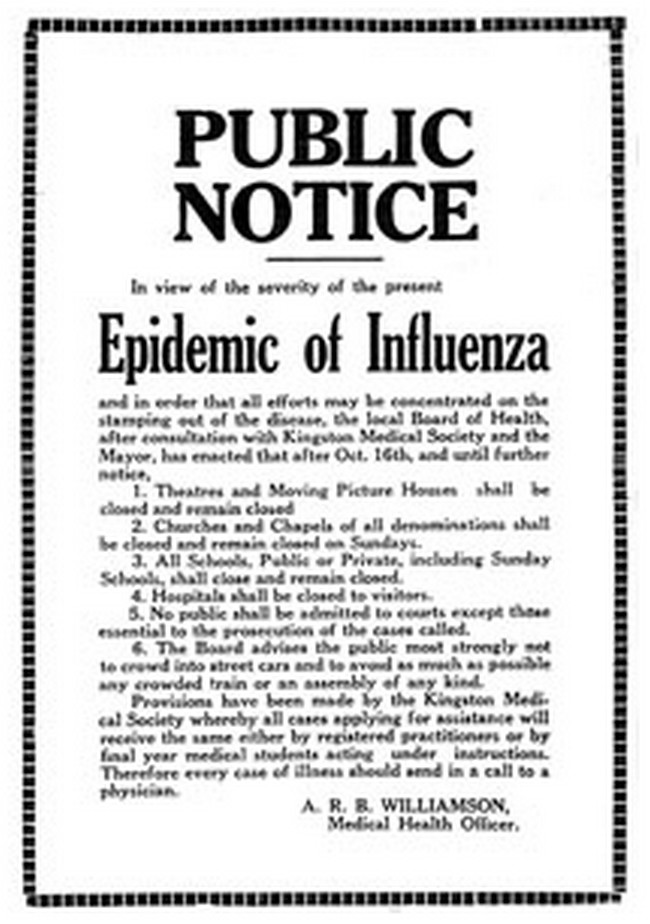 As we explained in a separate April 2020 fact check, an influenza pandemic in 1918 and 1919 killed millions of people and spread in a deadlier second wave in late 1918:

Although the sign embedded above is not easy to read, it’s clear that “movie houses,” “churches,” and “chapels” were among places closed to the ill and healthy alike during that pandemic.

The Larger History of Quarantine

Quarantine as we know it likely dated back to the Black Plague in the Middle Ages. According to the Centers for Diseases Control and Prevention (CDC), the word’s etymological roots come from the Italian phrase for “forty days”:

The practice of quarantine, as we know it, began during the 14th century in an effort to protect coastal cities from plague epidemics. Ships arriving in Venice from infected ports were required to sit at anchor for 40 days before landing. This practice, called quarantine, was derived from the Italian words quaranta giorni which mean 40 days.

State and local governments made sporadic attempts to impose quarantine requirements. Continued outbreaks of yellow fever finally prompted Congress to pass federal quarantine legislation in 1878. This legislation, while not conflicting with states’ rights, paved the way for federal involvement in quarantine activities.

Once again, the goal of quarantine was to prevent transmission — not only from the sick, but also from those who had not yet fallen ill from those who were asymptomatic. Further, preventing “the spread of communicable disease” also involved the movements of healthy people who might contract the disease and themselves become vectors.

On a separate page in its series of quarantine-related resources for public education (“Legal Authorities for Isolation and Quarantine”), the CDC outlined the purposes of “quarantine” and “isolation”:

Isolation and quarantine help protect the public by preventing exposure to people who have or may have a contagious disease.

• Isolation separates sick people with a quarantinable communicable disease from people who are not sick.
• Quarantine separates and restricts the movement of people who were exposed to a contagious disease to see if they become sick.

To reiterate, “isolation” referred to known infected and ill people, and separating them from the general public. “Quarantine” specifically referred to the “movement of people … exposed to a contagious disease” to see if they fall ill. Quarantine when contrasted with isolation was, again, for people who had not yet become sick, to prevent the spread of sickness by people infected but not ill.

The Department of Health and Human Services (HHS) provided a nearly identical resource defining “quarantine” and “isolation” for the purposes of public health, adding:

As of April 27 2020, that descriptor could easily be applied to Americans under “stay at home” or “shelter in place” orders. Those people “may have been exposed” and “not know it,” or they “may have the disease” and not show symptoms.

Asymptomatic Novel Coronavirus Carriers and the Necessity of Quarantine

As of April 3 2020, reports indicated a full 25 percent of SARS-CoV-2 (the virus that causes COVID-19) were fully asymptomatic — a big deal number. And those people likely never become ill to begin with:

According to Robert Redfield, the director of the [CDC], 25 percent of people infected with the new coronavirus don’t present any symptoms or fall ill but can still transmit the illness to others.

And you may have heard the term “novel coronavirus,” which alludes to the fact this strain of coronavirus is completely new (which has led to its own genre of disinformation and misinformation); researchers are constantly learning new and important things about how it infects and spreads. That is why less than a month later on April 24 2020, the estimate of asymptomatic carriers rose to as many as fifty percent.

If we view that information through the lens of the history of quarantine, it’s important to bear in mind it started due to an inability to test for or treat carriers of previous illnesses during pandemics or epidemics.

It is also true that some protested against those historical measures, too — either a result of not understanding or refusing to understand why quarantine was important:

In some countries, the suspension of personal liberty provided the opportunity—using special laws—to stop political opposition. However, the cultural and social context differed from that in previous centuries. For example, the increasing use of quarantine and isolation conflicted with the affirmation of citizens’ rights and growing sentiments of personal freedom fostered by the French Revolution of 1789. In England, liberal reformers contested both quarantine and compulsory vaccination against smallpox. Social and political tensions created an explosive mixture, culminating in popular rebellions and uprisings, a phenomenon that affected numerous European countries. In the Italian states, in which revolutionary groups had taken the cause of unification and republicanism, cholera epidemics provided a justification (i.e., the enforcement of sanitary measures) for increasing police power.

A lack of testing and ability to treat the ill were a driving force behind prior quarantine orders.

Only One Percent of Americans Have Been Tested for Novel Coronavirus

Although statistics changed daily, as of April 22 2020, only one percent of Americans had been tested for the virus which caused COVID-19:

The Math on That

We are not mathematicians. But we don’t need to be to point out that if just over one percent of Americans had been tested for novel coronavirus as of late April 2020, and 25 to 50 percent of the infected would never be sickened, the need to quarantine or restrict the movement of the possibly infected perhaps becomes apparent.

Historically and through 2020, quarantine was never designed to apply to “sick people”; the word for that is isolation. Quarantine, by contrast, was for people who might have been exposed to an infectious disease, for the duration of the time that they might pass the disease on to others. Finally, 25 to 50 percent of coronavirus carriers never get sick, and just over one percent of Americans had been tested as of April 2020. The meme was not only ignorant, but dangerously so — in fact, it ought to be quarantined until it can no longer do harm.