Ultraviolet light (UV) can be injected into a person's body to help them fend off COVID-19.

As attention swirled around “sarcastic” remarks concerning the use of household disinfectants to treat COVID-19, some social media users attempted to gin up more support for United States President Donald Trump by fixating on another theory he shared during a heavily-criticized appearance on April 23 2020.

During the press briefing, Trump said:

Supposing we hit the body with a tremendous — whether it’s ultraviolet or just very powerful light. And I think you said that hasn’t been checked, but we’re going to test it? And then I said, supposing you brought the light inside the body, either through the skin or some other way.

To date, there is no evidence that putting sunlight into your body can help fight against the disease. But the president’s statement has since been refitted into a graphic circulating around Facebook showing a purported infusion of light into a human arm: 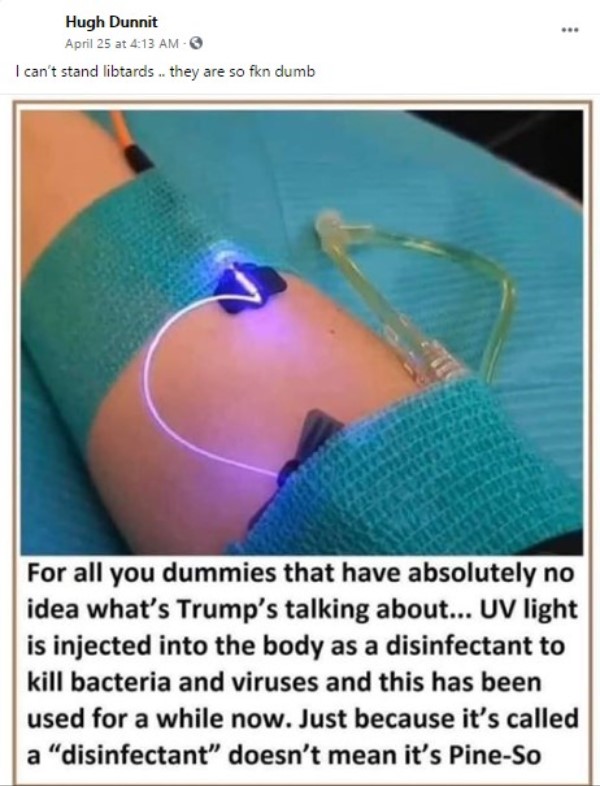 According to a caption often placed alongside the photo:

For all you dummies that have absolutely no idea what Trump’s talking about … UV light is injected into the body to kill bacteria and viruses and this has been used for a while now. Just because it’s called a “disinfectant” doesn’t mean it’s Pine-So [sic]

One iteration of the post attributes the photograph to Stephanie Grutz, as well as a statement saying that it was taken in 2017 at a clinic in Seattle. She wrote:

I’m an independent voter, always have been. Definitely had had strong opinions about this current president. But, putting politics aside, his words made me literally jump up in excitement.

IV laser light therapy helps repair mitochondria, fight pathogens, boost mood/energy, enhance the immune system and more. I did this light therapy with a specific IV protocol of nutrients and antibiotics while my body was preparing for a specific treatment

But in a separate post on April 25 2020, she wrote that she had heard from people “who are trying to validate their perception of the President’s comments trying to use my medical experience to ‘prove’ their point.” Later, Grutz wrote that she had removed her statement, saying that it had become a “political tool”:

My post was never meant to be political and unfortunately that is what it has become and the reason why I chose to remove it. Unfortunately this is the time we live in. Instead of focusing on health and healing, we focus on divisiveness and being heard.

Trump’s original remarks came after a presentation by Bill Bryan, head of the Department of Homeland Security’s science and technology directorate, saying that “emerging” research carried out by the U.S. Army showed that increases in temperature and humidity cut the half-life of COVID-19 — the amount of time it takes for any given amount of the virus to be reduced by 50 percent — down from 18 hours to one hour.

“Within the conditions we’ve tested to date, the virus in droplets of saliva survives best in indoors and dry conditions,” Bryan said. “The virus dies quickest in the presence of direct sunlight.”

However, the study he mentioned has not been peer-reviewed, and Bryan himself did not offer its results as any sort of panacea. “It would be irresponsible for us to say summer will kill the virus,” he said.

According to a separate study at Columbia University, though, a type of ultraviolet light, “Far-UVC light,” could be used to stop the spread of the virus in public settings. Instead of using light on people who have already been diagnosed with the disease, the study said, lamps could be outfitted to emit “Far-UVC light” in open spaces and prevent its spread that way.

Lead researcher David Brenner and his team are reportedly testing this type of light specifically for use against COVID-19 (also known as SARS-CoV-2, or simply “the coronavirus”) alongside researchers from the Center for Infection and Immunity. However Andrea Martin Armani, a researcher at the University of Southern California, told Fast Company magazine that she was skeptical of this approach.

“The idea of directly exposing people with UVC is a very bad idea and would have numerous negative health effects,” said Armani, a professor of chemical engineering and materials science at the university as well as the Ray Irani Chair in Engineering and Materials Science. “The negative effects of direct UVC exposure on humans is backed up by decades of medical research.”