Entertainer Martha Raye was a U.S. Army nurse and held the rank of Colonel-Truth! & Fiction!

Summary of eRumor:
This is a forwarded email about actress and singer Martha Raye who entertained United States troops with the USO service organization during World War II and conflicts in Korea, and Viet Nam. The eRumor tells of an account where as an Army Colonel she allegedly pulled rank on an Air Force Captain and treated the wounded onboard the aircraft while she was on route to military base for a USO show The eRumor also says that when she died she was buried at Fort Bragg and the only woman in the special forces part of the cemetery.
The Truth: 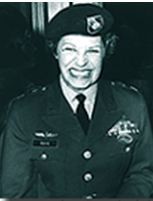 Noonie Fortin, Martha Raye’s biographer told TruthOrFiction.com that Raye was lovingly called “Colonel Maggie” but the rank of Lt. Colonel and membership of the Green Beret Special Forces unit were both honorary. The entertainer was also an honorary Colonel in the United States Marine Corps.
Fortin, who wrote “Memories of Maggie,” also said that it was not uncommon for Ms. Raye to jump in to assist in caring for wounded serviceman throughout her history with the USO. Fortin said “She would often pull rank, pointing out the oak leaf or bird on her collar and Green Beret as well as the nurse’s emblem. Likewise she often helped out in the surgical units and wards.”

The Department of Defense issues non-military identification cards to civilians who accompany armed forces to present in the event of capture.  Each card contains the person’s name and vital statistics such as height, weight, eye color and blood type.  The cards also have what is called a “Geneva Conventions category.”  Category IV issued to such volunteers which is a rank equivalent to majors, lieutenant-colonels, colonels.
Fortin told TruthOrFiction.com that “Maggie took it a step further and began wearing a uniform with the rank on it. As time progressed so did the honorary rank she held. By the time Vietnam ended she was a Lieutenant Colonel for the Army and Colonel for the Marines but wasn’t really a member of either branch. Everything was honorary titles including the ribbons that she would often wear though some years later were actually awarded to her.”

Raye received numerous awards and commendations from the military in appreciation for her years of service and in 1993, President Bill Clinton awarded the entertainer with the Presidential Medal of Freedom.

Raye died on the 19th October, 1994 and  was buried among veterans of many wars at the Fort Bragg Cemetery in Fayetteville, NC. Special request had been made for her to be buried there since she wasn’t military.