A 58-year-old "creepy clown" was arrested in connection with a haunted house massacre that left 18 people dead.

Amid the rash of “creepy clown” sightings around the U.S., the junk blog “Now 8 News” recycled its tactics to push another fabricated story online.

In October 2016, the website posted a macabre (fabricated) story about a clown being arrested in connection with a “haunted house massacre”:

Salem, MA – Creepy Clown Arrested After Haunted House Massacre: A 58-year-old man was arrested on Wednesday evening after fright junkies got way more than they bargained for at a haunted house attraction in Salem, Massachusetts. The “Fright Night Horror Massacre” haunted house was it in its third year of production when last evenings haunted house goers stumbled across a horrific scene.

Eyewitnesses say they were halfway through the macabre haunted house when they came across a scene of a crazy looking man dressed as a clown with a chainsaw. At first, it was just another scene of the haunted house, but as they look closer they saw one of the bodies move and then scream for his life. The young boy, approximately 19 years of age, was already partially dismembered by the man dressed in a gruesome clown costume.

Police and emergency response teams arrived on the scene within minutes, but unfortunately it was too late for the 18 bodies they found scattered throughout the “Fright Night Horror Massacre” maze.

The post was shared nearly 25,000 times and circulated online again a year later. If it seems familiar, that’s because it recycles the tropes used in the October 2015 “story” about a Texas man allegedly found “eating a teenage boy”: 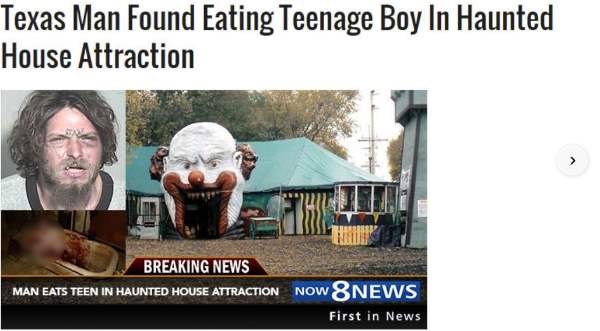 In both cases, “Now 8 News” added to its fabrication by ripping off a real mugshot. In this instance the “58-year-old man” was actually a man arrested in 2013 for allegedly driving drunk while wearing facepaint to make himself look like the DC Comics villain The Joker.

As we have noted before, the blog dupes readers into sharing its content sight-unseen by disguising itself as a local television outlet. It also refuses to label itself as “satire.”

Given all that, we’re calling claims about a creepy clown killing eighteen people “fiction,” because it is.