A convergence of marketing stunts that spread online and authentic incidents around the U.S. and United Kingdom led to clowns re-entering the public eye in 2016 — though in truly unfunny ways.

The first reported “creepy clown” sightings in the U.S. that year emanated from Green Bay, Wisconsin, where a solitary figure was photographed walking through the downtown are carrying black balloons: 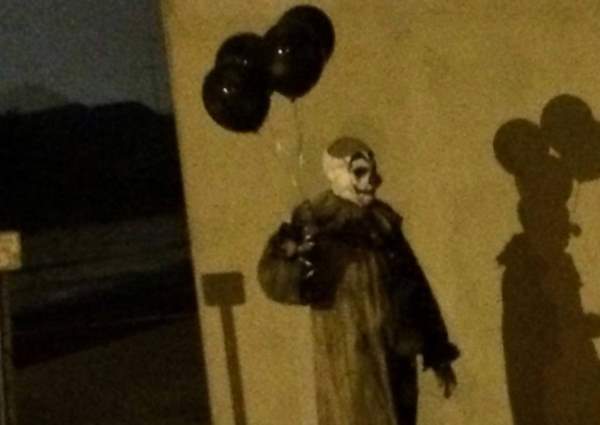 As the local Press Gazette reported at the time, that was by design:

The handful of dimly lit photos of a sinister-looking clown with a clutch of black balloons, dubbed “Gags,” was the first salvo in an online marketing campaign for a locally produced short film.

Adam Krause, of Green Bay, announced on Facebook this week that “Gags” is the title of an upcoming short film for which he is the writer, producer and director.

Gags the Clown’s official Facebook page was created Aug. 2. Krause wrote on Facebook that he hoped he and others involved with the film could use social media to create a small viral campaign that would reach a couple hundred people.

The first photos of Gags were shared tens of thousands of times, exceeding Krause’s initial expectations. The attention ignited a social media firestorm that attracted all kinds of people who, whether they thought it funny or terrifying, could not help but click the “share” button.

“Back in 2014, I came across a news story that detailed the exploits of an individual who dressed up like an ‘evil’ clown and wandered the streets at night,” Krause wrote on the film’s Facebook page. “Then another one popped up. Then another. Soon, it was a phenomenon. And people were loving it.”

Within a week and a half, the movie’s Facebook page amassed more than 50,000 “likes” on Facebook as well as press coverage outside the U.S. But C.J. Guzen, a local actor who auditioned for a role in the short film, later expressed concern that Krause’s marketing ploy worked too well.

“It’s getting a little bit scary because people are starting to believe it a little bit more, and we’re starting to see some of those unsettling pictures on Facebook,” Guzen told KORG-TV. “Not of the clown, but of people armed and preparing to defend themselves, saying ‘I can’t go outside because I’m afraid of clowns’ or whatever. That’s just a little too far.”

The short film led Krause to put together a long-form “Gags” movie, which premiered in October 2018 in Green Bay, with some filmgoers donning their own clown attire for the occasion.

While Krause’s creation was creeping people out in Wisconsin in 2016, a Massachusetts man hit on a similar idea that same year in promoting a haunted house attraction; Mark Del Negro found himself at the center of his own viral video as his footage of a creepy clown outside a supermarket carrying a sign saying “Free Hugs” was viewed millions of times: 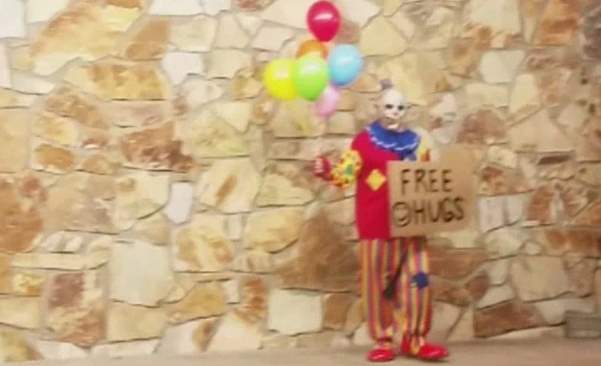 Del Negro told WWLP-TV that he had to convince a neighbor not to escalate into real violence.

“He actually thought it was real and was actually ready to create a mob to go and look for the clown,” Del Negro said. “I had to tell him that. I was like, ‘Dude that was a fake video don’t get all upset about it.’ On his Facebook post he said, ‘They picked the wrong town’ and he’s a big dude and I was like, ‘Dude we didn’t pick any town it was like five minutes away from my house.’

Del Negro said that he apologized to anyone who might have been offended by the video, but added, “I guess it was better than the actual commercials we paid for.”

While those sightings were “legitimate” insofar as there was actually a clown involved, the fear of clowns led to a rash of false — or outright falsified — reports of clown sightings. As Vox reported, the surge began in the Carolinas but soon spread around the country:

The clown hoaxes spread regionally throughout the Southeast US, up the coast, and then west. The fearmongering grew, sometimes perpetuated by authorities themselves but largely by the media, which has tended to report the clown hoaxes with straight-faced solemnity.

According to The Guardian, a similar phenomenon unfolded in the United Kingdom that September:

Police in Newcastle received reports of someone dressed as a “creepy clown” leaping out of bushes to scare children. Over the next few days, half a dozen such clown incidents were recorded. A teenage clown was arrested in possession of a “bladed article”. On 5 October, the tabloids announced that a “terrifying clown craze” had hit these shores. And so it began to spread.

The first named victim was 17-year-old student Megan Bell, who has a “lifelong fear of clowns” and was chased down the street by one at night. Soon, more clowns began to pop up: in Wales, Manchester, Sheffield and Liverpool. Then just about everywhere. Concerned parents made Facebook pages about clowns, thus inadvertently helping to spread the meme.

Both publications have described the phenomenon as “The Great Clown Panic of 2016.” Regarding the panic itself around them, psychotherapist Aaron Balick said that peoples’ childhood feelings about clowns — positive or negative — had helped fuel the spread of both social media posts about “creepy clowns” and the unease surrounding them.

“This volatile mix of intense feeling and contagion via social media spreads the idea of participating in an emotionally charged behavior to such a large population that even if a tiny percentage of its viewers wish to mimic it, we’re bound to see instances of it far and wide,” he told the Guardian.

He also suggested that, just as avoiding a creep in the physical space can help defuse their threat, not giving oxygen to clown-related content can stop that “contagion” from spreading as well.

“The media has an interest in reporting clowns; we the public like hearing scary stories about clowns; certain individuals pick up on the idea of being clowns,” he said. “And on it goes.”