On May 19 2020, a Facebook user shared the following text, alongside a screenshot of a YouTube channel called “Dad, How Do I?” (with an edit included after the post began rapidly spreading):

This YouTuber’s dad walked out on his family when he was 12 years old.

Now that he’s a father of his own two adult children, he’s created a YouTube channel called “Dad, how do I?” where he posts videos of common tasks you might ask your dad for help with, so that children without fathers can use his videos as a resource.

I don’t know this man, but he got an instant subscribe from me. What an amazing, selfless thing to do for someone else. It’s stories like these that give me hope for humanity.

VIRAL EDIT: Wow this blew up, thanks for all the shares! I’ve emailed him directly in hopes that he sees this post and can utilize this momentum to keep expanding his platform.

From the time I posted this, he’s already doubled his subscribers on YouTube and I couldn’t be more happy for him!

A screenshot seemingly captured on a phone provided a glimpse into content on the “Dad, How Do I?” channel:

In most of the visible thumbnails, the same man was visible. To the right of the thumbnails were video titles with modest view counts:

However, interest in the channel “Dad, How Do I?” was not solely generated by Facebook users. On the same day, a Reddit user shared a screenshot of a tweet to the subreddit r/nextfuckinglevel — itself devoted to individuals or acts that are impressive:

Found a YouTube channel of this guy who's Dad walked out on him when he was 12.

Now a dad to two (adult) kids himself, he's made a YouTube Channel called "Dad, How Do I?" – where he makes maintenance videos for people with no Dads.

That tweet featured several thumbnails from the channel and said:

Found a YouTube channel of this guy who’s Dad walked out on him when he was 12.

Now a dad to two (adult) kids himself, he’s made a YouTube Channel called “Dad, How Do I?” – where he makes maintenance videos for people with no Dads.

UPDATE: his subscriber count has hit a whopping 156,000 subs. This has to be the most amazing thing I've ever seen in my life.

From watching his video, the guy deserves it. Hope he gets all the recognition and love in the world. pic.twitter.com/CK8OxtOLd2

According to Google Trends, it took a few days for the tweet’s message to reach the social media masses, and searches for “Dad, How Do I?” spiked on May 19 2020: 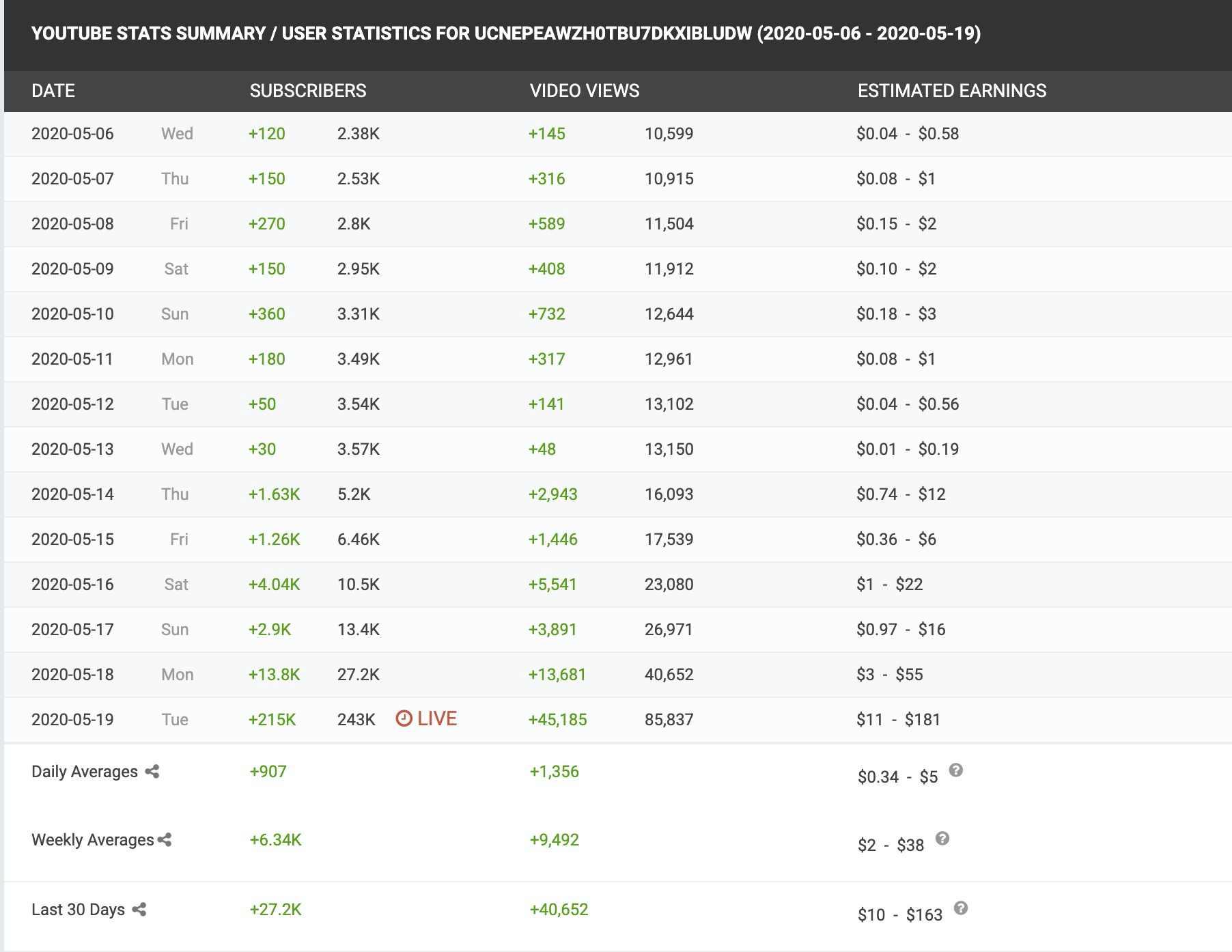 As of May 19 2020, YouTube channel “Dad, How Do I?” had more than half a million subscribers and a creation date of April 1 2020. An “about” section included links to coverage of the channel, and read:

“How To” videos by a dad who has raised 2 adults (and we still talk).
I will do my best to provide useful , practical content to many basic tasks that everyone should know how to do.
I will release a new “How to” video every Thursday.
I am planning to start “Tool Tuesday” May 26th, where I will go over a tool a week to help you complete your tasks.

One of the linked articles, published on April 29 2020, delved into channel creator Rob Kenney’s early life. Although the short social media posts indicated Kenney’s father “walked out” when he was 12, the actual story was a bit more nuanced and sobering:

Where are you going?” Rob Kenney’s brother asked him, standing in the kitchen of their 1970s home in Bellevue, Washington. Barely a teenager at 14, Rob had no idea where one goes when a father tells his eight children he doesn’t want them anymore.

The older siblings took the younger ones in, which meant Rob’s 23-year-old, newlywed brother took 14-year-old Rob into his 8-by-35-foot mobile home. They lived in close quarters, and Rob now sympathizes with his brother, who instantly became responsible for a moody teenager.

While Rob’s father worked in a neighboring city, the marriage deteriorated. Rob’s father became calloused towards his family, eventually falling in love with another woman.

The custody battle raged on after the divorce, and Rob’s father filed a restraining order against his mother.

“He got custody of us, but he didn’t really want us,” Rob said. “I think he was kind of done by that time.”

The kids lived on their own for weeks at a time. Their father loaded them up with groceries then left town for a week of work. The breaking point took place just before that day in the kitchen when Rob’s dad told his older siblings he didn’t want them anymore.

Kenney’s “Dad, How Do I?” channel and truncated backstory seemed to strongly appeal to quarantined readers weary of COVID-19 news and political backbiting. Condensed posts claimed Kenney’s motivation was early paternal abandonment, but a then-recent profile told a slightly more detailed story. The channel was real and accurately described, and Kenney created a companion Facebook page — also called “Dad, How Do I?”