"This is Dasia Taylor. She invented a new type of suture that changes color to show if a wound is infected. She won the state science fair, became a finalist in a national competition, and now has her sights set on a patent. She's only 17."

On February 1 2022, the Facebook page for Missouri radio station Y107 (KTXY-FM) shared a meme about Dasia Taylor, a teenager who purportedly developed a suture technology to detect infections: 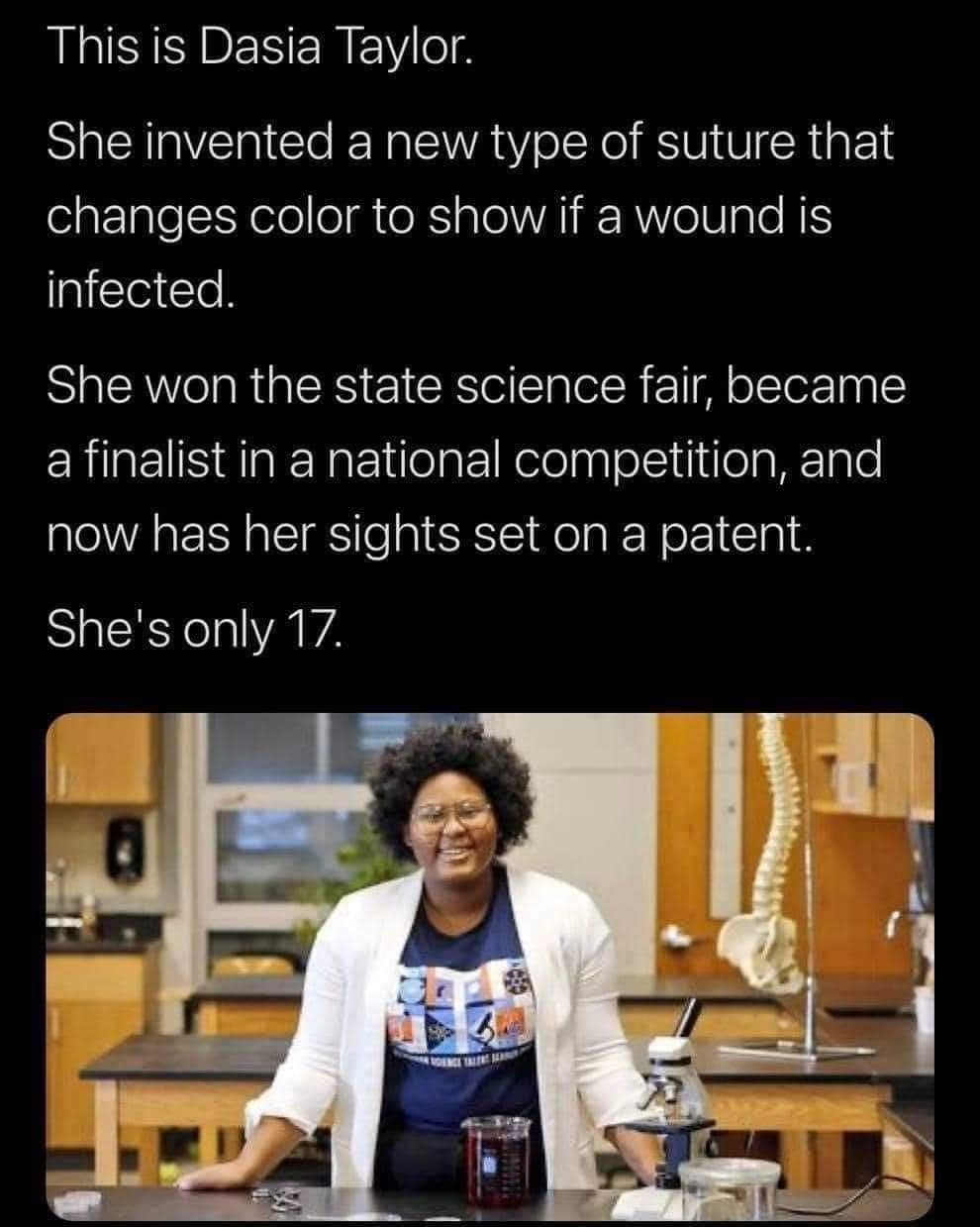 Alongside the meme, Y107 simply hashtagged the post #BlackHistoryMonth, and no source or citation for its claims appeared anywhere on the post. In addition to a photograph of a young woman in a laboratory setting, text read:

This is Dasia Taylor.

She invented a new type of suture that changes color to show if a wound is infected.

She won the state science fair, became a finalist in a national competition, and now has her sights set on a patent.

Google Trends data indicated sustained interest in searches related to the post for the seven-day period ending February 17 2022. Searches for “Dasia Taylor” and “Dasia Taylor suture” were both popular.

This is Dasia Taylor.

She invented a new type of suture that changes color to show if a wound is infected.

She won the state science fair, became a finalist in a national competition, and now has her sights set on a patent.

In a follow-up tweet from the same day, @Goodable linked to two articles about Dasia Taylor and the suture she developed. One was a January 2021 article in Iowa outlet The Gazette, “West High senior creates color-changing sutures to detect infection.”

That coverage included the image of Taylor seen in the tweet, and it reported in part:

After a year of research, the 17-year-old is working on getting her sutures patented. She envisions these sutures being used in developing countries where they can save lives and money … Dasia was named among the top 300 scholars this year [2021] for her project in the 80th Regeneron Science Talent Search, a science and math competition for high school seniors … Dasia’s sutures work by changing color if the patients pH level alters, indicating an infection.

Infections after Cesarean sections particularly caught Taylor’s attention. In some African nations, up to 20 percent of women who give birth by C-section then develop surgical site infections. Research has also shown that health centers in Sierra Leone, the Democratic Republic of the Congo and Burundi have similar or lower rates of infection, at between 2 and 10 percent, following C-sections than the U.S., where rates range from 8 to 10 percent.

“I’ve done a lot of racial equity work in my community, I’ve been a guest speaker at several conferences,” says Taylor. “So when I was presented with this opportunity to do research, I couldn’t help but go at it with an equity lens.”

In addition to describing Taylor’s inspiration for the color-changing, infection-detecting sutures, the outlet further described how Taylor tested and developed them:

Healthy human skin is naturally acidic, with a pH around five. But when a wound becomes infected, its pH goes up to about nine. Changes in pH can be detected without electronics; many fruits and vegetables are natural indicators that change color at different pH levels.

“I found that beets changed color at the perfect pH point,” says Taylor. Bright red beet juice turns dark purple at a pH of nine. “That’s perfect for an infected wound. And so, I was like, ‘Oh, okay. So beets is where it’s at.’”

Next, Taylor had to find a suture thread that would hold onto the dye. She tested ten different materials, including standard suture thread, for how well they picked up and held the dye, whether the dye changed color when its pH changed, and how their thickness compared to standard suture thread. After her school transitioned to remote learning, she could spend four or five hours in the lab on an asynchronous lesson day, running experiments.

A cotton-polyester blend checked all the boxes. After five minutes under an infection-like pH, the cotton-polyester thread changes from bright red to dark purple. After three days, the purple fades to light gray.

A February 2022 Facebook post about Dasia Taylor’s suture innovation spread virally; the post was a screenshot of a March 2021 tweet by the account @Goodable. In January 2021, Iowa’s The Gazette reported on Taylor’s color-changing sutures. In March 2021, SmithsonianMag.com profiled Taylor, reporting on why and how she developed a suture that changes color to detect an infected wound. Although the original tweet was from March 2021, its claims were accurate and reported upon in early 2021.