Heading into one of two Senate runoff elections in Georgia, a photograph of right-wing incumbent Sen. David Perdue — and the purported intent behind it — received newfound attention in January 2021, including a side debate over whether it was even real.

The photograph itself is legitimate; it was taken in October 2020 and posted to Facebook by a Republican Party campaign staff member, Jasper Preston. Preston wrote at the time:

No pomp and circumstance, no boasting, they don’t get the front seat, they just work. And it humbles me everyday to have these two as interns with the Trump Victory Campaign. 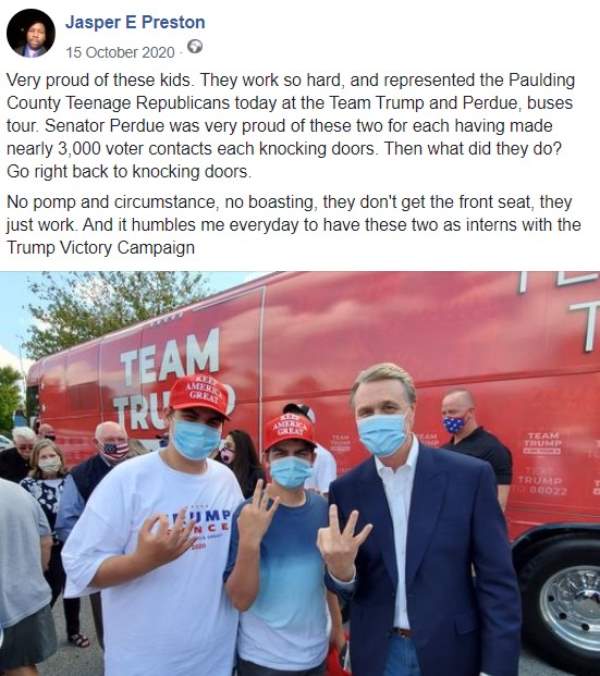 Many people would hold up three fingers this way:

But the way Perdue and his companions marked their achievement carried more ominous connotations. In posting the photograph on Twitter on January 1 2020, activist group Blue Georgia said, “David Perdue [was] giving the white power sign at his rally.”

The “white power sign” in question is the gesture that the Anti-Defamation League (ADL) describes as the “okay hand gesture.” The group, which monitors anti-Semitic activity, identified it as a racist hate symbol in 2019, though with the caveat that someone making it “cannot be assumed” to be engaging in hate speech or trolling:

In 2017, the “okay” hand gesture acquired a new and different significance thanks to a hoax by members of the website 4chan to falsely promote the gesture as a hate symbol, claiming that the gesture represented the letters “wp,” for “white power.” The “okay” gesture hoax was merely the latest in a series of similar 4chan hoaxes using various innocuous symbols; in each case, the hoaxers hoped that the media and liberals would overreact by condemning a common image as white supremacist.

By 2019, at least some white supremacists seem to have abandoned the ironic or satiric intent behind the original trolling campaign and used the symbol as a sincere expression of white supremacy, such as when Australian white supremacist Brenton Tarrant flashed the symbol during a March 2019 courtroom appearance soon after his arrest for allegedly murdering 50 people in a shooting spree at mosques in Christchurch, New Zealand.

Another civil rights group, the Southern Poverty Law Center, noted that, in other instances, news outlets have downplayed allegations that the “OK” gesture was used as a right-wing trolling gesture. That type of reporting, the SPLC said, helps normalize such incidents:

While the people who flash the sign can always readily claim innocence of any racist intent by attesting that they “only meant it ironically” and that their real purpose was to anger liberals, minorities and “social justice warriors (SJWs),” they can’t so readily escape ethical culpability for their role in the spread of hateful ideologies and their effects, including a global spike in hate crimes. Nor can they blame members of the minority groups who reasonably find such hand signals potentially threatening for being upset.

Preston has defended Perdue, suggesting in a separate Facebook post that the criticism lobbied at the photograph was instigated by the senator’s Democratic Party challenger, Jon Ossoff, and his allies and supporters.

“The boys in the picture are Native American. They are celebrating reaching 3,000 voter contacts – nothing about white supremacy!” Preston wrote. “It’s sad the left is perfectly willing to try to ruin the lives of young conservatives in order to advance their agenda.”

However, the nature and connotations of the hand gesture were well known within American politics by October 2020, including its association with white supremacists; it is difficult to believe that the three people in the photograph were unaware of that particular connotation, given how much coverage it had already received.

However, the nature and connotations of the hand gesture were well known within American politics by October 2020, including its association with white supremacists.

Perdue was criticized in October 2020 when he deliberately mispronounced Senate colleague and Vice President-Elect Kamala Harris’ first name during a campaign speech, adding “I don’t know, whatever” after the smear. A campaign spokesperson subsequently claimed that Perdue “didn’t mean anything by it.”