A right-wing U.S. lawmaker’s attempt to claim that “Antifa” threatened his family was immediately debunked by video showing a peaceful protest outside his home.

The activist group ShutdownDC streamed video of its demonstration on January 4 2021 outside the home of Missouri Sen. Josh Hawley. Hawley is one of eleven senators supporting an illegal attempt by outgoing U.S. President Donald Trump to ignore the outcome of 2020 presidential election and falsely re-install him for a second term.

Hawley — who was not at his residence at the time of the protest — claimed on Twitter that the group “threatened” his wife and daughter and “screamed threats, vandalized, and tried to pound open our door.”

“Antifa scumbags came to our place in [Washington] DC,” he claimed, failing to mention that his home is actually in Virginia. 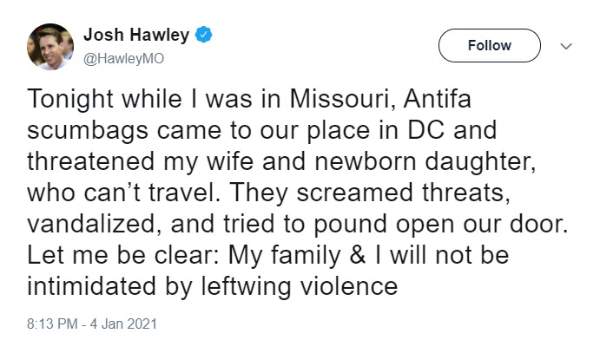 However, footage of the event and several posts on Twitter debunked his claims. For instance, three people can be seen approaching the door at one point in the video:

But the video does not show any attempt to open the door or force entry. Instead, one protester can be seen putting something down by the door; members have said that the object was a copy of the U.S. Constitution.

Hawley also claimed that the demonstrators “terrorized neighbors.” The video shows no attempts by the group to approach other homes in the neighborhood. The only “neighbor” visible is an unidentified white man not wearing a mask despite repeated public health notices to do so to mitigate the spread of the COVID-19 pandemic: 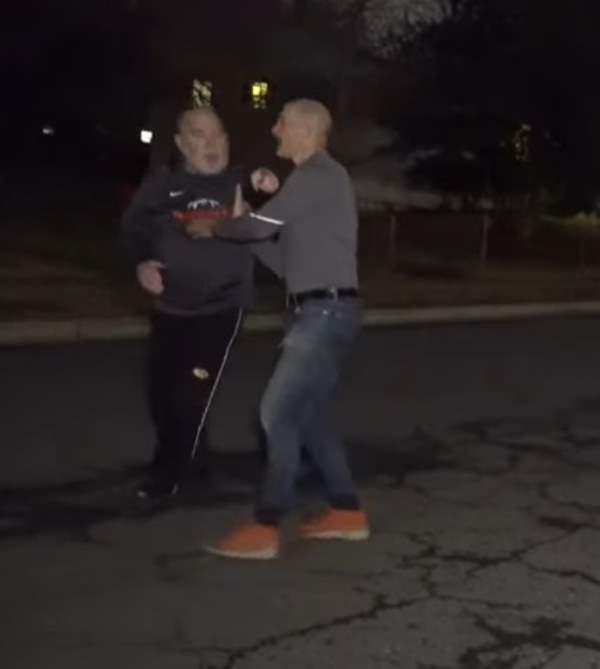 “We visited Senator Hawley’s house for around 30 minutes,” the group later posted. “We sang songs, chanted and shared our stories. A small group of people delivered a copy of the constitution to his door (with Article II, Section 1 of the Constitution dog eared for easy reference).”

The fact that Hawley’s claims were hollow (at best) went unmentioned by the Washington Post and other news organizations promoting the story, with several using headlines hinging on Hawley’s “Antifa scumbags” insult:

Hawley’s allegation that his family was victimized was further debunked by local police. According to the Kansas City Star:

Officer Juan Vazquez, a spokesman for the Vienna police, said officers responded to the scene and informed the demonstrators they were committing three violations. The activists left eight minutes later without incident or any arrests.

“It was a minor event,” Vazquez said. “Basically we got a call saying there was some sort of protest in front of a residence in our town … The group was maybe 15 to 20 people.”

Vazquez said Virginia law prohibits protests outside of a private residence. The group also violated ordinances that limit noise and bar writing in chalk on a public sidewalk, which will require municipal workers to clean up.

While he lives in Virginia — again, not in Washington D.C. as he claimed — the Star reported that Hawley listed his sister’s home address in Ozark, Missouri as his own in order to vote in the November 2020 presidential election. A spokesperson for the senator said he was “staying with family” while construction was underway on a new property his family owned in the same city. But according to the Star:

Hawley’s office did not answer questions about whether the senator is paying his sister’s rent, how many nights he has stayed at the Ozark property or his decision to use the address for his voter registration. Nor did the office offer a timetable for completion of Hawley’s new Christian County home.

In late December 2020, Hawley announced that he would object to the congressional certification of President-Elect Joe Biden’s victory in the Electoral College in that presidential election.

“At the very least, Congress should investigate allegations of voter fraud and adopt measures to secure the integrity of our elections,” Hawley claimed. “But Congress has so far failed to act.”

The senator’s remarks ignored the fact that 90 legal challenges to Biden’s win have been rejected in courts throughout the United States. While at least ten other GOP senators have signaled their intent to object alongside Hawley, Politico reported that at least 21 of his fellow Republicans will vote to certify the new president-elect, ensuring that the effort to illegally reverse the election in favor of Trump will fail.