Voting machines in Georgia's runoff elections were "malfunctioning" on January 5 2021.

That post was not reporting per se, but rather aggregating content from a local radio show. Host John Fredericks’ name was misspelled throughout the piece, which consisted entirely of rumors and hearsay:

On Tuesday [January 5 2021], radio show host John Fredricks stated that multiple voters in Georgia had called into his show to tell him that they were unable to cast their votes in the Georgia runoff election because they were told the voting machines were malfunctioning.

The callers claimed the poll workers told them to put their ballots in a box and they would be scanned later in the day. Keep in mind the malfunctions were reportedly in deep red counties.

The comments from Fredricks came during an interview with Steve Bannon on War Room Pandemic.

“Dominion machines in… 3 of the largest Republican precincts…are down…They are told they can’t scan their ballots because the machines don’t work…The pole workers are saying ‘When it’s fixed we’ll scan it for you’…There’s all kinds of red flags,” said Fredricks.

Fredericks’ radio show wasn’t the sole source for the site’s claims, a handful of tweets repeating them were also embedded:

This is the poll place pic.twitter.com/PONXvYkHVP

Notably, those spreading the claims also appear to have an existing track record of being heavily invested in election disinformation — for example, the account above tagged Ron Watkins/@CodeMonkeyZ, who has been absolutely instrumental in the spread of previous, viral election conspiracies, such as a claim that Executive Order 13848 would overturn President-Elect Joe Biden’s win (it didn’t), or that Dominion Voting Systems was affected in the SolarWinds exploit (it wasn’t). 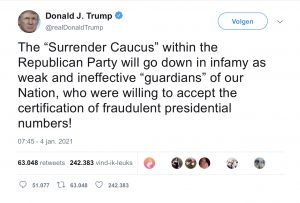 On January 5 2021, Trump reiterated the rumor that Dominion voting machines in Georgia’s “Republican Strongholds” were malfunctioning, and as a result, ballots were instead placed in “lock boxes”: 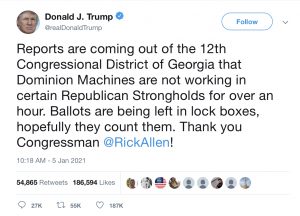 The claims in Trump’s tweet were addressed by Gabriel Sterling, a Georgia election official and a self-described conservative who has repeatedly intervened to correct disinformation during and after the November 2020 general election and into the January 5 2021 runoffs. Less than half an hour after Trump sent the above tweet, Sterling retweeted it and explained:

And this issue in Columbia Co. was resolved hours ago and our office informed the public about it in real time. The votes of everyone will be protected and counted. Sorry you received old intel Mr. President. https://t.co/qqGmnIqwsM

At 8:28 AM Eastern time on January 5 2021, Sterling addressed “some issues” in one county, and described the measures implemented to ensure that the Georgia runoffs continued smoothly:

Some issues in Columbia Co. There was a programming error on security keys for some locations scanners & pollworker cards. Voting continues on backup emergency ballots. Newly programmed keys&cards are being taken to locations via law enforcement.

On January 4 2021, Georgia Public Broadcasting (GPB) reported on a press conference during which Sterling again attempted to debunk false claims about Georgia’s elections:

But because of Trump’s continued effort to amplify misinformation about the election, Sterling has spent much of the past two months having to combat accusations about things such as the scanning of ballots multiple times and the tampering of voting equipment.

More than a month ago [as of January 2021], Sterling warned that “someone’s going to get shot” due to the Trump-inflamed conspiracy theories. Those unfounded theories have continued online and in far-right circles as Tuesday [January 5 2021]’s runoff elections in the state approach. Those races will decide which party controls the U.S. Senate.

“It’s whack-a-mole again,” Sterling said [on January 4 2021], speaking in front of a poster that had many of the debunked claims Trump mentioned. “It’s Groundhog Day again.”

Georgia Public Broadcasting emphasized that Sterling is a Republican, adding that he has voiced concerns that voters would “suppress their own votes” if they lost faith in the integrity of democratic elections:

“Given the nature of the president’s statements … we are specifically asking and telling you to turn out and vote tomorrow [January 5 2021],” Sterling said. “Do not self-suppress your own vote.”

Georgia Secretary of State staff about to hold a press conference refuting 1 by 1 the claims President Trump made on the call with @GaSecofState pic.twitter.com/dFOehpxula

A dubious website called TrendingPolitics.com and outgoing U.S. President Donald Trump each shared rumors that Dominion machines were “malfunctioning” in “deep red” counties in Georgia during the January 5 2021 runoff elections. Sterling — a self-described conservative and Republican — addressed Trump’s claim, explaining the problem was resolved early in the day. Sterling tweeted about a problem before 9 AM on the day of the runoff elections, and at the time Trump reiterated the rumor, Sterling affirmed the issue had been resolved hours before. Sterling described the claim as “old intel.”