"Democrats spent $40,000,000 of YOUR tax dollars trying to impeach Trump. Not one cent to benefit citizens!"

Democrats spent $40,000,000 of YOUR tax dollars trying to impeach Trump. Not one cent to benefit citizens! Are you pissed yet?

The status update was of the sort commonly used to spread mis-and-disinformation on Facebook. In that format, users have few characters with which to work and rarely append any links supporting their claim. Posts in that form are visually appealing, and spread onwards as direct shares or in screenshot form.

Initial attempts to find the source of the $40,000,000 impeachment cost cited led to a slew of Facebook posts making the same claim verbatim:

Those posts had share counts of 75,000 and 120,000 respectively, and also lacked any sort of citation. Additional research showed what appeared to be a coordinated messaging effort on someone’s part, based on what immediately surfaced in attempts to validate the claim.

On Twitter, hundreds of accounts also shared the exact same phrase repeatedly, down to the “not one cent to benefit citizens” and “are you pissed yet?” codas: 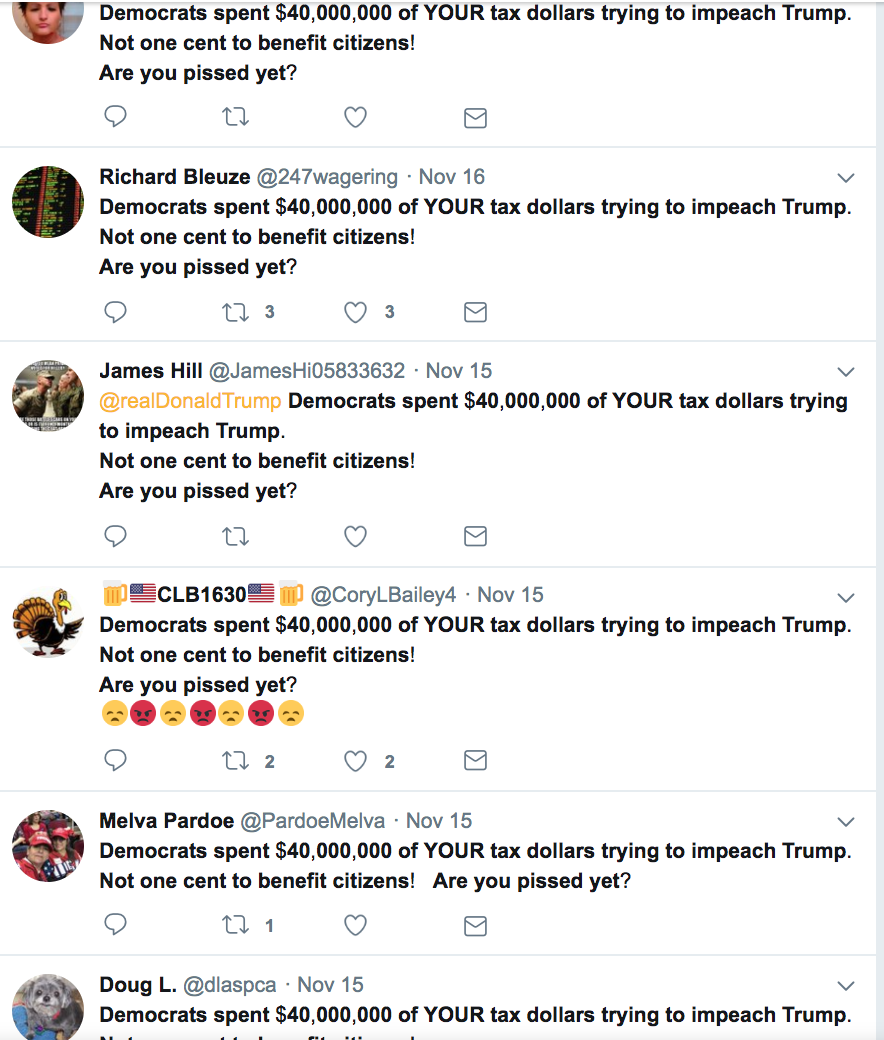 Democrats spent $40,000,000 of YOUR tax dollars trying to impeach Trump.
Not one cent to benefit citizens!
Are you pissed yet? @realDonaldTrump

A $40,000,000 figure cited in the myriad Facebook posts and tweets appears to have been plucked out of thin air. In instances where news reports discussed the “cost of impeachment,” it tended to be in a more figurative way. A June 2017 Harvard Political Review piece titled “The Cost of Impeachment” illustrated the theoretical price tag on such efforts:

Trump’s impeachment, however, would not come without a cost, even to those who have long dreamt of it. When Trump comes under fire, he almost instinctively denounces the credibility of his accusers. And when he dismisses criticism in the media as “fake news,” his supporters often believe him. Unless Trump’s loyal supporters believe the newest allegations against the president, impeachment may appear to them as nothing more than an establishment scheme to eliminate the leader who dared to disrupt the status quo in Washington.

Although those seeking more information about the claim would certainly find variations of it wallpapered across numerous social media platforms, what they were unlikely to find was any proof or evidence from any journalistic source reporting that Democrats (or anyone) had spent $40,000,000 (or any other amount of money) to impeach U.S. President Donald Trump.

PolitiFact examined the claim, similarly turning up empty-handed. According to PolitiFact, no estimated cost for impeachment could be found anywhere:

No estimate for the inquiry’s cost
Tax policy experts told us they aren’t sure how much the impeachment inquiry has cost since Speaker Nancy Pelosi announced it Sept. 24 [2019].

“I can’t think of anyone who’s tried to calculate this cost,” said Matt Gardner, a senior fellow at the Institute on Taxation and Economic Policy, in an email.

We asked the House Intelligence Committee, which is leading the investigation, for an estimate of how much it has spent on the impeachment inquiry. We did not hear back.

A conflation of two likely precursors seemed to be the culprit for what became a coordinated messaging effort. On October 4 2019, an effort by the rebranded “satirical” Last Line of Defense constellation of sites (PotatriotsUnite.com) claimed:

Freedom isn’t free, the saying goes. And neither is the opposite of freedom, which for today’s purpose, is the impeachment of President Donald Trump. Counting legal fees for a slew of legal teams, experts, time, maintenance, and constant deliveries of Chardonnay, you and I, Mr. and Mrs. Taxpayer, are looking at about 2 and a half billion dollars. Hope your boss can give you a raise.

Speaker of the House Pelosi isn’t too keen on having that number creep out into the public eye, so yesterday, as evidenced by the filing of re-appropriation form 77-A in the Congressional Budget office, she quickly moved the amount from the Department of Social Security to cover the cost. Are you retired? Well get ready to pay, bitch.

“Taters” are the conservative fans of America’s Last Line of Defense. They are fragile, frightened, mostly older caucasian Americans. They believe nearly anything. While we go out of our way to educate them that not everything they agree with is true, they are still old, typically ignorant, and again — very afraid of everything. Our mission is to do our best to show them the light, through shame if necessary, and to have a good time doing it, because…old and afraid or not, these people are responsible for the patriarchy we’re railing so hard against.

However, the $2.4 billion number cited differed from the one in the “not a cent to benefit citizens … are you pissed?” version.

That figure may have originated with a widely-aggregated January 2019 Associated Press article, headlined “Billionaire committing $40 million to impeach Trump.” It reported a “billionaire Democratic activist” — Tom Steyer, who has since announced his run for president — pledged the specific sum of $40 million on a campaign to call for Trump’s impeachment in 2019.

Steyer’s $40 million pledge was not intended to fund the cost of impeachment itself, merely to essentially advertise impeachment:

DES MOINES, Iowa (AP) — Billionaire investor and Democratic activist Tom Steyer said [in January 2019] that he will not run for the White House in 2020 and will instead focus on calling for President Donald Trump’s impeachment.

Steyer, who has spent $50 million on his Need to Impeach campaign and announced plans to spend $40 million more this year, said at an event in Des Moines that “the impeachment question has reached an inflection point,” given that Democrats have taken majority control of the House.

“I said last year that I’m willing to do whatever I can to protect our country from this reckless, lawless and dangerous president,” Steyer said. “Therefore, I will be dedicating 100 percent of my time, effort and resources working for Mr. Trump’s impeachment and removal from office. I am not running for president at this time.”

A claim “Democrats spent $40,000,000 of YOUR tax dollars trying to impeach Trump,” not “one cent to benefit citizens … are you pissed yet?” appeared very much like a coordinated messaging campaign, based on the number of unchanged shares of that phrase to Twitter and Facebook. Individual shares themselves were reposted tens of thousands of times. No official (or unofficial) cost estimate was available to fact-checkers in October or November 2019, much less reposters. It was quite possible the messaging combined a “satirical” story shared as real news and earlier news about Steyer, but the figure could just as well have been simply made up.