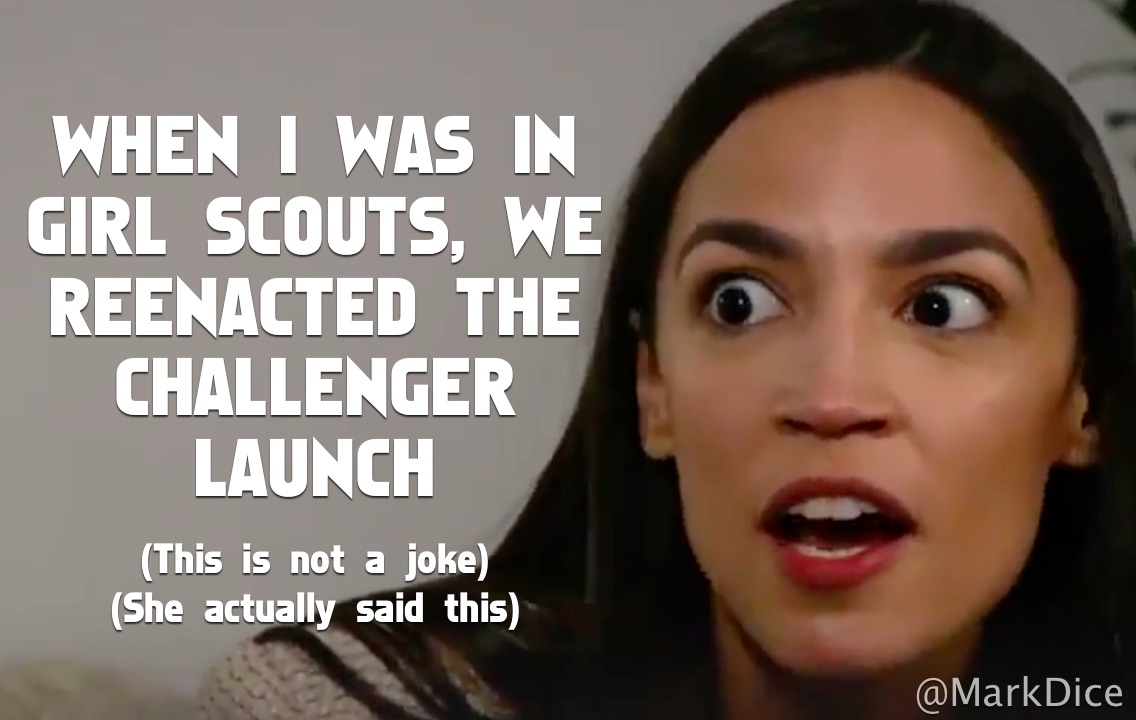 First, Dice tweeted the image above with no context, in which a photograph of Ocasio-Cortez was the following text:

WHEN I WAS IN GIRL SCOUTS, WE REENACTED THE CHALLENGER LAUNCH

(This is not a joke)
(She actually said this)

An hour later, Dice tweeted “I’m serious, here’s her tweet” with a link to a tweet shared by @AOC. Dice continued tweeting in the thread, adding:

She wasn’t even born until a few years AFTER the Challenger launch/disaster. She was probably talking about the Columbia shuttle. There is no end to her stupidity.

She even put a 🚀 emoji in her tweet. She is the DUMBEST PERSON ON THE PLANET.

Dice apparently took issue with Ocasio-Cortez’s mention of the January 1986 NASA Challenger disaster, during which the space shuttle unexpectedly broke up on launch just over a minute into its flight. All seven of the shuttle’s crew members on board —including a civilian schoolteacher — were killed:

The last member of the crew was Sharon Christa McAuliffe, the first teacher to fly in space. Selected from among more than 11,000 applicants from the education profession for entrance into the astronaut ranks, McAuliffe had been born on September 2, 1948, the oldest child of Edward and Grace Corrigan. Her father was at that time completing his sophomore year at Boston College, but not long thereafter he took a job as an assistant comptroller in a Boston department store and the family moved to the Boston suburb of Framingham. As a youth she registered excitement over the Apollo moon landing program, and wrote years later on her astronaut application form that “I watched the Space Age being born and I would like to participate.”

McAuliffe attended Framingham State College in her hometown, graduating in 1970. A few weeks later she married her longstanding boyfriend, Steven McAuliffe, and they moved to the Washington, DC, metropolitan area so Steven could attend Georgetown Law School. She took a job teaching in the secondary schools, specializing in American history and social studies. They stayed in the Washington area for the next eight years, she teaching and completing an M.A. from Bowie State University, in Maryland. They moved to Concord, New Hampshire, in 1978 when Steven accepted a job as an assistant to the state attorney general. Christa took a teaching post at Concord High School in 1982, and in 1984 learned about NASA’s efforts to locate an educator to fly on the Shuttle. The intent was to find a gifted teacher who could communicate with students from space.

NASA selected McAuliffe for this position in the summer of 1984 and in the fall she took a year-long leave of absence from teaching, during which time NASA would pay her salary, and trained for an early 1986 Shuttle mission. She had an immediate rapport with the media, and the teacher in space program received tremendous popular attention as a result. It is in part because of the excitement over McAuliffe’s presence on the Challenger that the accident had such a significant impact on the nation.

Ocasio-Cortez was born in 1989, three years after the tragedy.

In February 1986, the popular children’s television show Punky Brewster rushed an episode to air to address an event witnessed live by roughly half of America’s schoolchildren as it unfolded. At the time, popular media intended for children did not shy away from the disaster, instead consulting child psychology experts to formulate methods to soothe their fears and also to not depress interest in the space program. The idea was conceived after a young Soleil Moon Frye expressed trepidation about becoming an astronaut following the disaster:

The purpose of the show, [writer David W. Duclon] explained in an interview [in February 1986], is to help the young viewers who are its principal audience deal with the feelings that the disaster may have engendered, and to encourage those who are interested in the space program to continue pursuing their goals.

The character of Punky, who has expressed interest in becoming an astronaut several times in the past, gets this advice in the episode from former astronaut Edwin (Buzz) Aldrin, who appears as himself. He tells her about the risks that all explorers take and plugs the Young Astronauts Program, with which he has been involved since its inception … What he would like children to come away from the show with, Aldrin said, is a feeling that “there are joyful moments in everyone’s life and there are sad moments in everyone’s life. We must pay attention to each of those and . . . step out into the future with bright-eyed optimism.”

Duclon said that the idea for the “Punky Brewster” episode began forming the night of the Jan. 28 [1986] disaster, as he watched television coverage and saw the attention that was paid to how children might be affected by having witnessed the tragedy. Then he heard the following day that Soleil Moon Frye, who stars in the show and, like her character, talked of becoming an astronaut, had said she wasn’t so sure she wanted to be one anymore…. Working with the advice of several child psychologists, Duclon said, he constructed a story that begins with Punky writing in her diary about what she’s learned from the space shuttle accident. Then, through flashbacks, the audience sees how she came to learn those things — starting several days before the fateful liftoff and then skipping ahead to that afternoon, when Punky comes home from school to talk about it with Henry (George Gaynes), her foster father. She and her young schoolmates discuss it further the next day with their teacher.

Dice then linked to Ocasio-Cortez’s March 8 2019 tweet, which was (unsurprisingly) misleadingly paraphrased in the meme he shared:

[email protected] is how I first practiced how to change brake fluid, start a fire, practice self-defense, recreate the NASA Challenger mission, and v importantly: learn to teach myself new skills + navigate ambiguity. 🚀

There’s a reason a large of Congresswomen are former scouts!

Dice seized upon the “recreate the NASA Challenger mission” portion, suggesting that Ocasio-Cortez being born after the disaster indicated that she was confused by the mission she claimed to have learned about in the program.

In the meme, Dice’s paraphrase said “we reenacted the Challenger launch.” In Ocasio-Cortez’s tweet, she said recreated the NASA Challenger mission. Most people were aware that the Challenger launch was a tragic event, but Dice did not use the original “mission” phrasing — making it look as though she had said that her troop re-enacted a fatal, well-known shuttle launch.

Following the space shuttle disaster, relatives of the Challenger astronauts founded the Challenger Center for Space Science Education. As of 2019, there are dozens of regional Challenger Learning Centers.

Via the Challenger Center’s Facebook page, a listing of 2019 summer programs was shared in March 2019 (and archived here). That compendium of programs frequently listed programs for children of all ages that repeatedly included “activities including simulated space missions.” As its namesake was the Challenger mission, it was not hard to imagine that the centers “recreate the NASA Challenger mission.” (Not, we must point out here, “the launch.”)

On the Center’s website, simulated past missions are listed as a primary activity:

Center Missions are STEM experiences designed for middle school students and available at Challenger Learning Centers around the globe. The space-themed simulation-based experiences are led by trained Flight Directors and take place in a fully immersive Space Station and Mission Control.

At least one Challenger Center, this one in Bridgeport, Connecticut, features “an immersive mock space station and mission control simulation experience that promotes teamwork and critical thinking skills,” in what it describes as a “Challenger mission.” The Center’s name includes “Challenger,” and simulated missions are a regular occurrence. But do any Girl Scouts or other school children “recreate the Challenger mission”? According to a 2014-2015 Girl Scouts magazine, the Centers do offer Challenger mission programs. One (of many) program’s name is “Discovery Challenger Mission,” and its description involved a mission to simulate a future Challenger voyage to establish a moon base: 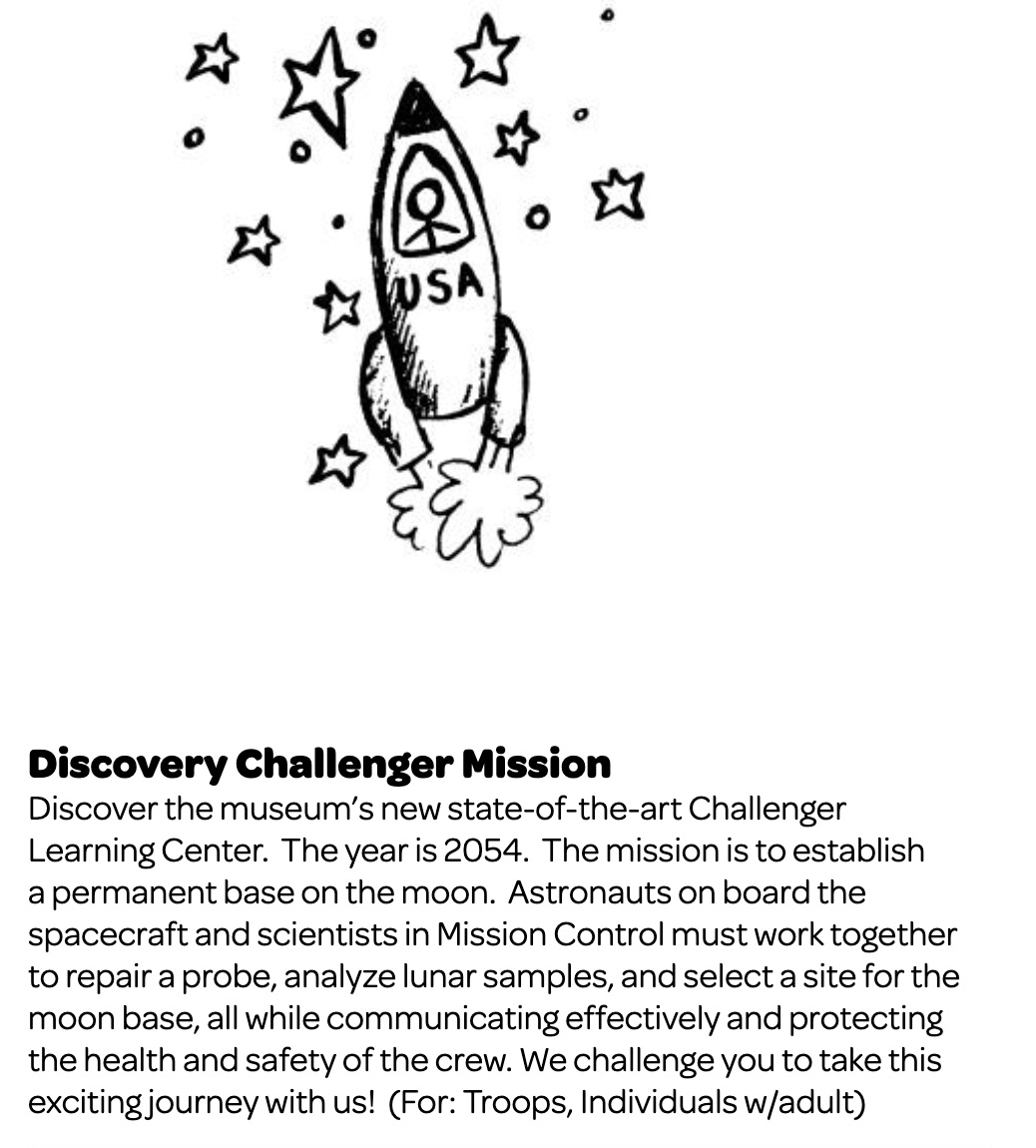 Alexandria Ocasio-Cortez said that as a Girl Scout, her troop “recreated the NASA Challenger mission.” Dice paraphrased her, replacing “mission” with “launch” and “recreated” with “reenacted.” Dice appeared to be unaware of the many operating Challenger Centers in the United States, or that Girl Scouts frequently visit them and offer programs in partnership with them. Further, at least one particular program offered to Girl Scouts was called the “Discovery Challenger Mission” (not “launch”) — indicating that the Challenger Center, which was founded in 1986, does not shy away from honoring its namesake voyage.