Jim Acosta "accosted" or "assaulted" a woman who tried to take his microphone as he was asking a question of United States President Donald Trump.

The morning after a hotly-contested midterm election resulted in Republicans resoundingly losing control of the House, United States President Donald Trump held a press conference to discuss the results and take questions from journalists.

In the middle of the event, CNN reporter Jim Acosta stood to ask questions of Trump, including one about the ongoing investigation into Russian interference in the 2016 U.S. presidential election. A visibly agitated Trump insulted him, then cut him off:

…Acosta asked about Trump’s claim that a caravan of migrants posed a threat to the country, but then persisted in trying to ask another about the Russia investigation.

“That’s enough,” Trump said, several times, as he called on Alexander. A White House staffer attempted to grab the microphone from Acosta, but he persisted.

“Are you worried about indictments coming down in this investigation?” Acosta asked.

Trump, visibly angry, then walked away from the lectern and then looked at Acosta and said, “I’ll tell you what. CNN should be ashamed of itself having you working for them. You are a rude, terrible person. You shouldn’t be working for CNN.”

This exchange quickly morphed into claims and rumors that Acosta had attempted to “assault” the woman tasked with grabbing his microphone, which was quickly picked up by the usual bots and trolls on social media trying to push it into the mainstream narrative: 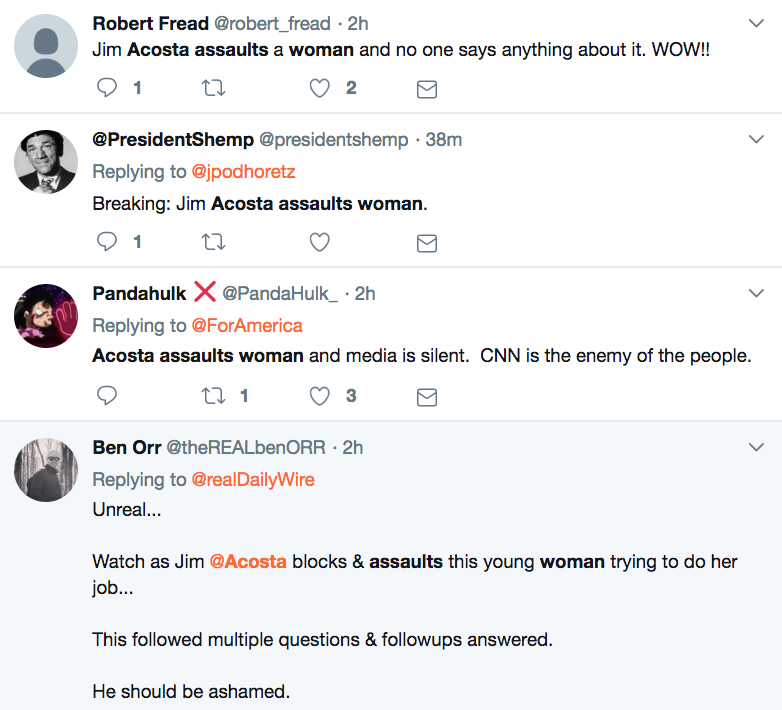 However, multiple videos clearly show what actually happened. A woman walked over to Acosta and tried to pull it from his grip as he says, “Pardon me, ma’am.” At that point, she relinquishes the microphone and sits back down:

BREAKING: White House aide grabs and tries to physically remove a microphone from CNN Correspondent Jim Acosta during a contentious exchange with President Trump at a news conference. pic.twitter.com/fFm7wclFw2

A photograph from another angle makes it even clearer:

@realDonaldTrump looks on as a White House aide attempts to take away a microphone from CNN’s @Acosta during a news conference. pic.twitter.com/hKehies5Zh

Eventually, the White House employee grabbed the microphone and walked away, at which point Trump insulted Acosta:

Pres. Trump to CNN’s Jim Acosta, after WH aide strips him of microphone: “CNN should be ashamed of itself having you working for them. You are a rude, terrible person. You shouldn’t be working for CNN.” https://t.co/ov63X55UM0 pic.twitter.com/5G0eALHUbM

At no point did the reporter assault her, as these multiple videos and photographs make clear. This rumor is completely false.

CNN also issued a statement about the press conference. “This President’s ongoing attacks on the press have gone too far,” the network said, calling the attacks not only dangerous, but “disturbingly un-American”:

While President Trump has made it clear he does not respect a free press, he has a sworn obligation to protect it. A free press is vital to democracy, and we stand behind Jim Acosta and his fellow journalists everywhere.

CNN and reporter Jim Acosta have been frequent targets of Trump and his administration due to his frequent questions about ongoing investigations into possible criminal activities and public criticism of Trump’s near-daily attacks on the press.

Later that day, the White House shared a video purporting to be “proof” that Acosta “karate chopped” the woman trying to yank the microphone out of his hand, using the video as justification for pulling his press credentials. The Washington Post reports that the video was misleadingly edited and appears to have originated from the disreputable conspiracy site InfoWars:

﻿Further, legal definitions of assault vary from state to state, but the federal definition of simple assault is quite specific:

Absent a statutory definition of assault, the courts have looked to the common law and have concluded that an “assault” is:

An attempt with force or violence to do a corporal injury to another; may consist of any act tending to such corporal injury, accompanied with such circumstances as denotes at the time an intention, coupled with present ability, of using actual violence against the person.

On November 9th, Trump said he stands by the video:

Trump said “nobody manipulated” a video distributed by White House press secretary Sarah Sanders that showed Acosta resisting an intern’s attempt to take a microphone from him during a news conference on Friday. A video expert had told The Associated Press that the video appeared doctored to speed up Acosta’s arm movement and make his gesture more threatening; the White House used that encounter to justify pulling Acosta’s credentials.

“It wasn’t doctored,” the president said. “They gave a close-up view. That’s not doctoring.”

He added that other reporters may soon be stripped of their White House press passes just as Jim Acosta was.

On November 13th, CNN filed a lawsuit against the Trump administration for taking away Acosta’s pass. The White House said CNN was “grandstanding” in response.

However, on November 16th, a judge ruled in CNN’s and Jim Acosta’s favor, ordering the White House to reinstate his press pass immediately.