Dr. Martin Luther King, Jr. spoke against abortion in a comment alluding to his "I Have a Dream" speech.

In January 2019, Martin Luther King, Jr. Day and the passage of a new abortion law in New York state occurred in close proximity, facilitating the circulation of the following quote meme: 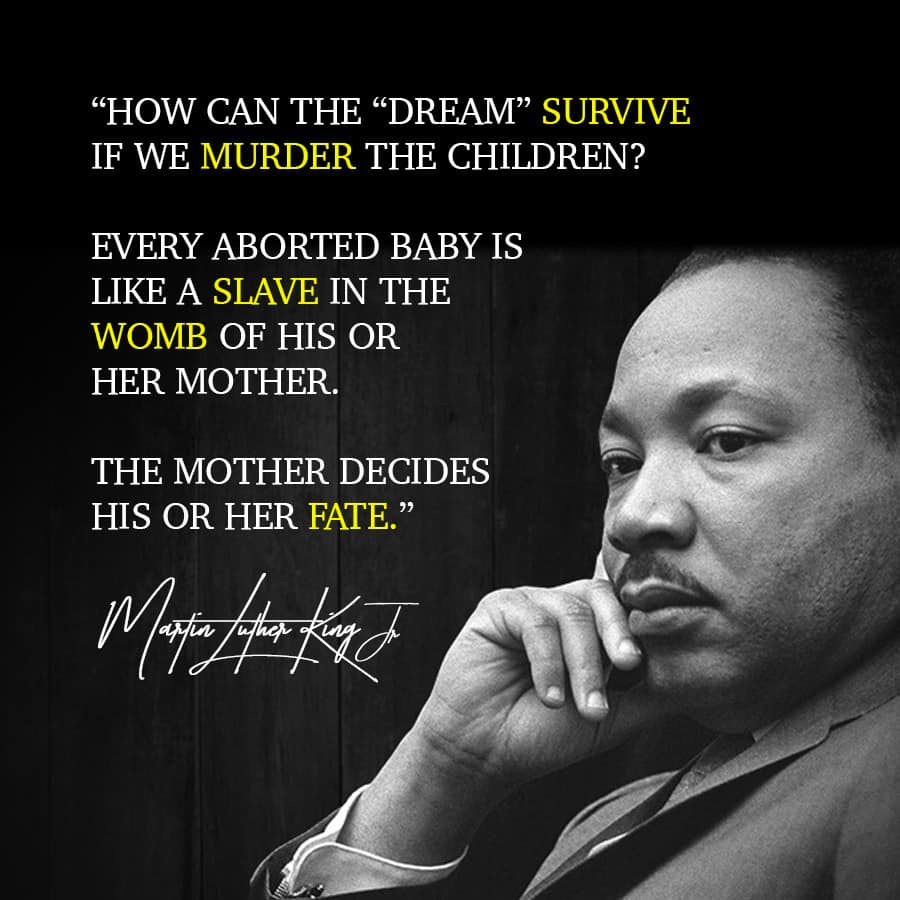 The above-reproduced quote meme included a photograph of King and the following quote:

“HOW CAN THE ‘DREAM’ SURVIVE IF WE MURDER THE CHILDREN?

EVERY ABORTED BABY IS LIKE A SLAVE IN THE WOMB OF HIS OR HER MOTHER.

THE MOTHER DECIDES HIS OR HER FATE.”

Although what appeared to be King’s signature was part of the meme, it lacked any references to a specific speech, interview, or other commentary he made.

The suggestion that King voiced opinions on the morality or legality of abortion was chronologically iffy, as the debate over the practice didn’t really get into full swing in the late 1960s and early 1970s; the National Right to Life Committee was established in 1973.

We were unable to locate any specific position Dr. King took on the matter of abortion. But in 1966, Planned Parenthood Federation of America (PPFA) awarded Dr. King the PPFA Margaret Sanger Award — “given annually to individuals of distinction in recognition of excellence and leadership in furthering reproductive health and reproductive rights.” A page on Planned Parenthood’s site notes that Coretta Scott King delivered an acceptance speech attributed to her husband:

Dr. King’s award was presented on May 5, 1966. The citation read “This award is presented to the Reverend Martin Luther King Jr., for his courageous resistance to bigotry and his lifelong dedication to the advancement of social justice and human dignity.

“Facing jail, abuse and physical danger, Dr. King’s unceasing efforts – in behalf of all Americans – to win freedom for the Negro people parallel closely Mrs. Sanger’s fight over the last half-century for the emancipation of women from the burdens of perpetual child-bearing and the emancipation of children from a future of poverty and hopelessness. Neither Mrs. Sanger nor Dr. King has hesitated to challenge unjust laws, cruel social customs and blind prejudice that hold people in ignorance and degradation. Our courts, our legislatures and – most of all – the human heart and mind have been the crucible in which they have forged a nobler history for all mankind.

“In the tradition of all great humanitarians who have seen that human life and progress are indeed indivisible, Dr. King has lent his eloquent voice to the cause of world-wide voluntary family planning.

“For Martin Luther King’s unique qualities of understanding, compassion and bravery, and for his wise and unwavering leadership in securing for all people their basic human right to knowledge, dignity and opportunity that are the fount and principle of Margaret Sanger’s life, this award is presented.”

The page also reproduced a letter sent from Dr. King to Cass Canfield, then chairman of the Executive Committee of the PPFA World Population Emergency Campaign:

Words are inadequate for me to say how honored I was to be the recipient of the Margaret Sanger Award. This award will remain among my most cherished possessions. While I cannot claim to be worthy of such a signal honor, I can assure you that I accept it with deep humility and sincere gratitude. Such a wonderful expression of support is of inestimable value for the continuance of my humble efforts.

Again let me say how much I regret that at the last minute urgent developments in the civil rights movement made it impossible for me to be in Washington to personally receive the award. My wife brought glowing echoes of the wonderful reception and impressiveness of the total occasion.

I am happy to be the recipient of the Margaret Sanger Award and I can assure you that this distinct honor will cause me to work even harder for a reign of justice and a rule of love all over our nation.

King’s words in 1966 were starkly at odds with the quote attributed to him in the meme.

But that quote was not fabricated — it just was not one uttered by Dr. King. Neither did it date to the late 1960s. In 2017, King’s niece Alveda King was quoted by anti-abortion site Live Action:

Decades after King gave his famous speech, his legacy lives on. Yet, his niece, Dr. Alveda King, is speaking out about why the fulfillment of King’s Dream remains under threat. In a piece written for Priests for Life, Alveda King penned her thoughts about why abortion is undermining her uncle’s Dream:

Oh, God, what would Martin Luther King, Jr., who dreamed of having his children judged by the content of their characters do if he’d lived to see the contents of thousands of children’s skulls emptied into the bottomless caverns of the abortionists pits?

…How can the “Dream” survive if we murder the children? Every aborted baby is like a slave in the womb of his or her mother. The mother decides his or her fate…If the Dream of Dr. Martin Luther King, Jr. is to live, our babies must live. Our mothers must choose life.

With respect to the New York law:

The [Reproductive Health Act] takes abortion out of the criminal code; the state will now regulate it as a matter of public health. It also expands the pool of medical professionals who are authorized to perform abortions and permits abortions after 24 weeks when the fetus is not viable or a woman’s health is at risk. Previously, women who needed later-term abortions to end nonviable pregnancies were forced to travel far outside the state — a financial and psychological burden.