More black Americans have been killed by undocumented immigrants than police officers in 2016, 2017, and 2018.

In January 2019, the following Facebook status update circulated with the claim that undocumented immigrants caused the deaths of more black Americans than officer involved shootings in years prior: 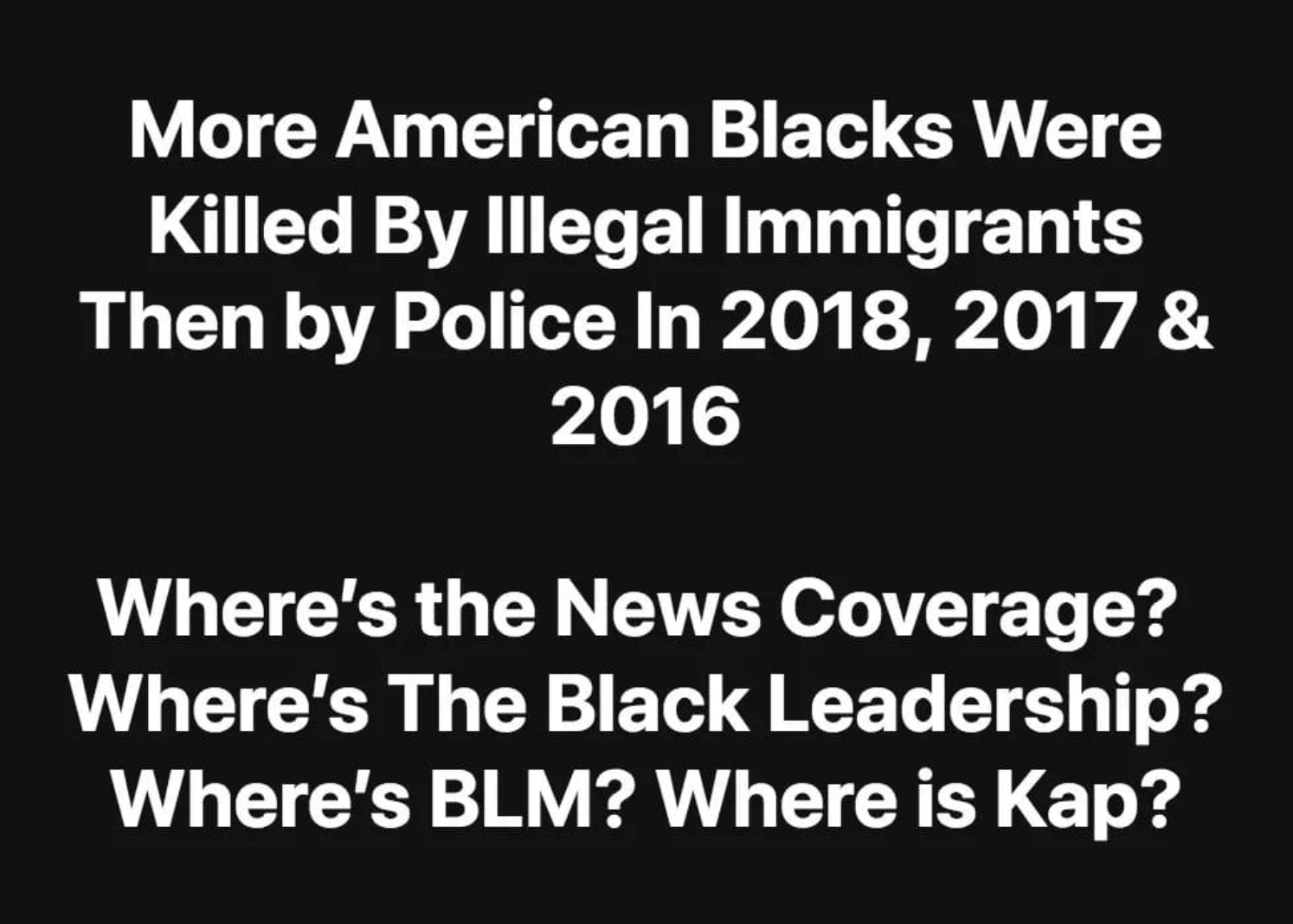 Where’s the News Coverage? Where’s The Black Leadership? Where’s BLM? Where is Kap?

In a relatively short space, the meme managed to touch on myriad hot-button political issues: Immigration, extrajudicial killings of black Americans by police officers, the media, “black leadership,” Black Lives Matter, and Colin Kaepernick. What it lacked in substance, it made up for in whataboutism.

As a unit of contrast, we arrived at a number that was by all accounts wildly inflated:

There is no basis whatsoever to assume the “63,000 since 2001” figure was based in anything at all, but if we apply King’s second formula (1.2 per day) to an annual basis, we get 438 deaths a year, which we can round up to 500 for comparison purposes.

Unsurprisingly, we were not the only fact-checking site attempting to chase down an elusive estimate for the number of Americans purportedly killed each year (intentionally or not) by undocumented immigrants. About two weeks after we published our own analysis, PolitiFact.com made a similar attempt to reach a baseline number for comparison, theirs based on extrapolation from estimates of the number of undocumented immigrants in the United States at any given moment combined with general crime data:

We know that there have recently been about 19,000 homicides every year in the United States, and presumably some fraction of them have been committed by undocumented immigrants.

That’s not far off another data point we have — the number of convictions of illegal immigrants for homicides in Texas … If you prorate Texas’s 39 homicide convictions to the country as a whole — simply using population — it works out to 445 nationally.

As we’ve emphasized, these are back-of-the-envelope calculations. But even if these estimates — a couple hundred homicides by undocumented immigrants — are high by a factor of 10, they almost certainly outpaced the five lettuce deaths in 2018.

As in our previous analysis, PolitiFact’s rough calculation was sufficient to contrast with the other statistic they examined — deaths of Americans in 2018 caused by lettuce.

Breaking statistics down, then down again (such as deaths at the hands of police, and then deaths for people of a specific ethnicity at the hands of police) often made for unreliable estimates. In 2018, The Atlantic examined research into the effects of such deaths. It touched on data from 2016 and 2017, two of the years mentioned in the meme:

Once again, arriving at a firm number for any of the three years mentioned was challenging, as no official database of deaths of civilians at the hands of police exists. More often than not, statistics are presented with an aggregate number of people killed by police in any given year alongside a percentage for black people.

While unofficial counts sometimes provided a baseline for perspective, research in 2017 also found that those data sets were actually undercounting incidents of police officer-involved deaths:

The federal government tries to track this subset of the population with databases like the National Vital Statistics System, which is based on death certificates. As public attention on police violence has increased in recent years, media organizations began making databases of their own—like the Guardian’s The Counted or the Washington Post’s Fatal Force — to track law enforcement-related deaths. Comparisons between the data sets suggested that the official government data was severely undercounting police-related deaths. However, no one really knew how accurate those media databases were either.

In 2015, the NVSS recorded 523 law enforcement-related deaths, while The Counted identified 1,086 such cases. There was significant overlap between the two sources, according to the new study; 487 cases appeared in both lists. From this data, the authors estimated that at least 1,166 people were killed by police in the U.S. in 2015. The news-based system counted over 93 percent of the deaths, while NVSS captured less than 45 percent … But incorporating news reports into official counts will almost certainly make a difference. “This approach that the Guardian and the Washington Post have taken of capturing these deaths based on local media reports is very good, it captures nearly all—93 percent—of the deaths,” Feldman says. “The Department of Justice actually adopted this methodology too.” In 2016, the DOJ unveiled a new system, modeled after The Counted, which requires police departments to report fatalities involving officers to the federal agency quarterly, which agency officials would use to confirm police-related deaths reported by the media. “But it’s not really clear under the new administration what’s happening with that,” Feldman says.

To recap, both numbers listed in the meme were based on estimates known to be unreliable. An August 2018 study published in the American Journal of Public Health arrived at some specific numbers, but reiterated that they remain severely underestimated:

“Using fairly comprehensive data to establish a careful account of where police homicides are happening, and who they’re happening to, was necessary for building foundations around this issue that’s been so central to the country for the past few years,” Esposito said.

By that estimate, we could calculate something approaching an average. The study measured 6,295 victims in total in a six-year period, 1,779 of whom were black. Dividing the number of fatalities by the number of years (roughly six) produces a figure — 296.5.

Going back to the number of Americans killed by undocumented immigrants each year, we estimated a high number of 438. PolitiFact arrived at a similar figure of 445, based on data about immigration and crime statistics. Both of those numbers referenced decedents of all races, not black people specifically.

To make an educated guess at the number of black people in particular who made up the 445 figure, the most intuitive thing to do would be apply the per capita percentage. According to census data, black people account for roughly 12 percent of the population of the United States (which is possibly an overestimate). Twelve percent of 445 is 53.4.

Through a series of acutely tortured data sets, we can therefore arrive at a broad estimate of how many black Americans are killed by police in any given year — 296.5. Similarly, we can deduce a number of black Americans killed by undocumented immigrants, 53.4. The meme is almost certainly completely false, but we are rating it Unproven thanks to the unreliability of the numbers involved and dearth of dependable data.