A forwarded email turned into a social media meme uses statistics to show the effects of undocumented immigration.

Immigration is a topic filled with disinformation and misinformation, which is often offered up in fact-free (but media-friendly) soundbites and their online corollary, memes. That they often contain no citation whatsoever is no hindrance to their spread.

One such enduring meme, which incidentally started out as a chain email at least a decade and a half before it came roaring back just in time for the immigration debate of the Trump administration, shows just how inaccurate such sources can be: 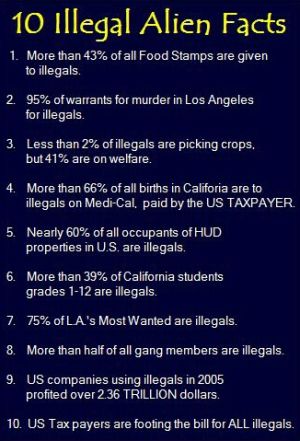 Immigration is a significant issue for Americans and deserves attention, but whoever authored this did not help their cause.  Most of the figures are either difficult to prove or don’t match known facts. Some seem to be completely fabricated. Some versions say the figures are from the Los Angeles Times, which is not true.  Others say they are statistics from the Federal Bureau of Investigation, which is not true either.

One of the challenges with this topic is that many undocumented immigrants live out of sight of many studies and surveys. Instead, the best figures about unauthorized immigration are mostly based on deductions from those who are either in professional positions working with immigrant issues or doing research on immigration.  None of the estimates should be considered the last word on unauthorized immigration, but all of the estimates dramatically contradict the assertions made in the meme.

Here is our research on each of the points of the email:

1. 40 percent of all workers in Los Angeles County are unauthorized?

Fiction. The Economic Roundtable issued a report in 2005 on what it called “L.A’s off-the-books labor force.”  Its research was about the city of Los Angeles, not the entire county; it concluded that there were 3,908,000 wage earners in the city and about 972,000 “informal workers,” meaning they were getting paid under the table.  It does not break down how many of them might have been unauthorized workers, but even considering every under-the-table worker, the percentage was nowhere near 40 percent.  The Los Angeles Almanac estimated that the number of “unreported jobs” in 2005 in Los Angeles County at 643,000 with a number of workers at 4,090.630.

2. 95 percent of warrants for murder in Los Angeles are for undocumented people?

Unproven. The only source we were able to find for this specious number is a report by Heather McDonald and published by the Center for Immigration Studies, an anti-immigration group that is not considered at all reliable.

Despite this, McDonald repeated her conclusions on April 13, 2005 in testimony before the House Judiciary Subcommittee on “Immigration, Border Security, and Claims” saying that 95 percent of all outstanding warrants for homicide in Los Angeles targeted undocumented immigrants.

There is no source or statistic for this number, which she said she received as a “rough estimate” from a lone police detective in 2005. Given that more than a decade has elapsed since this claim with no further proof that this number was anything but made up to begin with — and considering its source and that we have found absolutely no other numbers to back this shocking claim in Los Angeles County or anywhere else — we rate this Unproven.

However, it is almost certainly complete fiction.

3. 75 percent of people on the most wanted list in Los Angeles are undocumented?

Unproven. Another specious number that is most likely completely false. We could not find anything to substantiate this number. It appears to be entirely made up, but since we could find nothing to specifically disprove it either, we’re rating this one Unproven.

4. More than two-thirds of all births in Los Angeles County are to undocumented Mexicans on MediCal, whose births were paid for by taxpayers?

Fiction. Medi-Cal, California’s version of Medicaid, paid for a little more than half of all births in the state as of 2011, the most recent numbers we could find. As Medi-Cal exists to support low-income people amid skyrocketing living and healthcare costs and having a baby can be expensive, that figure makes sense. What does not make sense is the false statistic given in this claim.

5. Nearly 25 percent of all inmates in California detention centers are Mexican nationals in the United States without documentation?

Fiction. National statistics show this claim is simply not true. A 1993 report to the California Joint Committee on Prison Construction and Operations estimated that around 15 percent of the 116,000 state prison inmates were undocumented at that time. In 2018, the Cato Institute used census data to look at the numbers throughout the country, with a caveat:

We were unable to find updated statistics for California alone. However, given that study after study has shown that immigrants (authorized or not) commit violent crimes at a far lower rate than native-born Americans, and that California had an estimated population of 2.35 to 2.6 million undocumented immigrants living in the state as of 2014, we are comfortable extrapolating the data and rating this one Fiction.

6. More than 300,000 undocumented people in Los Angeles County are living in garages?

Fiction. This was just made up. We could not find anyone who kept statistics on garage-dwellers of any national origin, nor have we any idea how anyone could know those numbers. The estimated population of undocumented people in Los Angeles and Orange Counties, according to the Los Angeles Times, is about one million total. The idea that more than a quarter of the population of both those counties would then retire to garages in Los Angeles at the end of the day is a fever dream.

7. The FBI reports that half of all gang members in Los Angeles are most likely undocumented from south of the border?

Fiction. It is known that some gangs do include undocumented people as well as American citizens (including that reliable old bugbear MS-13, which originated in the Koreatown area of Los Angeles but was exported with stricter deportation policies; after that, it became a multinational gang.) Nowhere has the FBI reported this.

8. Nearly 60 percent of all occupants of HUD properties are undocumented?

Fiction. Housing and Urban Development requires proof of citizenship applying for public assistance and has for many years:

1. Assistance in subsidized housing is restricted to the following: a. U.S. citizens or nationals; and b. Noncitizens who have eligible immigration status.

2. All applicants for assistance must be given notice of the requirement to submit evidence of citizenship or eligible immigration status at the time of application. The entity responsible for receiving the documentation, where possible, must arrange to provide the notice in a language that is understood by the individual if the person is not proficient in English. (See Exhibits 3-3 and 3-4 for a sample notice and its accompanying Family Summary Sheet.)

3. All family members, regardless of age, must declare their citizenship or immigration status.

Families who are found to have undocumented members living in HUD properties receive a prorated rate of assistance. This claim appears to simply be made-up red meat for the “immigrants don’t contribute to the public at large” crowd.

Mostly fiction. This assertion does not provide further details or specifications, and thus it is meaningless. Do they mean only English? Only Spanish? Languages spoken at home? Languages used to salt phrases? Place names? It’s unclear, so we went with languages primarily spoken at home.

As we previously mentioned, there is a large contingent of Spanish speakers in California. This is largely due to its unique history and relative proximity to the Mexican border, Los Angeles County (thanks in large part to the Californios who settled in the region and their descendants) has the largest proportion of Spanish speakers of any American city:

Spanish was the first non-Native American language regularly spoken in Los Angeles and, in fact, was the first such language spoken in almost all of what would become the southwestern United States. Spanish has been regularly spoken in Los Angeles County since 1771 when Spanish missionaries established the Mission San Gabriel. Los Angeles did not get its first permanent English-speaker until 1818 when American merchant sailor Joseph Chapman was captured by Spanish authorities while raiding the California coast from an Argentine privateer. Chapman decided to stay in California and settle in Los Angeles.

11. Fewer than 2 percent of undocumented workers are picking crops, but 29 percent are on welfare?

Mostly fiction. A 2016 Department of Labor study of agricultural workers broke down the demographics, indicating that fewer than half of farm laborers are unauthorized:

Among citizens, 87 percent were born in the U.S. and 13 percent were naturalized citizens. On average, foreign-born farmworkers interviewed in 2013-2014 first came to the U.S. 18 years before being interviewed.

However, the claim falls apart with its welfare numbers, as undocumented immigrants are not eligible for most kinds of welfare programs except for elementary and high school education and emergency medical care.  Children born in the U.S. are citizens and qualify for certain public assistance, but as with the Housing and Urban Development claim, what is generally thought of as “welfare” is available only to citizens or authorized immigrants — and requires proof of immigration status to participate.

12. More than 70 percent of the United States’ annual population growth (and over 90 percent of California, Florida, and New York) comes from undocumented immigrants?

A related, more in-depth look at the numbers indicates that between 2009 and 2014, California’s undocumented population dropped by 190,000 and New York and Florida had changes so small as to be considered statistically insignificant.

This meme and all of its claims fail to make any sort of case for ending immigration, authorized or unauthorized. All it does prove — and, to be fair, it does do a good job of showing this — is that using chain emails or memes as sources in an incredibly complex and important public conversation does no one any favors at all. Given the sheer volume of errors and outright invented “facts” in this relatively short meme, we rate it Not True.