A viral image of a crowded beach in Jacksonville, Florida was not taken as beaches reopened in April 2020 -- it was an old, stock photograph.

Floridians didn’t waste any time getting back to the sun and surf when beaches and parks were reopened in Jacksonville — the same day the state clocked a record number of coronavirus cases.

Crowds were seen cheering and rushing the beach as police removed the barriers around 5 p.m. [April 17 2020], CNN reported.

Although that article featured a video when we accessed it, archived versions featured an image commonly associated with claims about “packed beaches” in Florida on and after April 17 2020: 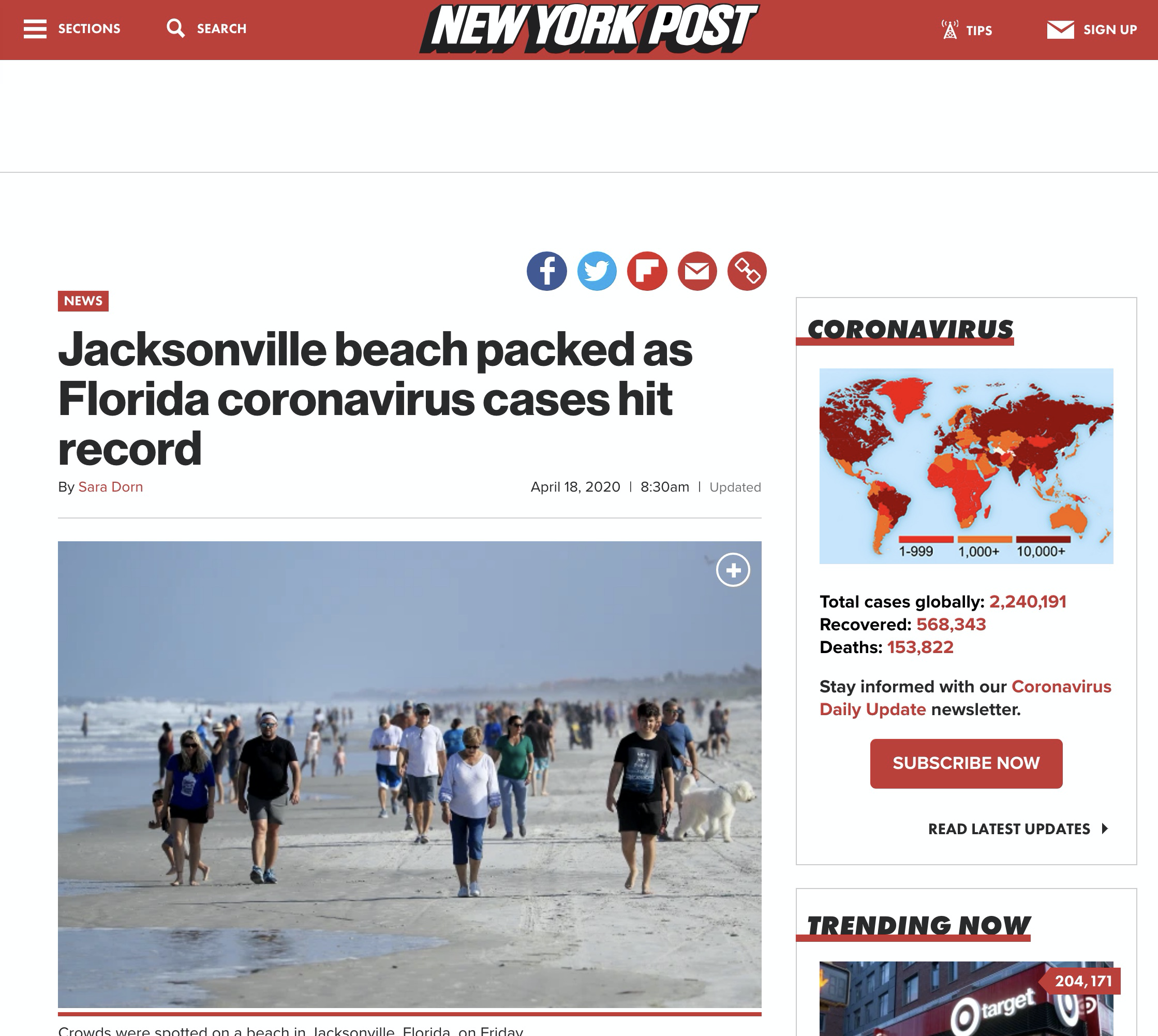 That particular image was a popular one to feature; The Daily Beast also chose it in an article published on April 18 2020: 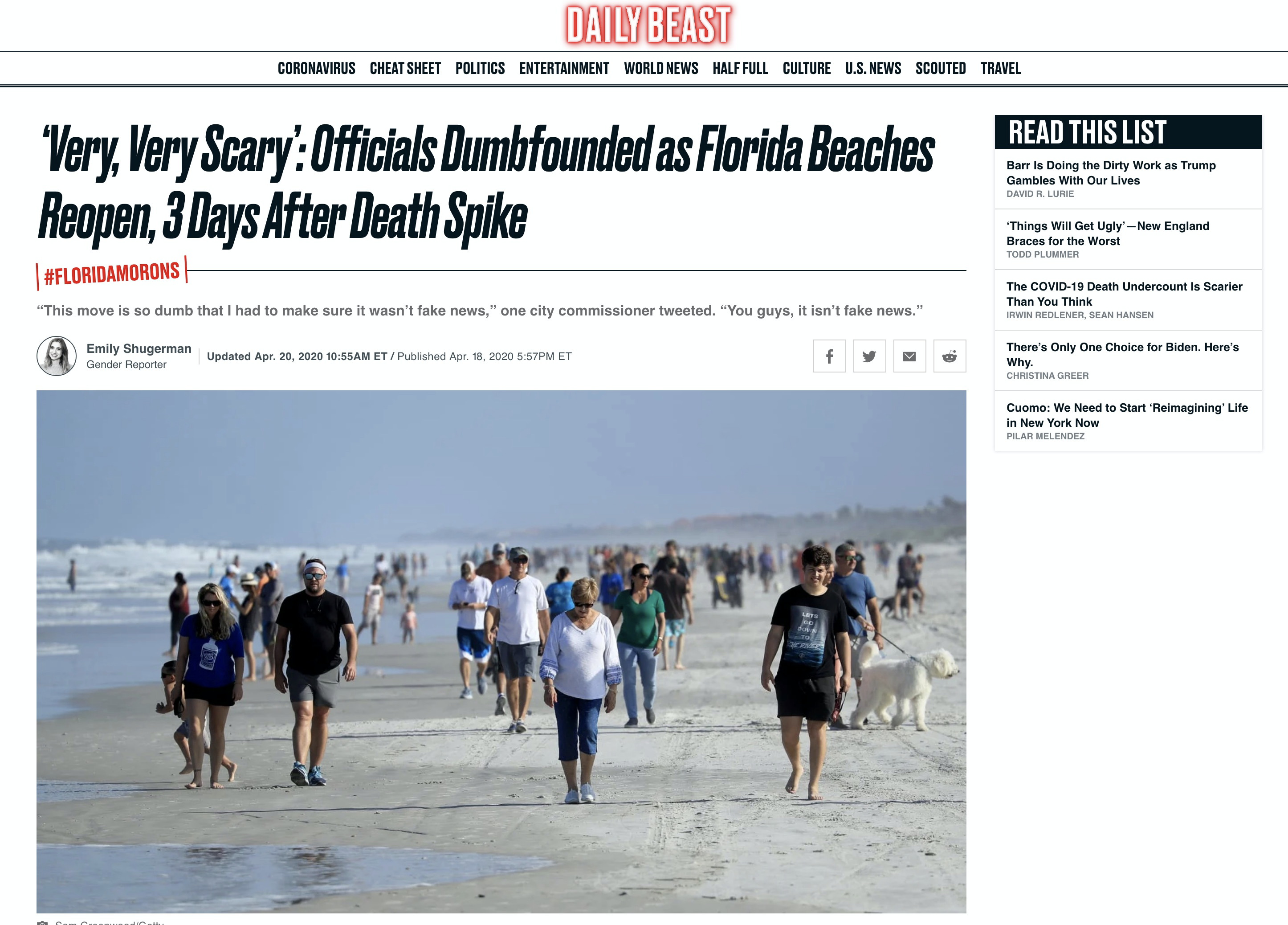 A paywalled April 18 2020 Washington Post piece (“#FloridaMorons trends after people flock to reopened Florida beaches”) featured video of a slightly less crowded beach, but highlighted the popularity of the hashtag #FloridaMorons as the image spread: 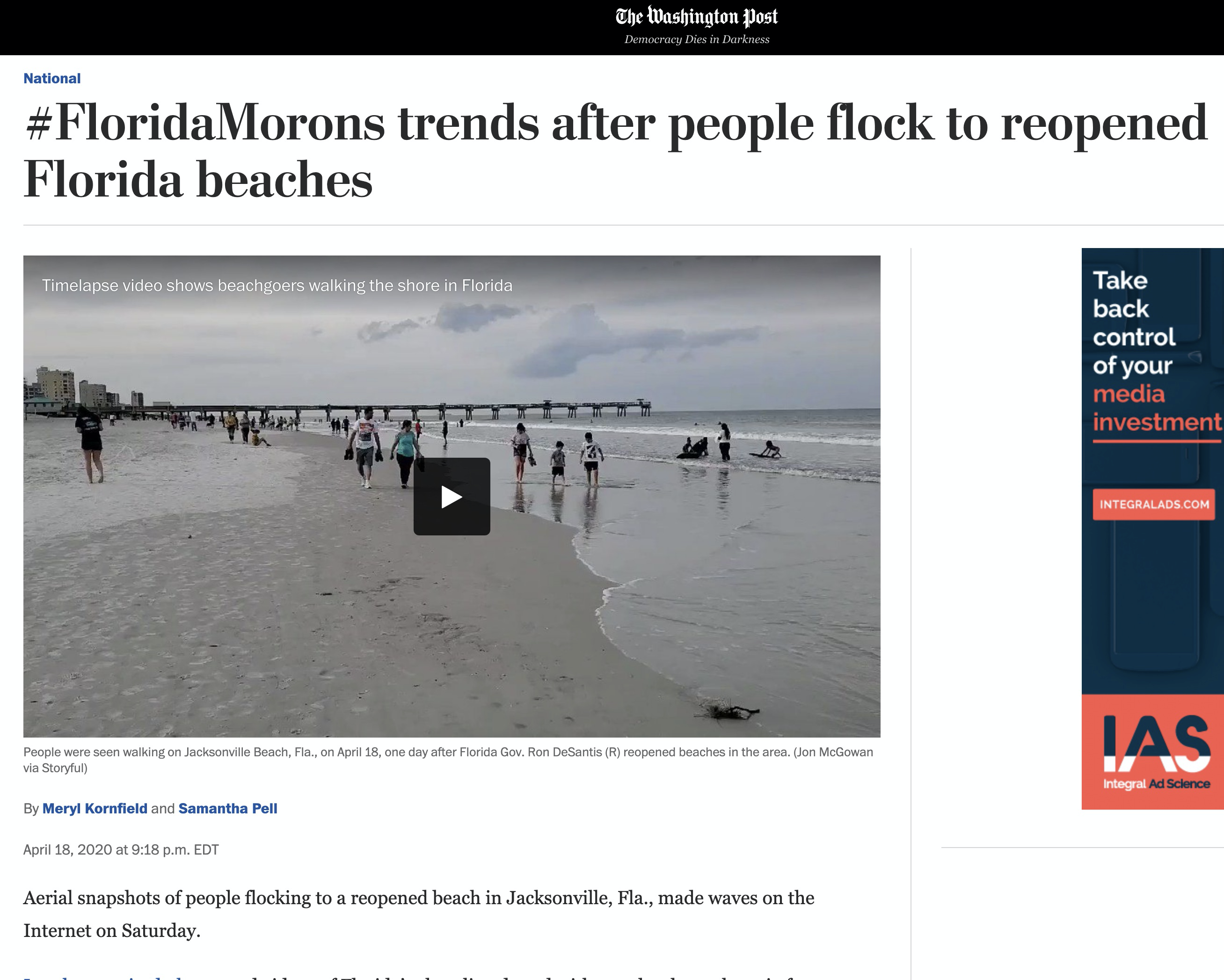 Not even a single fucking face mask in sight. #FloridaMorons pic.twitter.com/UxtJ3pft5x

At the same time, a related claim appeared that the images — particularly the one in which a woman in a white shirt appeared at the front and center — were “stock photographs” and predated the coronavirus pandemic:

A heads up, folks. The pics that you’re seeing showing a crowded @CityofJax beach? They’re not from yesterday. Here’s what it actually looked like. @JohnEkdahl @NDH_j_m_f https://t.co/oOjfYJ2zIG

Although they didn’t specifically claim that this photograph of the woman in white was misdated, at least two Florida-area news sites shared Facebook video — drone footage of sparsely attended beaches.

Jacksonville made national headlines yesterday for the partial reopening of beaches. Many of those reports carried old photos and videos. Here’s drone video from the sky. Stay safe!

Jacksonville beaches amid COVID-19
Jacksonville made national headlines yesterday for the partial reopening of beaches. Unfortunately, many of those reports carried old photos and videos of crowded beaches causing many in the U.S. to ask, ‘what in the heck is going on down there?’

Here’s drone video of what it actually looked like. Stay safe!

Although both posts alluded to “old photos and videos” used by unspecified “reports,” no particular image as singled out in either — unlike the tweets, which pointed to the “white shirt image.”

So, was that old?

We easily located the photograph on Getty Images’ website, which explained its widespread use — Getty Images licenses news photographs to agencies internationally. Its caption indicated that this specific photograph was taken on April 17 2020:

Jacksonville, Florida Re-Opens Beaches After Decrease In COVID-19 Cases
JACKSONVILLE BEACH, FLORIDA – APRIL 17: People are seen at the beach on April 17, 2020 in Jacksonville Beach, Florida. Jacksonville Mayor Lenny Curry announced Thursday that Duval County’s beaches would open at 5 p.m. but only for restricted hours and can only be used for swimming, running, surfing, walking, biking, fishing, and taking care of pets. (Photo by Sam Greenwood/Getty Images)

Of course, it is entirely possible and likely that the “drone footage” shared in the two above posts was also authentic — just captured at a different point of the day, when the people shown in the Getty Images photograph had gone home.

Not long after Florida announced that it would be reopening its beaches in the middle of a global pandemic, a rumor appeared that images of people on crowded Jacksonville beaches — published by news organizations globally — were in fact “old photos” taken before COVID-19 had appeared in the United States. When we located Getty Images’ listing for the most popular photograph, it was dated April 17 2020 and was not old — it was taken on the day beaches reopened. It was possible that some old photographs were spreading, but we did not find any. Further, when a specific image was identified as “old,” it was usually the one that in fact was taken the day beaches reopened in Florida.