The United States issued a travel warning for New Zealand on August 6 2020, due to the country's "23 active cases" in managed quarantine.

An August 7 2020 tweet by the New Zealand Herald claimed that the United States issued a travel warning to its citizens about New Zealand due to the country’s purported 23 active cases of COVID-19:

The US Government has warned its citizens to be very cautious about travelling to New Zealand because of our "23 active cases" of Covid-19.https://t.co/TejZdXyHID

The US Government has warned its citizens to be very cautious about travelling to New Zealand because of our “23 active cases” of Covid-19.

The claim also appeared twice on Reddit, both on r/worldnews; a version of the same story was published by another outlet in New Zealand and by aggregator Boing Boing.

As of August 7 2020, according to the official website of the U.S. Embassy and Consulate in New Zealand (and their Ministry of Health), there were currently 23 active cases of COVID-19 in the country:

As of August 7th 2020, New Zealand has had 1,569 confirmed & probable cases of COVID-19 within its borders (interactive map of New Zealand cases / the latest number of cases can be found here). Currently, there are 23 active cases in New Zealand.

A Ministry of Health chart uploaded the morning of August 7 2020 provided additional context for the community spread of COVID-19 in New Zealand:

As we noted in a previous fact-check, COVID-19 was manageable in New Zealand in mid-June 2020 to a point where activities such as professional sports resumed. Large crowds attended rugby games:

‘New Zealand Rugby Game Today as We Have No COVID Cases’

By contrast, we were unable to locate a clear, very large number of currently active COVID-19 cases in the United States as of August 6 2020.

Information from Worldometers.info (whose numbers, we should caution, are sometimes in dispute or unverified) indicated a total of 2,320,890 active cases existed in the United States. Google’s COVID-19 dashboard displayed information on the number of new cases each day: 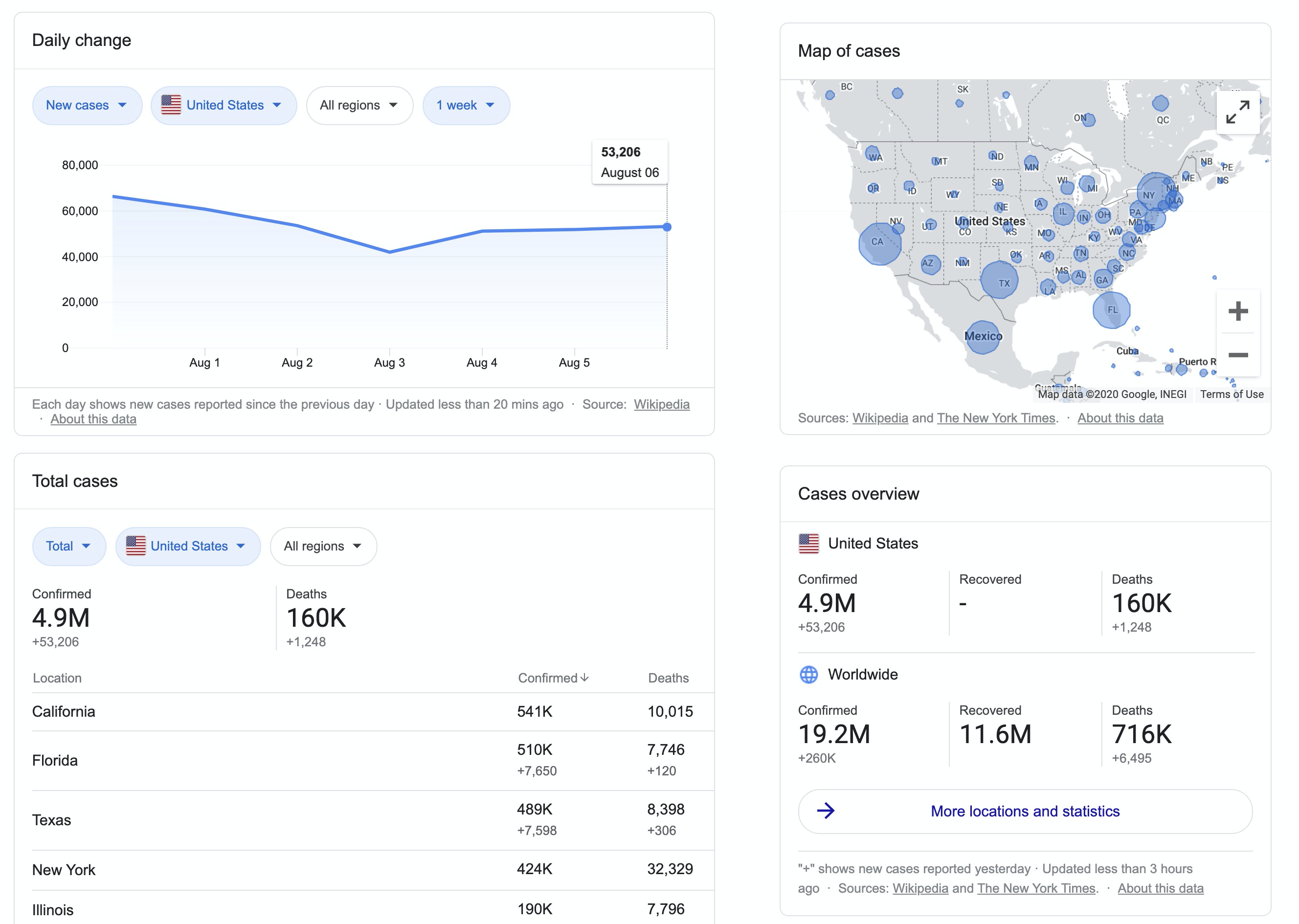 Population for the United States Versus New Zealand, and Relevant Adjustments

Proportionally, the United States’ rate of transmission was clearly more severe than that in New Zealand. Using the same numbers (794 cases at the US’ rate divided by the 23 cases), the United States daily new case rate of 53,206 was 34.5 times higher than New Zealand’s total active case count of 23 (counted from between zero and three new cases each day in the preceding weeks).

Simply put, the United States was definitively outpacing New Zealand in terms of new cases, active cases, and COVID-19 transmission as a whole.

The US Government has warned its citizens to be very cautious about travelling to New Zealand because of our “23 active cases” of Covid-19.

Despite the US recording more than 2 million cases and 160,000 deaths, the government is advising against travelling to New Zealand.

According to the US government’s travel advice website, it called for increased caution when travelling here.

It places New Zealand at Level 2 on its travel advisory system, which asks its citizens to “exercise increased caution in New Zealand due to Covid-19”.

“As of August 7, 2020, New Zealand has had 1569 confirmed and probable cases of Covid-19 within its borders. Currently, there are 23 active cases in New Zealand,” the post states.

The website, however, doesn’t explain all 23 active cases are in managed isolation.

Clicking through a link led readers to travel.state.gov, the U.S. Department of State’s site for travel advisories. On the linked page, an August 6 2020 warning looked like this: 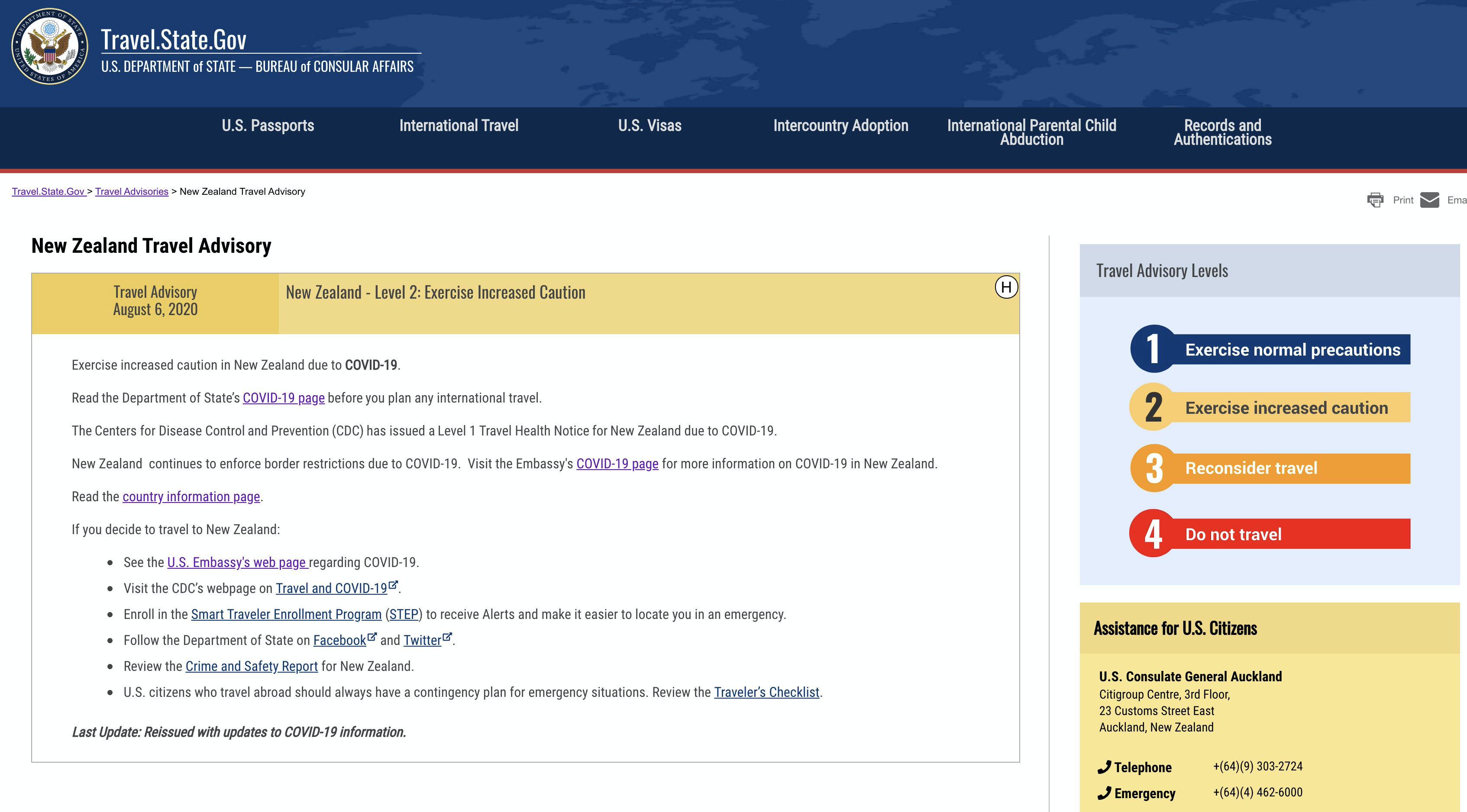 Exercise increased caution in New Zealand due to COVID-19.

Read the Department of State’s COVID-19 page before you plan any international travel.

The Centers for Disease Control and Prevention (CDC) has issued a Level 1 Travel Health Notice for New Zealand due to COVID-19.

New Zealand continues to enforce border restrictions due to COVID-19. Visit the Embassy’s COVID-19 page for more information on COVID-19 in New Zealand.

A version of the page matching the screenshot above was archived on August 7 2020. Prior to that, the most recent archive of the page was captured on March 11 2020, at the very start of the COVID-19 pandemic; at that time, New Zealand was at “Level 1: Exercise Normal Precautions.”

Separate reporting from a different news outlet in New Zealand, stuff.co.nz, indicated that the United States issued “blanket guidance” in mid-March 2020, and that it reverted to country-specific warnings:

The Donald Trump administration has rescinded its warnings to Americans against all international travel because of the coronavirus pandemic, saying conditions no longer warrant a blanket worldwide alert.

The State Department lifted its level-four health advisory for the entire world in order to return to country-specific warnings.

That move came shortly after the Centers for Disease Control and Prevention revised its Covid-19 travel advisory information. The CDC lifted “do not travel” warnings for about 20 locations but advised staying away from the vast majority of the world.

Seven places, including Thailand, Fiji and New Zealand, are in a low-risk group, according to the CDC, although officials there advised that certain people, such as older adults and those with certain underlying medical conditions, talk to their doctors before making the trip. For more than a dozen other locations, it had no precautions. Taiwan, Greenland, and Laos are on that list.

A reasonable interpretation of that version of the claim suggested that instead of New Zealand being the subject of a new, higher caution level on August 6 2020, it was actually downgraded when the “blanket guidance” was rescinded.

Similar information appeared on the US Embassy in New Zealand’s COVID-19 information page. The relevant portion was undated, however, making it difficult to determine whether New Zealand was “blanket” downgraded to a lower level, or whether the “23 active cases” had any effect on official travel warnings:

Travel Advisory: Level 2 – The Department of State advises U.S. citizens to exercise increased caution when traveling due to the global impact of COVID-19. More information on this travel advisory is available on travel.state.gov.

At the bottom of the page, a date of August 7 2020 was listed, possibly the date of the most recent updates to the page.

U.S. Department of State Travel Advisories as of August 7 2020

On August 7 2020, we sorted travel advisories on travel.state.gov, ascending from Level 1 to Level 4. Two countries were listed at Level 1, and nine in total were Level 2. It appeared that there were changes across the board on August 6 2020: 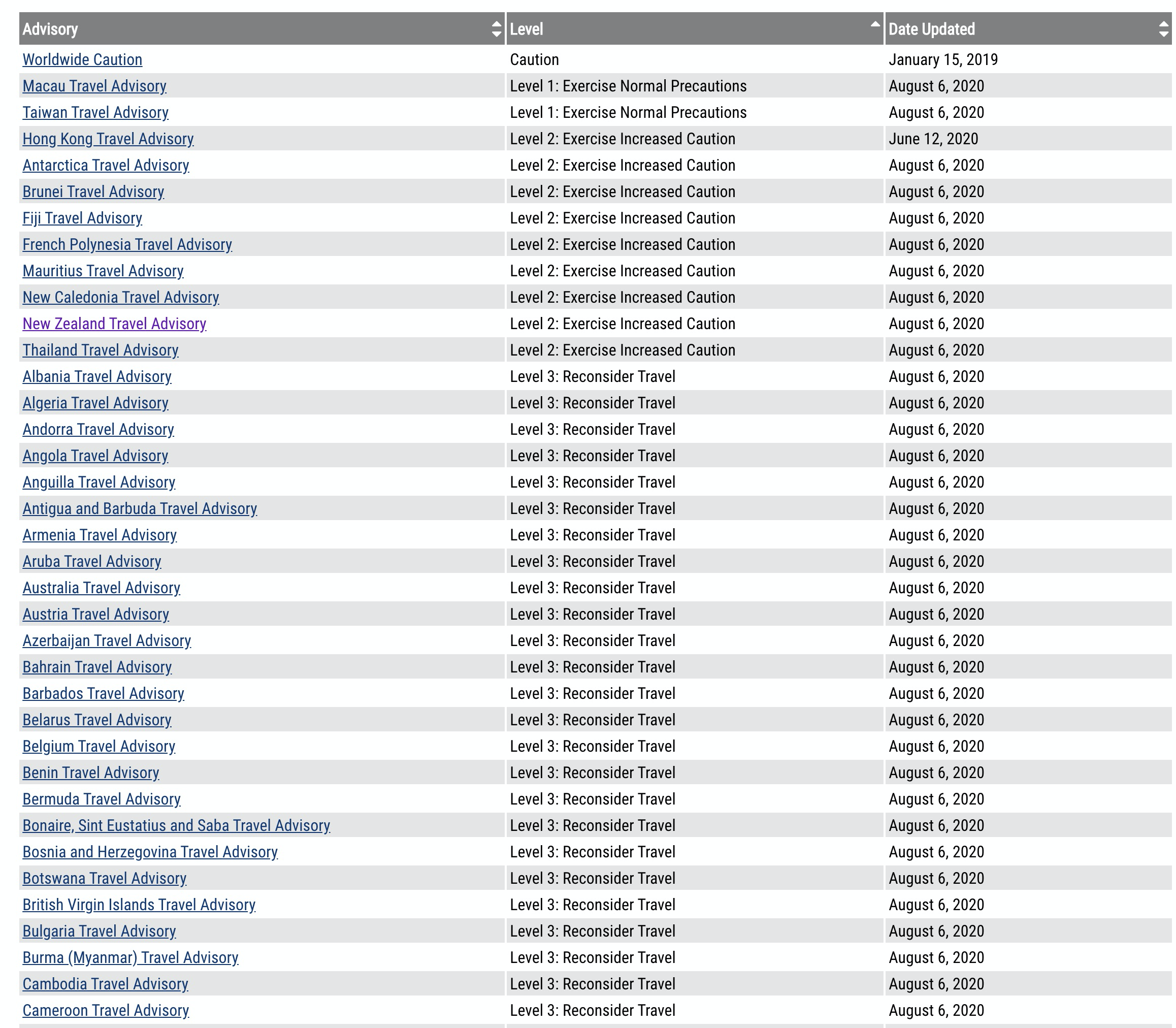 Macau and Taiwan were rated Level 1 (“Exercise Normal Precautions); Hong Kong, Antarctica, Brunei, Fiji, French Polynesia, Mauritius, New Caledonia, New Zealand, and Thailand were all rated Level 2 (“Exercise Increased Caution.”) The balance of countries were at Level 3 (“Reconsider Travel”) or higher. A commenter on the New Zealand Herald‘s tweet identified themselves as an American expatriate in New Zealand, and said:

I received an email:

The Department of State has removed the worldwide Level 4 Health Advisory: Do Not Travel and the Travel Advisory for New Zealand has changed to Level 2: Exercise increased caution.

Exercise increased caution in New Zealand due to COVID-19.

I read it more as a loosening of restrictions.

A viral New Zealand Herald tweet claimed the United States government “warned its citizens to be very cautious about travelling to New Zealand because of our ’23 active cases’ of Covid-19,” which could be considered “technically true” but is misleading nevertheless. On August 6 2020, the Department of State rescinded a blanket travel warning in place of country-specific guidance. It is true that New Zealand was one of a small handful of countries ranked at Level 1 or Level 2; the majority of countries were ranked at Level 3 or 4 (reconsider or do not travel). Although New Zealand was not one of the two countries (Macau and Taiwan) at Level 1, it was still one of nine countries at Level 2.