In early July 2020, a photo began circulating on Facebook of Biden kneeling, accompanied by the caption “Joe Biden takes a knee after spotting an American flag near his childhood home in Pennsylvania.” 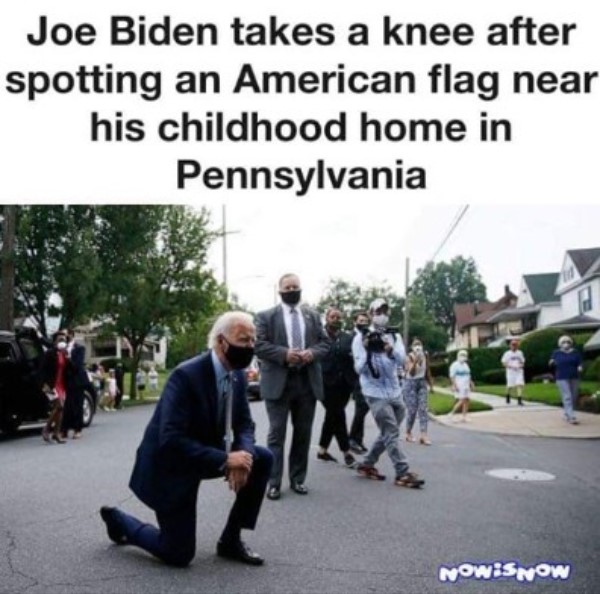 The false accusation is based on the presumption that Biden — who has won the Democratic Party’s presidential nomination — was taking part in protests against police brutality, which right-wing media outlets and social media users have falsely characterized as being anti-military. In fact, then-San Francisco 49ers quarterback Colin Kaepernick originated the silent protest in 2016, after he had a discussion about the issue with retired U.S. Army Green Beret Nate Boyer.

One anti-Biden post added its own insults while also demonizing others protesting brutality:

And he wants to be President of this great Country? If he will bend a knee to our flag for the mob, what will he also bend for with foreign envisions and other Countries?
Wow! Never vote for someone this weak!

Compounding the false assumption about “taking a knee,” the graphic also distorted the meaning behind Biden kneeling. As Reuters and several other outlets have reported, he was actually doing so to speak to a child.

The photograph was originally taken by Matt Slocum of the Associated Press and published with the caption, “Democratic presidential candidate, former Vice President Joe Biden kneels to talk with a child during a visit to Biden’s childhood home in Scranton, Pa., on Thursday, July 9, 2020.” While the child is not seen in Slocum’s photograph, he is visible in footage taken at the scene by C-SPAN.

The Facebook post pushing the falsehoods surrounding Biden’s encounter is still available on the site, albeit attached to a notice that the claim was ruled “partly false”: 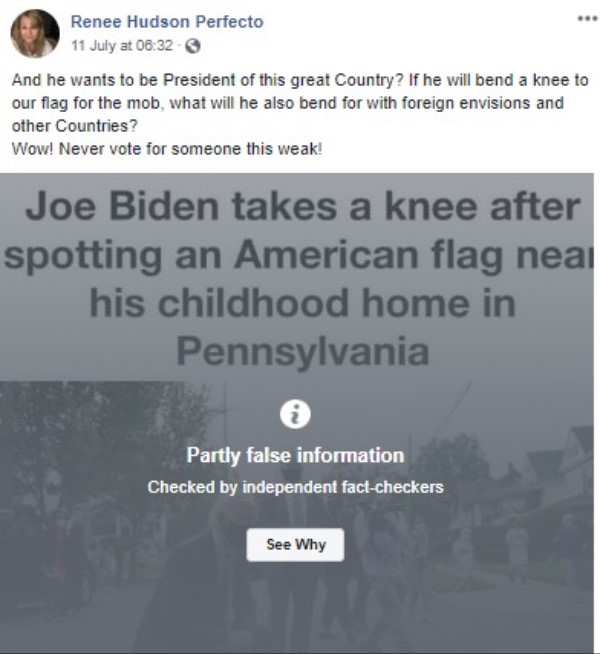 However, no such notice appears when the photo is reproduced on group pages like this one, which was posted in a group called “Deplorable Trump Gang”: 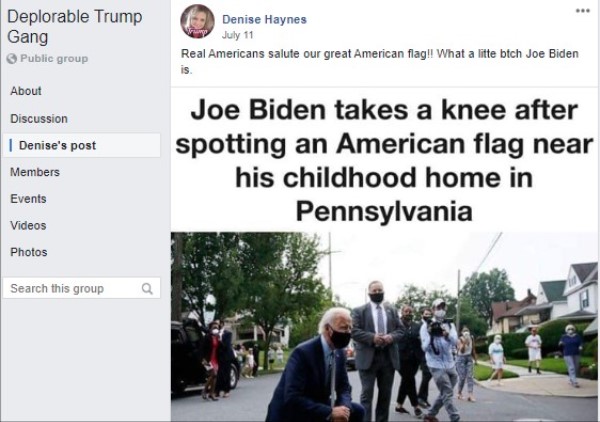 The spread of the photo — and the dubious attempt to paint Biden as part of the “mob” — came just before a new wave of reports in August 2020 casting doubt on not only accusations that Facebook is biased against right-wing users and lawmakers but its own self-professed political neutrality.

As Buzzfeed reported, an “irregularity” on Instagram — the photo and video platform that Facebook bought in 2012 — directly affected the search results users found if they looked for Biden or sought to follow him:

a search on Instagram for #JoeBiden would have surfaced nearly 390,000 posts tagged with the former vice president’s name along with related hashtags selected by the platform’s algorithm. Users searching Instagram for #JoeBiden might also see results for #joebiden2020, as well as pro-Trump hashtags like #trump2020landslide and #democratsdestroyamerica.

A similar search for #DonaldTrump on the platform, however, provided a totally different experience. Besides showing 7 million posts tagged with the president’s name, Instagram did not present any related hashtags that would have pushed users toward different content or promoted alternative viewpoints.

An Instagram spokesperson called the discrepancy a “technical error.” Buzzfeed also reported that Facebook fired an employee who had compiled evidence that Facebook staff, including members of its “policy team,” had intervened on behalf of conservatives to remove fact-checks concerning their content. His post was removed from an internal group forum and his evidence was made inaccessible to other employees on the same site.

Prior to his firing, the same employee also found that the company’s vice president of global public policy Joel Kaplan personally intervened in a fact-check ruling concerning an Instagram post by right-wing commentator Charlie Kirk conducted by PolitiFact.

Kaplan has also been cited as the person responsible for a separate site, Check Your Fact, becoming one of Facebook’s fact-checking “partners.” Check Your Fact is a subsidiary of the right-wing Daily Caller blog, which has also reportedly sent fundraising emails promoting U.S. President Donald Trump’s re-election campaign. Thus far in 2020 the blog has also collected money from both the National Republican Congressional Committee and the National Republican Senatorial Committee for “list rentals” for marketing purposes. They remain fact-checking partners regardless.

According to BuzzFeed, Facebook’s chief executive officer Mark Zuckerberg also “danced around the question” when asked at a staff meeting why the platform would continue listing the right-wing blog Breitbart as part of its Facebook News program despite the blog promoting disinformation regarding the COVID-19 pandemic.

“This was certainly one strike against them for misinformation, but they don’t have others in the last 90 days,” Zuckerberg reportedly said. “So by the policies that we have, which by the way I think are generally pretty reasonable on this, it doesn’t make sense to remove them.”

By comparison, Facebook has listed Truth or Fiction as “clickbait” and taken other steps to limit the reach of our fact checks on its platform without explanation or clarification, despite repeated inquiries.