Image depicts a tweet from the World Health Organization on January 14 2020, indicating there was "no clear evidence of human-to-human transmission of the novel #coronavirus."

After United States President Donald Trump announced that he had discontinued funding to the World Health Organization, and presidential advisor Kellyanne Conway subsequently blamed the COVID-19 pandemic on the group on April 15 2020, a tweet attributed to the WHO about a dearth of evidence supporting “human-to-human transmission” of what we now call COVID-19 began to be circulated in an apparent smear campaign: 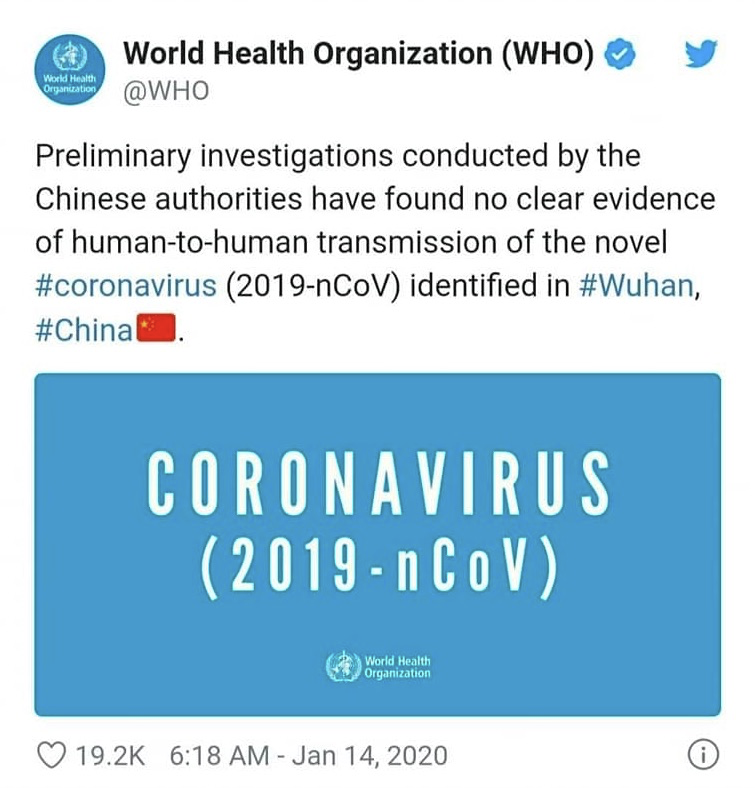 Preliminary investigations conducted by the Chinese authorities have found no clear evidence of human-to-human transmission of the novel #coronavirus (2019-nCoV) identified in #Wuhan, #China

Screenshots of the sort appeared commonly in response tweets to news organizations such as the BBC and New York Times, along with claims the WHO was aware the purported tweet was inaccurate when it was published:

They claimed it wasn’t spread from human-to-human on January 14.

It also was grouped with other screenshots of the sort, in debates over who was at “fault” for the pandemic:

Typically, shares of the image suggested it showed that the World Health Organization was claiming there was no evidence of human-to-human transmission of the novel coronavirus.

The tweet itself was authentic and unaltered — but it was, in true disinformation form, presented with misleading and inaccurate context:

Preliminary investigations conducted by the Chinese authorities have found no clear evidence of human-to-human transmission of the novel #coronavirus (2019-nCoV) identified in #Wuhan, #China🇨🇳. pic.twitter.com/Fnl5P877VG

What it said was the following, including an important distinction:

Preliminary investigations conducted by the Chinese authorities have found no clear evidence of human-to-human transmission of the novel #coronavirus (2019-nCoV) identified in #Wuhan, #China🇨🇳.

Two days prior on January 12 2020, the WHO’s “Disease outbreak news” section included an alert titled “Novel Coronavirus – China,” which included what was at that point a very recent timeline of transmission:

On 11 and 12 January 2020, WHO received further detailed information from the National Health Commission about the outbreak.

Among the 41 confirmed cases, there has been one death. This death occurred in a patient with serious underlying medical conditions.

China shared the genetic sequence of the novel coronavirus on 12 January, which will be of great importance for other countries to use in developing specific diagnostic kits.

The cluster was initially reported on 31 December 2019, when the WHO China Country Office was informed. The Chinese authorities identified a new type of coronavirus (novel coronavirus, nCoV), which was isolated on 7 January 2020. Laboratory testing was conducted on all suspected cases identified through active case finding and retrospective review. Other respiratory pathogens such as influenza, avian influenza, adenovirus, Severe Acute Respiratory Syndrome coronavirus (SARS-CoV), Middle East Respiratory Syndrome coronavirus (MERS-CoV) were ruled out as the cause.

According to information conveyed to WHO by Chinese authorities on 11 and 12 January, 41 cases with novel coronavirus infection have been preliminarily diagnosed in Wuhan City. Of the 41 cases reported, seven are severely ill. This is when the one death, mentioned above, was reported, in a patient with other underlying health conditions. Six patients have been discharged from hospital. Symptom onset of the 41 confirmed nCoV cases ranges from 8 December 2019 to 2 January 2020. No additional cases have been detected since 3 January 2020.

According to the preliminary epidemiological investigation, most cases worked at or were handlers and frequent visitors to the Huanan Seafood Wholesale Market. The government reports that there is no clear evidence that the virus passes easily from person to person.

Currently, no case with infection of this novel coronavirus has been reported elsewhere other than Wuhan.

According to both the tweet and concurrent update, information was provided to the WHO by public health officials in China. Additionally, the “cluster” of infections was reported just under two weeks prior on December 31 2019, and what was then called “novel coronavirus, nCoV” was identified five days before the press release, on January 7 2020.

In essence, that tweet represented a snapshot in time based on the information that was available at the time; it appeared just five days after SARS-CoV-2 was identified, and before that widespread nomenclature was in use. It was followed by a succession of information about COVID-19.

The day before the tweet was published, the World Health Organization issued a “WHO statement on novel coronavirus in Thailand,” calling for outbreak preparedness outside China:

The World Health Organization (WHO) is working with officials in Thailand and China following reports of confirmation of the novel coronavirus in a person in Thailand.

The person was a traveler from Wuhan, China, and was identified by Thai officials on 8 January [2020], and hospitalized that day. The person is recovering from the illness according to Thai officials.

The possibility of cases being identified in other countries was not unexpected, and reinforces why WHO calls for on-going active monitoring and preparedness in other countries. WHO has issued guidance on how to detect and treat persons ill with the new virus.

This [meeting] will also fast-track the development and evaluation of effective diagnostic tests, vaccines and medicines, while establishing mechanisms for affordable access to vulnerable populations and facilitating community engagement.

It was followed by an additional update on February 12 2020. WHO also maintained a regularly updated resource, “Rolling updates on coronavirus disease (COVID-19).” It began with the following entry, which linked to a January 5 2020 update titled “Pneumonia of unknown cause – China”:

At the close of 2019, the WHO China Country Office was informed of a pneumonia of unknown cause, detected in the city of Wuhan in Hubei province, China. According to the authorities, some patients were operating dealers or vendors in the Huanan Seafood market.

Staying in close contact with national authorities, WHO began monitoring the situation and requested further information on the laboratory tests performed and the different diagnoses considered.

Several updates later, the WHO announced its first “field visit” to Wuhan:

The delegation observed and discussed active surveillance processes, temperature screening at Wuhan Tianhe airport, laboratory facilities, infection prevention and control measures at Zhongnan hospital and its associated fever clinics, and the deployment of a test kit to detect the virus.

The delegation also discussed public communication efforts and China’s plan to expand the case definition for the novel coronavirus, which will build a clearer picture of the spectrum of severity of the virus.

At the end of the visit, the Chinese Government released the primers and probes used in the test kit for the novel coronavirus to help other countries detect it. Chinese experts also shared a range of protocols that will be used in developing international guidelines, including case definitions, clinical management protocols and infection control.

On January 30 2020, the WHO declared a “Public Health Emergency of International Concern”:

Acknowledging that cases have been reported in five WHO regions in one month, the Committee noted that early detection, isolating and treating cases, contact tracing and social distancing measures – in line with the level of risk – can all work to interrupt virus spread.

And on February 11 2020, the WHO disclosed a name for the illness caused by the novel coronavirus, COVID-19:

Ten days after COVID-19 was officially named, the WHO’s Director-General Tedros Adhanom Ghebreyesus warned a window of opportunity to avert a pandemic was closing:

Countries with weaker health systems need the 🌍's focus & support now, due to the potential for #COVID19 to spread to those locations.
We must take advantage of the window of opportunity we have to contain the outbreak. We don't want to look back later & regret failing to act.

The following day, the WHO Director-General and Regional Director for Africa “addressed an emergency meeting of ministers of health to agree on a continental strategy for Africa to strengthen preparedness and responses to the COVID-19 outbreak”:

It’s great to see African leadership in action. Today’s meeting on #coronavirus convened by the @_AfricanUnion and attended by @WHO and partners is a powerful demonstration of collective political commitment to tackling #coronavirus pic.twitter.com/crsYAZlC1F

Several updates occurred between that date and February 27 2020, when the WHO issued the following guidance — urging countries to mount a proactive response to the emerging pandemic:

What every country should be asking itself
27 February 2020

Discussing preparedness for COVID-19, the WHO Director-General listed questions every health minister should be able to answer. Here are a selection:

On March 2 2020, the WHO’s Director-General beseeched world leaders to focus on containing COVID-19, adding there was “no choice but to act now”:

Our message to all countries is: this is not one-way street. We can push this #coronavirus back.

Your actions now will determine the course of the #COVID19 outbreak in your country.

There’s no choice but to act now. pic.twitter.com/osNPVas2Tr

A day after that, WHO warned of looming personal protective equipment (PPE) shortages the world over: 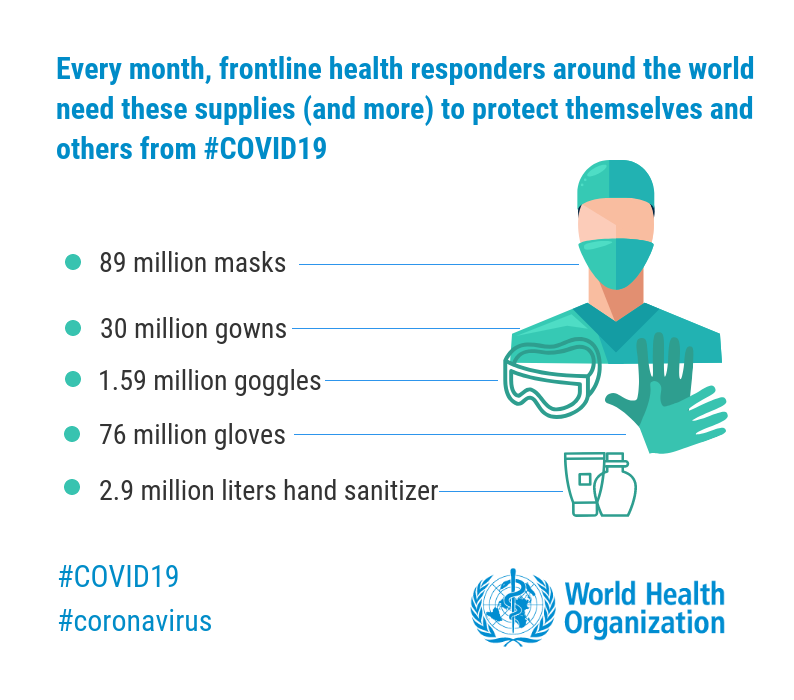 Every country should urgently take all necessary measures to slow further spread and to protect health systems from becoming overwhelmed with patients seriously ill with #COVID19 https://t.co/4QQ7VcQPe4#coronavirus pic.twitter.com/mO1gBIzVGz

Finally, on March 11 2020, the WHO officially classified COVID-19 as a pandemic:

"We have therefore made the assessment that #COVID19 can be characterized as a pandemic"-@DrTedros #coronavirus pic.twitter.com/JqdsM2051A

The screenshot of a January 14 2020 WHO tweet — often accompanied by claims the organization “knew” and “did nothing” to stop COVID-19 — suggested that the organization maintained there was “no clear evidence of human-to-human transmission of the novel #coronavirus.” For context, that tweet appeared five days after SARS-CoV-2 was identified, and the case count was low. The World Health Organization, in fact, preceded that statement with “Preliminary investigations conducted by the Chinese authorities have found …,” indicating their only information was secondhand. Finally, claims the WHO underestimated COVID-19 are implausible in light of its novel coronavirus timeline (date and timestamped), in which the organization repeatedly and with growing urgency implored world governments to contain the disease, before formally identifying a COVID-19 pandemic on March 11 2020.