In mid-April 2020, a meme appeared on Facebook, a “very appropriate analogy” about “flattening the curve” of the COVID-19 pandemic amid growing calls to lift social distancing measures (occasionally in the form of protests).

Versions of the meme read:

Here’s a very appropriate analogy: “The curve is flattening; we can start lifting restrictions now” = “The parachute has slowed our rate of descent; we can take it off now”

By far, the most popular version appeared to be a screenshot of a Facebook text-only status update, and we were unable to find the original: 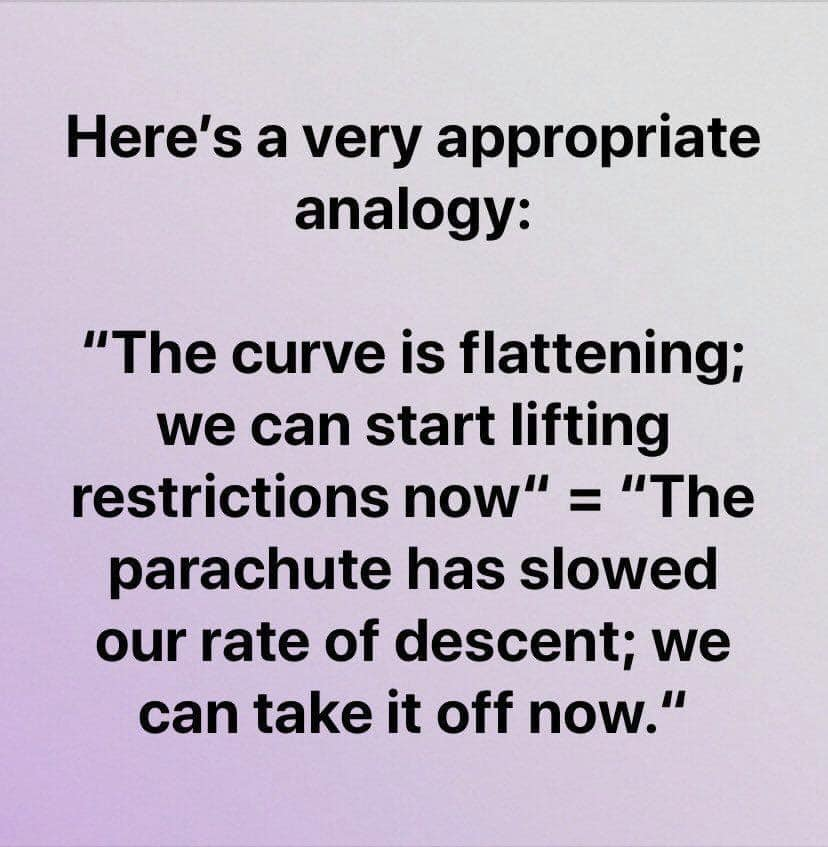 A version shared by a user on April 13 2020 was shared over 30,000 times; an identical version published by the page Feminist News on the afternoon of April 16 2020 was moving quite quickly that day. However, iterations appeared as early as April 12 2020:

Flattening the curve and COVID-19

By mid-April 2020, the term “flattening the curve” was one with which most users were familiar in relation to COVID-19.

A March 11 2020 University of Michigan Health News explainer addressed the concept as it related to SARS-CoV-2 and epidemiology, using the visual aid of a graph representing healthcare capacity:

What curve? And why is flatter better?
If you look at the [graph] above, you can see two curves – two different versions of what might happen in the United States, depending on next steps.

The tall, skinny curve is bad – it means that a lot of people will get sick at once, in a short period of time because we don’t take enough steps to prevent the virus from spreading from person to person.

Most people won’t get sick enough to need a hospital. But those who do could overwhelm the number of beds and care teams that our nation’s hospitals have available.

After all, [medical historian Howard] Markel points out, many emergency rooms and hospitals already operate close to capacity on a good day, without coronavirus. Adding a sharp spike in very ill COVID-19 patients to that traffic could mean some people don’t get the care they need – whether they have coronavirus or not.

“An outbreak anywhere can go everywhere. We all need to pitch in to try to prevent cases both within ourselves and in our communities.”

The flatter, lower curve is a much better one – but it will take working together to make it happen, says Markel, who’s the director of the Center for the History of Medicine at the U-M Medical School.

That explainer initially appeared on March 11 2020, the day COVID-19 was officially declared a global pandemic by the WHO.

Although there was no “national lockdown” in effect in the United States at any point through mid-April 2020, a number of states announced “stay at home” or “shelter in place” measures on or around March 20 2020. By April 16 2020, many Americans had been under such directives for the better part of one month.

What triggered social distancing measures and broad efforts to flatten the curve of COVID-19?

No one event or finding necessarily informed all efforts to implement the “lockdown” or “quarantine” efforts in states and countries.

However, a March 16 2020 Imperial College London report about the available means to avert mass mortality attracted global notice. That report observed that no pharmaceutical approach to COVID-19 existed, and that the only available measures to combat the rapidly spreading disease involved non-pharmaceutical interventions, such as social distancing (also called physical distancing):

In addition, the report focused in parts on “surge capacity,” and efforts to prevent overwhelming healthcare systems. By the end of March 2020, hospitals in New York City and its surrounding environs were already buckling under a massive influx of patients.

Was the COVID-19 curve flattened otherwise?

On April 15 2020, ABC News published “Flattening the coronavirus curve: It’s happening, but it’s not over yet,” along with a graph like the one referenced above: 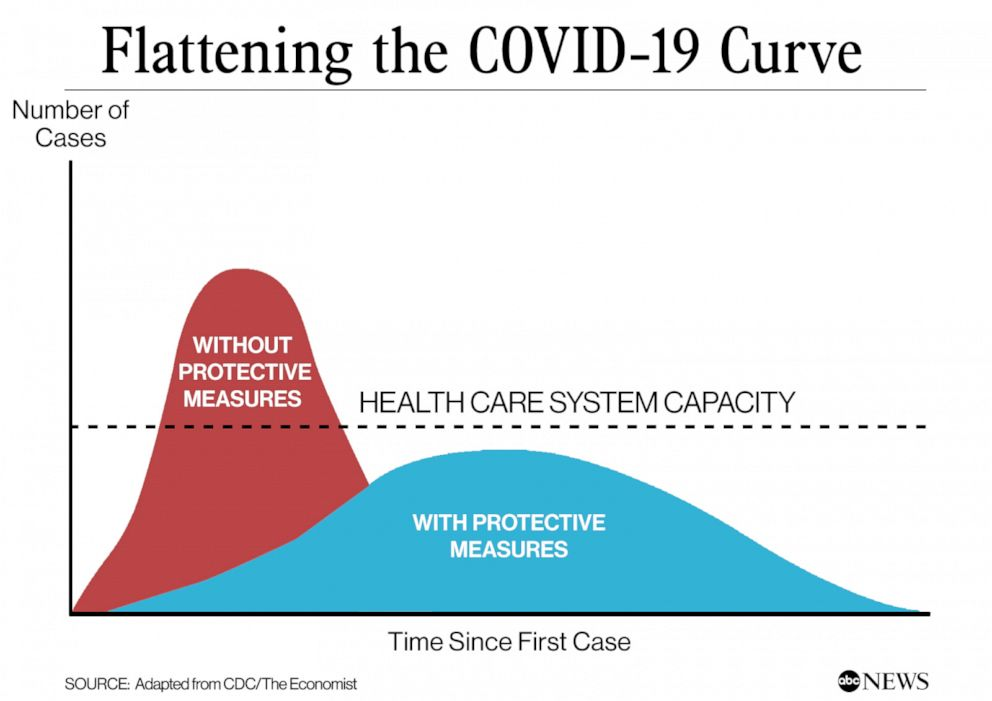 ABC News addressed the effects of social distancing measures as the one-month mark neared, indicating that the effect described in the parachute analogy had been observed — but cautioning readers not to become complacent:

As some states near an infection “plateau,” public health experts are stressing that we still must continue to socially distance — no matter the challenges it brings.

“It appears that we have a plateau. It is flattening. It’s the flattening of the curve,” New York Gov. Andrew Cuomo said [the] week [of April 15 2020].

“The increase has slowed down; it flattens out for a period of time. Nobody knows how long, because nobody’s been here before.”

In that article, a Yale economist discussed the eventual end of social distancing, and a possible strategy for eventually relaxing the measures; MacDonald noted that the measures would likely be in place to some degree until a vaccine was developed and ready for use:

MacDonald emphasizes that distancing also buys us time to develop treatments and develop a vaccine.

But [Dr. Eli Fenichel, a resource utilization economist at Yale University] is concerned that we don’t have quite enough time for the trial-and-error of vaccine or drug development to yield meaningful results on American lives — so he is hoping we can transition to a track and trace system soon, because we know it will work.

Ultimately, there was indication the curve was starting to flatten (with the exception of New York, where hospitals remained overwhelmed.) But MacDonald warned that April 2020 was too early to lift the restrictions.

Of note is that Fenichel’s area of expertise was not medicine, but economics, and his commentary favored less aggressive social distancing. MacDonald, an epidemiologist, focused more on the science of COVID-19 suppression.

As the meme suggested, calls to lift the measures entirely had begun — including an April 13 2020 protest in Ohio:

Similar protests were reported in other states, where participants eschewed personal protective equipment (PPE) like masks, and held signs indicating they wished to return to work.

What if social distancing measures stopped too soon, and when will things go back to normal?

An April 14 2020 Huffington Post item included commentary from infectious disease experts and epidemiologists about calls to end the measures. Broadly, those experts cautioned that being lulled into a false sense of safety or security was easy, and resisting the urge to “go back to normal” could have fatal consequences and cause a “surge” of cases:

Claiming premature victory could be fatal.

COVID-19 spread like wildfire around the globe, and there are a couple of reasons why. The virus is “moderately infectious,” and for every person who catches the virus, they’ll likely pass it to several more people, said Thomas A. Russo, chief of the division of infectious diseases at the University of Buffalo’s Jacobs School of Medicine and Biomedical Sciences.

On top of that, there are a lot of silent carriers. While experts originally thought asymptomatic transmission was rare, some now estimate a quarter of people with COVID-19 have no idea they’re infected.

“This is the importance of social distancing,” said Michael LeVasseur, a visiting assistant professor of epidemiology and biostatistics at Drexel University’s Dornsife School of Public Health. “Since individuals are likely capable of transmitting the virus when they are asymptomatic, limiting the number of contacts any individual has to the household, for example, will limit the spread of the virus.”

So, what happens if we loosen up social distancing measures? It depends on the point in the so-called “curve” that each state or municipality decides to lift its guidelines.

“If we have the public health infrastructure that individuals can report to a testing clinic to receive a test and then self-isolate while awaiting results, [maybe it would work],” LeVasseur said. “If we don’t, then they’ll likely continue infecting people and we will see a surge of cases.”

LeVasseur addressed the variables involved, such as population density in any given area. He also noted that a return to “normal” seemed more distant than many knew:

A city’s fate and the force of the infection in a given area will probably depend on its population density. Like we’re seeing right now in New York City, “the more dense the population, the more contacts any individual has, the more opportunity to transmit the virus,” said LeVasseur, who noted that New York City has seen over 87,000 cases at press time and has a population density of 66,940 people per square mile.

“I don’t believe that we go back to normal at all,” LeVasseur said. “Not until there’s an effective treatment or vaccine, anyway. We can regain some semblance [of normalcy], but we will need to remain vigilant as citizens and scale up our public health efforts in order to prevent future surges.”

WXIN carried a similar message from public health experts, warning against complacency as the curve flattened and pointing to historical data:

Dr. Kara Cecil, assistant professor of public health at the University of Indianapolis, said the fact that speaks loudest during the coronavirus fight in Indiana is the role that social distancing has played in holding back the pandemic’s potential impact.

“Social distancing has absolutely been the key in mitigating our impact of coronavirus in this country,” she said. “So social distancing isn’t always fun, and it isn’t easy, and there are always costs to it, but it is the way we can stop the spread of this. We have limited options for therapeutics, and we have no vaccine, so our only option is to stop the spread.”

Dr. Cecil said other countries that delayed implementing social distancing guidelines have fared worse during this pandemic, and the lessons from the 1918 Spanish Influenza outbreak prove that lifting restrictions too early can reignite a dying infection rate.

“The longer people engage in the social distancing as directed, we will see less and less loss of life,” she said. “Those cities who prematurely relented on social distancing interventions, they fared worse, and more people died in those places as compared to others.”

So, was the analogy apt?

According to public health officials, epidemiologists, and medical historians, humans were inclined to act on early effects, and their commentary hewed closely to that quoted sentiment: “‘The curve is flattening so we can start lifting restrictions’ is like saying ‘The parachute has slowed our rate of descent so we can take it off now.'” Protests against COVID-19 social distancing measures appeared to rise in direct relation to their pleas the public be patient and continue adhering to the measures. As far as the “parachute” aspect went, medical experts nearly unanimously voiced fear that premature revocation of the measures would indeed be akin to discarding a life-saving tool solely because it worked well enough to suggest the work of flattening the curve was finished.

Update, April 20 2020, 3:14 PM: The individual whose original Facebook post appeared in the purple version of the COVID-19 “parachute” analogy, Joseph Davis, contacted us and sent a screenshot of their original post: 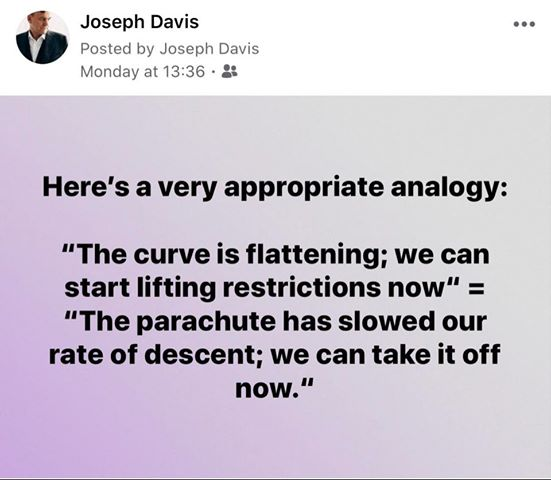 Davis credited Michael Cohen (not the lawyer, whose COVID-19 parachute analogy is embedded above and was originally posted on April 12 2020) as the meme’s originator.