The custom of women shaving their legs began when a razor company CEO in the 1910s envisioned a new market and high sales of shaving equipment.

An October 14 2020 Facebook post about the purported origins of women shaving their legs quickly became popular; it depicted a screenshot of a conversation in which one participant ascribes “capitalism” as a motive for a “1910s” razor company to single-handedly prompt a century of leg-shaving:

Lol I mean the only reason girls “have” to shave legs/armpits is bc in the 1910’s razor companies decided that they weren’t making enough money and wanted to expand to women. However, women don’t have beards, so they couldn’t use that….So they started using marketing with women who had shaved their body hair. They spread the idea that women having body hair was unclean and unsanitary, and that being hairless was sexy and desirable. Of course, this ad campaign was wildly succcessful.

And that’s literally the only reason read women “have” to shave today. Just because some razor company CEO in 1915 decided that they needed more money.

The literal only reason women shave today is because of capitalism, lol. So yeah, I’m very supportive of the idea that women can do whatever they want with their body hair lol

In the additional status update, the post’s original sharer remarked “Capitalism at it again.” However, no citations or additional reading links were included alongside the claim that leg shaving caught on so widely and thoroughly because of a single marketing initiative in the year 1915.

Although the claim about a razor company chief executive officer in 1915 was not supported with a citation, it turns out that year was considered somewhat pivotal in what would become routine removal of body hair — or epilation or depilation — among women.

A March 2020 CNN Style article about women shaving noted that before then, “removing body hair was something both men and women did — as far back as the Stone Age, then through ancient Egypt, Greece and the Roman Empire — using seashells, beeswax and various other depilatories.” That did not necessarily negate the claims of the Facebook post, but suggested that body hair removal took place at least intermittently throughout all or most of human history.

That report also addressed the year 1915 and its significance. However, it seemed a few contributing factors were involved in the adoption of leg and underarm depilation:

By the early 1900s, upper- and middle-class white America increasingly saw smooth skin as a marker of femininity, and female body hair as disgusting, with its removal offering “a way to separate oneself from cruder people, lower class and immigrant,” [author Rebecca] Herzig wrote.

In the first decades of the 20th century, changing fashions — sleeveless dresses exposing the skin — further popularized body hair removal in the US.

In 1915, Harper’s Bazaar was the first women’s magazine to run a campaign dedicated to the removal of underarm hair (“a necessity,” as it was described). That same year, men’s shaving company Gillette launched the first razor marketed specifically for women, the Milady Décolletée. Its advert read, “A beautiful addition to Milady’s toilet table — and one that solves an embarrassing personal problem.”

The shorter hemlines of the 1930s and ’40s, and a shortage of nylon stockings during World War II meant more and more American women began shaving their legs, too. The introduction of the bikini in the US in 1946 also led shaving companies and female consumers to focus on the trimming and shaping of their nether regions.

The concise excerpt above cited several reasons shaving became popular among women, among them:

The same CNN article noted that the Gillette women’s razor from 1915 didn’t cause shaving to be adopted overnight, adding:

By 1964, 98% of American women aged 15 to 44 were regularly shaving their legs. Wax strips and the first laser hair removal also debuted around then, though the latter was quickly abandoned for its damaging effects on the skin before being reintroduced decades later.

Mention of Gillette’s 1915 introduction of a razor marketed toward women, called the Milady Décolleté, appeared to be the shift referenced in the Facebook post. A 1916 advertisement for the new Gillette women’s razor described it as for use on underarms: 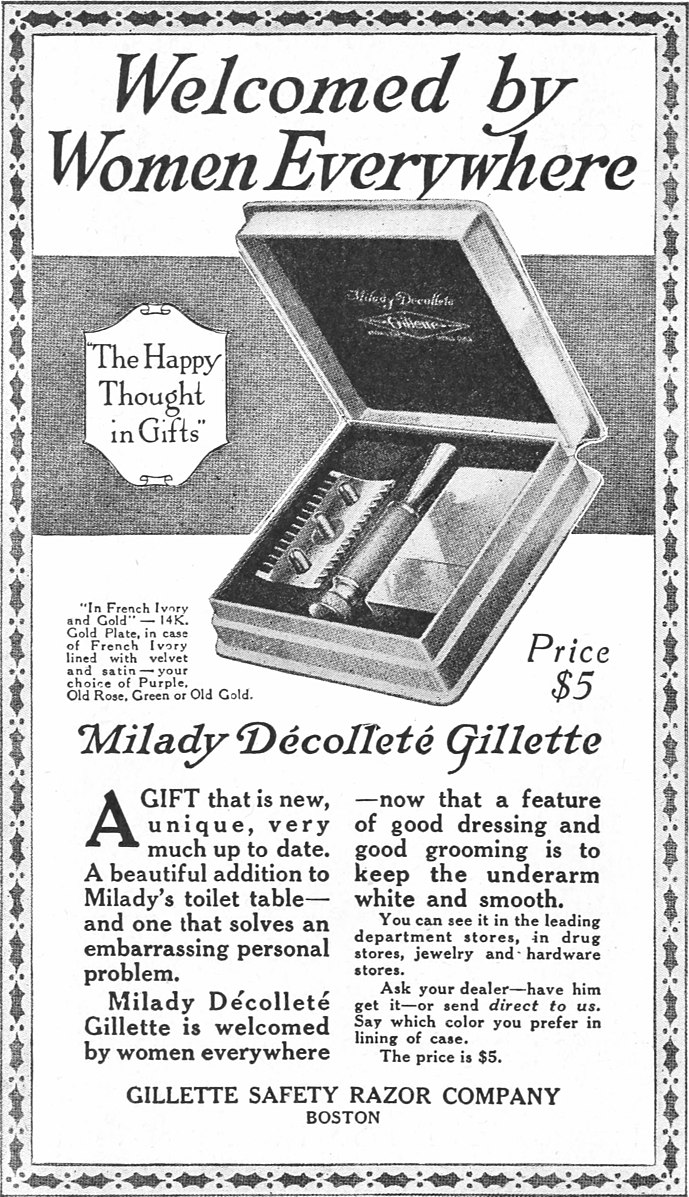 Incidentally, $5 in 1915 was equivalent to about $128 in 2020; prices for razors clearly have gone down significantly since the first women’s razor hit the market. However, that advertisement did not allude to shaving legs:

… a feature of good dressing and good grooming is to keep the underarm white and smooth.

In 1915, for example, razor-giant Gillette created what amounted to an anti-armpit hair marketing campaign to sell its inaugural female razor. “Milday Decollete Gillette is welcomed by women everywhere,” the ad read, “now that a feature of good dressing and good grooming is to keep the underarm white and smooth.”

Then they came for the legs. A World War II nylon-shortage led to women going bare-legged more frequently. The razor industry saw an opportunity and pounced—running ads encouraging women to obliterate their leg fuzz.

A very niche Wikipedia page titled “History of removal of leg and underarm hair in the United States” segregated leg hair into a separate section, providing additional nuance into the factors which influenced widespread leg shaving among American women:

The 1920s extended the hairless ideal of the armpits to the legs as well. Hemlines rose on skirts and dresses from 1910–1927. Americans wore thick dark-colored stockings at first, which were taken over during this period by flesh-colored stockings to simulate the look of bare legs, without actually being bare.

Then ads alluding to leg hair removal began. While ads between 1920-1940 do refer to legs, legs were not the focus in 90% of those ads. The first ad in Harper’s Bazaar that focused primarily on the legs appeared in 1929. The ad campaign against leg hair was not as voluminous as the campaign against underarm hair had been. However, writers for beauty magazines and books did reinforce the hairless-leg message. This had not happened in the Underarm Campaign.

Leg hair removal gained popularity after one historical event. Hosiery production plummeted suddenly in 1941 by 97% when the US War Production Board curtailed silk and nylon stockings manufacturing. In response, American ladies applied decals or “liquid stockings” (leg makeup) to simulate the seam of stockings, atop of shaved legs. Between 1942–1945, the War Production Board imposed further limits on cosmetic manufacturing, including leg makeup, taxing cosmetics as much as 20%.[3] The norm to remove leg hair for women became very strong in the 1940s, more specifically, it moved from fad to custom in a matter of months in the early 1940s.[3] A later survey, in 1964, indicated that 98% of American women aged 15–44 routinely shaved their legs.

In 2015, Vox delved into the specifics of leg versus underarm shaving in the United States in a piece titled “How the beauty industry convinced women to shave their legs,” finding:

During the 1920s, knee-high skirts made legs more visible, and depilatory companies wasted no time claiming that their products enabled “a woman to bathe stockingless, without self-consciousness.”

[Researcher Christine Hope]’s analysis shows that a relatively small percentage of ads focused on leg hair removal: in Harper’s Bazar, for example, 66 percent of the ads mentioned it, but only 10 percent made it their sole focus.

Briefly, it even seemed like depilatories might just be a passing fad. From 1924 to 1926, ads for them disappeared from the Sears catalog and McCall’s. And most of the ads were seasonal, running from around April to September — timing that suggests women mostly relegated hair removal to summer, when their underarms and legs were exposed.

By the 1940s, leg hair removal had become standard. By this point, all of the hair removal ads in Harper’s Bazar mentioned leg hair, and 56 percent focused on the legs alone, according to Hope.

As for pre-1915 body hair removal, a May 2019 article about body hair in art history explained:

More recently, female body hair has gained a political resonance as many women today forego shaving as a feminist or fashion statement … Still, archaic ideas around body hair remain hard to break. The feminine beauty standard of “the hairless ideal” has been molded and reiterated by male artists since ancient times. Female body hair was considered barbaric, uncivilized, or low-class in Greek culture. Recipes to remove hair—from plucking to shaving to sugar waxing—have existed all over the world for thousands of years.

Historian Alice Macdonald observes that in Greek art, the “smooth marble bodies” of their sculptures, “whether hairless because of artistic censure or because they reflected the social custom of depilation—have over the centuries structured the cultural imagination in such a way as to make the glabrous female body an entrenched and irresistible feminine aesthetic.” By contrast, male nudes from the same period have hairless chests, but unlike their female counterparts, sport stylized pubic hair.

Artists from the [second half of the 19th century] who engaged with the fashionable but problematic trend of Orientalism, like Jean-Auguste-Dominique Ingres and Jean-Léon Gérôme, applied Western beauty ideals of hairlessness to their exoticizing pictures of Middle Eastern and North African women. They delighted in the opportunity to portray these figures as literal sex objects—nude in the bathhouse of a harem (The Turkish Bath, 1862) or on the auction block as a sex slave (Slave Market, 1866). Even though they are not couched in Classical allegory, these women were still refused their body hair.

In short, the claim that women began shaving due to a razor company (Gillette)’s decision to “sell more” razors in 1915 harbored a follicle (get it?) of truth, but the actual history of hair removal in and outside the United States was far more nuanced and far ranging. Intentional removal of body hair spanned cultures and millennia in human history, as evidenced by much of the history of art. Shaving was indeed less common when women were unlikely to bare their legs or underarms, gradually phasing in as part of grooming when sleeveless dresses and shorter hems appeared. World War II’s shortage of nylon appeared to solidify regular shaving of legs among women in Allied nations, and the trend stuck.