The graphic, which was originally posted by poet Andrea Gibson on Instagram, reads:

Mike Pence signed a bill to jail same-sex couples for applying for a marriage license.

Mike Pence insisted that the Matthew Shepard hate crime bill was the product of a radical social agenda.

Mike Pence served, enthusiastically, on the board of an antigay group. 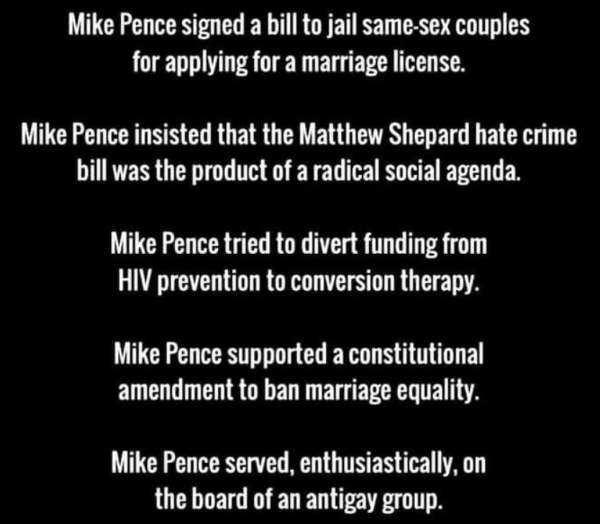 But while Pence does have a track record of opposing civil rights advances for non-cishet communities — he was reportedly a key figure behind U.S. President Donald Trump’s order banning transgender Americans from serving in the military, for example — we found mixed results, all told, for the claims made in the meme.

Mike Pence signed a bill to jail same-sex couples for applying for a marriage license: False.

This claim had previously been debunked by the fact-checking site Lead Stories, leading to a notice being placed on Gibson’s post.

Pence had not yet been elected governor of Indiana when state lawmakers passed a bill in 1986 limiting the legal definition of marriage under state law to male/female couples, or eleven years later, when a separate bill passed banning the recognition of same-sex marriages granted in other states.

However, as governor Pence did support a 2013 update to the latter law, adding additional penalties for same-sex couples to fill out a state marriage license by treating it as an attempted “falsification.”

Mike Pence insisted that the Matthew Shepard hate crime bill was the product of a radical social agenda: True.

As USA Today reported at the time, Pence and other Republican lawmakers objected to the passage of the Matthew Shepard and James Byrd Jr. Hate Crimes Prevention Act because it was included as part of a defense funding bill. Then-President Barack Obama signed the bill into law on October 28, 2009.

“The president has used his position as commander in chief to advance a radical social agenda, when he should have used it to advance legislation that would unequivocally support our troops,” said Pence, who was at that point chairman of the House Republican Conference.

Pence was also reportedly concerned that the law — named after two victims of fatal hate-related attacks — could be used to infringe on the “free speech” of religions that considered homosexuality a sin.

As BuzzFeed News reported in 2016, this stance was listed on Pence’s website promoting his successful congressional campaign in 2000:

Congress should support the reauthorization of the Ryan White Care Act only after completion of an audit to ensure that federal dollars were no longer being given to organizations that celebrate and encourage the types of behaviors that facilitate the spreading of the HIV virus. Resources should be directed toward those institutions which provide assistance to those seeking to change their sexual behavior.

Mike Pence supported a constitutional amendment to ban marriage equality: True.
Pence was one of 121 Republicans who co-sponsored a September 2004 House resolution that “marriage in the United States shall consist only of the union of a man and a woman.”

The bill, which was introduced by Oregon Republican Rep. Marilyn Musgrave, would have also prohibited “the Constitution or any State constitution from being construed to require that marital status or its legal incidents be conferred upon any union other than that of a man and a woman.” It failed to gain the necessary two-thirds majority to pass.

Mike Pence served, enthusiastically, on the board of an antigay group: False.
We could not find a record of Pence serving on any boards of anti-gay or homophobic groups, but that does not mean that he has not interacted with them during his career.

For instance, Pence spoke at the 2018 “summit” for the Family Research Council, which has been designated as a hate group by the civil rights organization the Southern Poverty Law Center. According to the SPLC:

The FRC often makes false claims about the LGBTQ community based on discredited research and junk science. The intention is to denigrate LGBTQ people as the organization battles against same-sex marriage, hate crime laws, anti-bullying programs and the repeal of the military’s “Don’t Ask, Don’t Tell” policy.

To make the case that the LGBTQ community is a threat to American society, the FRC employs a number of “policy experts” whose “research” has allowed the FRC to be extremely active politically in shaping public debate. Its research fellows and leaders often testify before Congress and appear in the mainstream media. It also works at the grassroots level, conducting outreach to pastors in an effort to “transform the culture.”

In August 2019, Pence gave a speech to another anti-LGBTQ group, the Alliance Defending Freedom, and was mocked online after calling on members to “spend more time on [their] knees than on the Internet.”

More recently, Pence spoke at an event hosted by self-described Christian activist Bob Vander Plaats in Iowa. The Human Rights Campaign (HRC) speculated that Pence’s appearance could have been a prelude to his own presidential campaign in 2024. The HRC also listed a series of homophobic remarks that Vander Plaats has made in the past:

In a 2011 interview, Vander Plaats said homosexuality was “a public health risk,” continuing on to say “If we’re teaching the kids ‘don’t smoke’ because that’s a risky healthstyle, the same can be true, too, with the homosexual lifestyle.”

Vander Plaats also joined a letter titled “Minister’s Marriage Letter to the Iowa Legislature” saying that “Homosexual behavior is defined by the Bible as immoral and sinful. (Lev.18:22) It is harmful both to the individuals who choose to participate in it and the society that chooses to accept it. (Romans 1:18-26) Given that understanding, the only truly loving response to the current debate over marriage is to reaffirm the only definition of marriage in Iowa Code – one man and one woman.”

We found three of the statements in this meme to be true and two to be false; therefore, we rate the claims made in this graphic in their entirety Mixed.